For some background info on lake stratification, see this page.

Vertical profiles of temperature, oxygen, electrical conductivity, and pH were obtained at 3 locations on Oct 3, 2017, at one location (at precisely the deepest spot in the lake) on Sep 30, 2019 and on Apr 19, 2010. View Methods.

Profiles at Sites 1 and 2 were similar with a distinct surface layer in the top 7 m, and then continuous declines in temperature and oxygen, and increases in conductivity to the bottom. It’s likely that in the summer when surface water temperature want up to 25 degrees C or higher, there were distinct surface and deep layers (epilimnion and hypolimnion) with a thermal gradient between them (the metalimnion), and that on Oct 3, that 2 -layer systems was in the process of breaking down.

(i) There is a distinct gradient in conductivity (a measure of dissolved ions).

(ii) For the deepest profile (Site 1), the oxygen content of the deeper layers (2.25 mg/L)  is below guidelines for both salmonids and more generally, aquatic life.  The 2017 value is less than half of the  value obtained on Aug 30 1971  when the lake was still in the oligotrophic range (that’s the only comparable historical data for Sandy Lake). 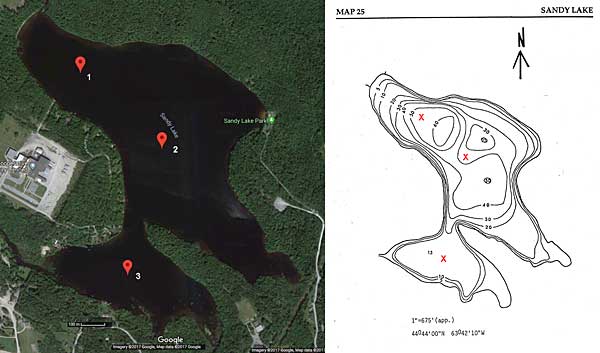 Location of three sites at which limnological profiles were obtained on Sandy Lake; bathymetric map at right . (Bathymetric map from P. Mandell, 1994. The effects of land use changes on water quality of urban lakes in the Halifax/Dartmouth region. MSc thesis, Dalhousie University.
Click on image for larger version

Using the same equipment and procedure, Ed Glover obtained these profiles at the deepest point in the lake on Sep 30, 2019: 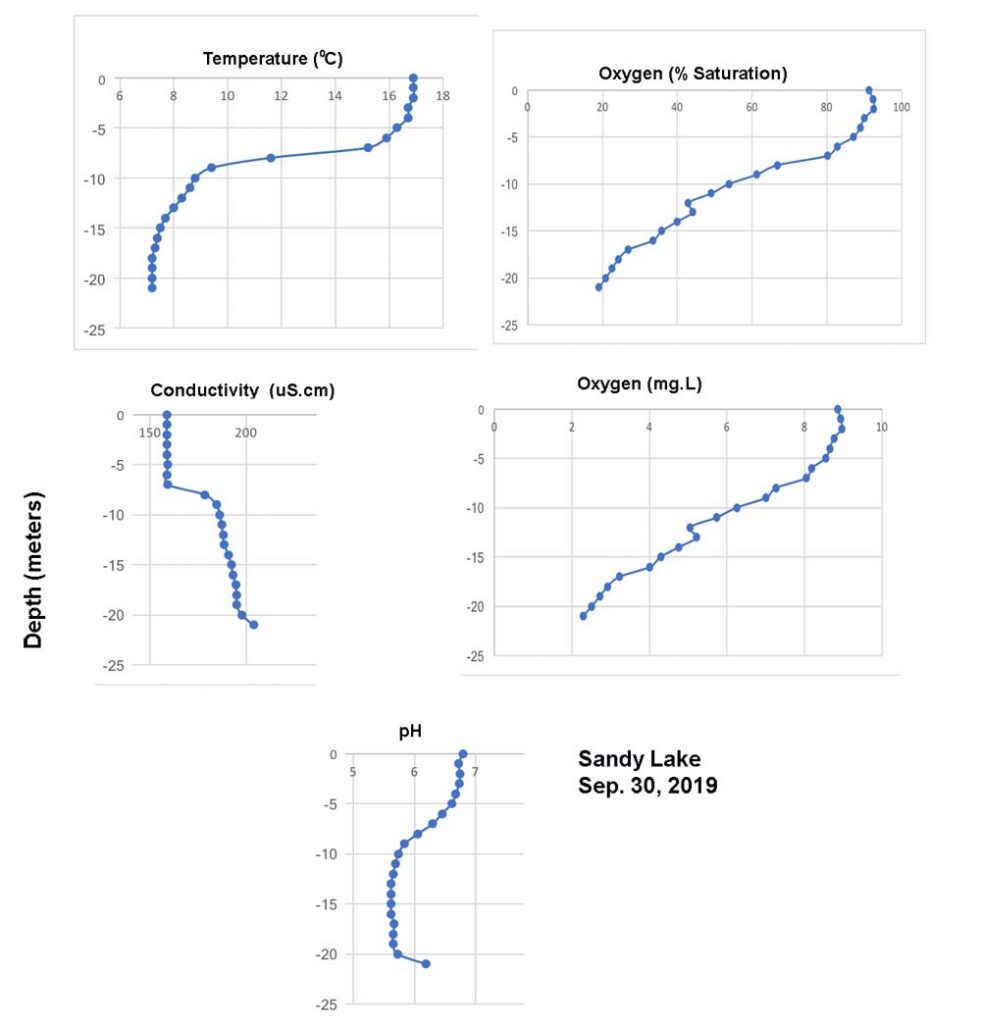 These observations were at a deeper point than sampled at nearby site 1 in 2017.

The overall patterns are similar to those for site #1 above with low O2 and saltier water in the deepest layer (hypolimnion).

It also appears that the profile on Sep 30, 2019 was still in its summer, full stratification mode, while on Oct 3, 2017 it appeared to be breaking up.

Without measurements of chloride in the water, it cannot be said with absolute confidence that the higher  EC in the hypolimnion compared to the epilimnion is entirely due to road salts.  Mobilization of iron and manganese (and phosphorus) under anoxia  is another possibility, however, the hypolimnion oxygen values on these two profiles, while low for salmonids,  were still above 2 mg/L, the value generally cited for “hypoxic” water (e.g., from Nurnberg 2004: “2 mg L–1 measured by a DO probe about 1 m above the sediment usually coincides with anoxic conditions at the sediment surfaces located at that depth”. Such mobilization results in EC increases up to 30-40 uS/cm (e.g., Mortimer, 1942; OME 1993); the difference top to bottom in  2017 was about 80 uS/cm, in 2019 about 40 uS/cm.

Some pertinent chemical data are available for 1998:

Samples taken at the surface, in the thermocline at 7 m depth, and at the bottom (18 m) on Sep 2, 1998 illustrate differences in EC and chloride, with equivalent differences between the surface and bottom for both EC and chloride: 34/29*125=146.6, i.e. changes in chloride appear to account for the differences in Electrical Conductivity. At the same time, there is some evidence for some mobilization of iron, manganese and phosphorous in the hypolimnion at an oxygen concentration of 3 mg/Lin early September. 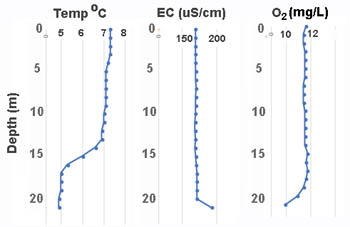 The Exchange of Dissolved Substances between Mud and Water in Lakes
Clifford H. Mortimer 1942. Journal of Ecology 30: 147-201