“EC” is shorthand for Electrical Conductivity.  It is a property of water routinely included in water quality measurements. Along with temperature and oxygen (and sometimes pH) it is one of the basic variables that is measured with multiparameter water-quality instruments to characterize “vertical profiles” of lakes.

If all of the major ions (cations and anions) are measured, a “Theoretical Conductivity” can be calculated. Typically the calculated values are very close to observed values; if not it’s an indication that something has been missed in the ion analysis, e.g., metals that could be entering surface waters from  mining operations.

EC is influenced by temperature. So for precise comparison of EC values, EC values should be adjusted to a standard temperature.

*From Conductivity, Salinity & Total Dissolved Solids: What is Conductivity on fondriest.com; except that the lowest value for freshwater streams was changed from 100 to 25 to better represent values in Nova Scotia. Most lakes without significant development or seawater influence  in NS have values in the range 30 to 400 uS, the higher values commonly associated with lakes in areas of gypsum or limestone deposits. In the Halifax area, EC values of pristine lakes and associated streams are typically fall within the range 30-60 uS/cm.

Sources of conductivity. To Add

Conductivity, Salinity & Total Dissolved Solids: What is Conductivity?
On fondriest.com

CAN YOU DETERMINE WATER HARDNESS FROM CONDUCTIVITY OR TOTAL DISSOLVED SOLIDS MEASUREMENTS?

https://www.mt.com/dam/mt_ext_files/Editorial/Generic/7/Paper-THOR-Gray-CONDUCTIVITY_Editorial-Generic_1201100849793_files/iwc_06-29_gray_conductivity.pdf. A Comprehensive Look at Conductivity Measurement
in Steam and Power Generation Waters

file:///Users/davidpatriquin/Downloads/Bhateria-Jain2016_Article_WaterQualityAssessmentOfLakeWa.pdf
EC (electrical conductivity)
Conductivity shows significant correlation with parameters such as temperature, pH value alkalinity, total hardness, calcium, total solids, total dissolved solids and
chemical oxygen demand chloride and iron concentration
of water. Conductivity in streams and rivers is affected
primarily by the geology of the area through which the
water flows. Streams that run through areas with granite
bedrock tend to have lower conductivity because granite
is composed of more inert materials that do not ionize
(dissolve into ionic components) when washed into the
water (Gupta and Paul 2010). Streams that run through
areas with clay soils tend to have higher conductivity
because of the presence of materials that ionize when
washed into the water. Ground water inflows can have the
same effects depending on the bedrock they flow through.
Discharges to streams can change the conductivity
depending on their make-up. A failing sewage system
would raise the conductivity because of the presence of
chloride, phosphate and nitrate; an oil spill would lower
the conductivity.

The presence of chloride (Cl–) where it does not
occur naturally indicates possible water
pollution. Chloride does not affect plant and
algae growth and is not toxic to aquatic
organisms at most of the levels found in
Wisconsin. Chloride is not common in Wisconsin
soils, rocks or minerals, except in areas with
limestone deposits. Figure 7 shows the
geographic distribution of chloride in Wisconsin
lakes.
Sources of chloride include septic systems
(chloride values of 50 to 100 mg/l are common in
septic tank effluent), animal waste, potash
fertilizer (potash = potassium chloride), and
drainage from road-salting chemicals. Increases
in chloride, either seasonally or over time, can
mean that one or more of these sources is
affecting the lake.
An increase in chloride from human or animal
waste suggests that other nutrients are also
entering the lake. Higher chloride concentrations
from spring to fall may be the effect of lawn
fertilizer runoff or septic systems during heavy
use by summer residents. Higher values in
spring after the snow melts may signify runoff
from drainage basins or highways as a major
source of chloride. Since lakes vary in their
natural chloride content, it is important to have
background data or a long term database to
document changes.

Regeneration of dissolved substances in a seasonally anoxic lake:The relative importance of processes occurring inthe water column and in the sediments

http://aquaticcommons.org/5193/1/1984_52_davi_trea.pdf TREADING IN MORTIMER’S FOOTSTEPS: THE GEOCHEMICAL CYCLING
OF IRON AND MANGANESE IN ESTHWAITE WATER

The electrolytic conductivity of pure water equilibrated with atmospheric CO2 is typically
taken to be 1.05 µS/cm
https://www.nist.gov/system/files/documents/srm/260-142-2ndVersion.pdf

…Why is pH measured in the first place? A good case can be made that in pure water it is
unnecessary to monitor pH since a conductivity measurement is simpler and assures high
purity. For example, if the conductivity is less than 0.06 µS/cm then the pH must be
between 6.9 and 7.2—the extremes possible with strong acid and base contaminants,
respectively. This pH vs. conductivity relationship has been documented in graphic form
for strongly ionized acids and bases and for weakly ionized carbon dioxide and ammonia
typical of power plant samples.1,2,3

Measuring the pH of pure water is difficult because of inherently low
solution conductivity (between 0.056 and 10.0 microSiemens/cm) or
resistivity (between 18.2 and 10 megohm–cm at 25ºC). Several
problem areas can lead to gross measurement errors in this type of
application. Eliminating these potential interferences requires special
measurement considerations.
Why Do We Need to Measure Pure Water pH?
The measurement of pure water pH can be one of the quickest indicators of process contamination in
the production or distribution of pure water. The presence of gaseous contaminants such as air or
carbon dioxide will shift the pH of the pure water, indicating air or gas intrusion into the process line.
The exhaustion of resin beds used to prepare or polish pure water can introduce contaminants that will
cause a shift in pH. These resin beds are typically cation and/or anion exchange resins in a hydronium
ion form (cation exchange) or hydroxide ion form (anion exchange). While conductivity measurements
will clearly indicate an ionic leakage, pH measurement changes can be diagnostic as to which resin is
exhausted. If the pH increases, the cation resin bed is becoming exhausted; if the pH decreases, the
anion resin bed is becoming exhausted.
Boilers require pure water to reduce scaling and 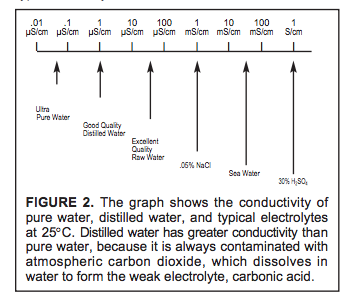