A “pit and mound topography” is found throughout much of the forest at Sandy Lake and Environs and reveals an ‘old process’ of development towards an old growth state interrupted by wind disturbance. It’s a process that can be seen continuing today in blowdown of big trees initiated by Hurricane Juan.

These processes are especially pronounced in this forest close to Atlantic coast where hurricanes coming from the south first make landfall in N.S. 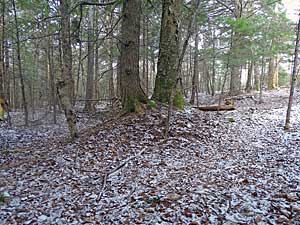 In places, the pit and mound structures occur in a repeated series with the long axes of mounds oriented perpendicular to the direction of wind that blew the trees down; walking across them in the direction of the wind is something akin to swimming or paddling through a set of swells on the ocean.

The mounds were formed by blowdowns of very large trees, which I estimate occurred about 150 years ago at many sites. The mounds are preferred ground for establishment of tree seedlings, and most of the big trees we see today are found on top of mounds.

The pits often develop as vernal (temporary) pools, providing habitat for amphibians and other organisms requiring water for part of their life cycle. As the trees grow old and mounds erode, the tree roots are exposed creating cavities for wildlife between the roots and the trunk.

The direction in which the a tree fell when a mound was formed historically can be inferred from the orientation of mound and the associated pit. In Thirty-Eight, The Hurricane that transformed New England, Stephen Long describes it this way, talking about the field work of plant ecologist Charlie Cogbill:

His fieldwork made him an aficionado of blowdowns, and seventy-five years after Thirty-eight blew through, he could point out signs of its passing. The most common sign is the undulating ground where tip-ips (uprooted trees) transformed the forest floor. The ground in hurricane woods is poskmarked with deep depressions adjacent to correspondingly large mounds. Known as pit-and-mound topography, it looks as though somebody dug a hole and piled the dirt next to it, and it happens anytime the wind uproots a tree. The rootball of a forest tree forms a plate, and when wind knocks the tree over, the roots are wrenched out ofthe ground with only a hinge of roots maintaining it attachment to the ground, A the rest of the roots rip free, they grasp a mass of soil and stone, excavating a hole. The bigger the tree, the bigger the pit.

Over time, the roots and stump decompos, leaving a mound of earth. The pit collects leaves yearly, but the decompose without filling in the hole to any grate extent. Decades after the tree went down, you can stand in the pit, look out across the mound, and that’s the direction that the tree fell. In most tip-ups, the fatal gust of wind catches the trees soil so it keels over in line with the wind direction.

Using that simple guideline, I estimated directions of tree-fall (blowdown) for pits and mounds at the five old forest sites for which we had some ages of the trees, also for recent windfalls at or close to those sites. I chose only the mounds where there is still a distinct pit today, reading the direction from a Silva compass corrected for magnetic declination. I also measured directions of fall for recent blowdowns which were likely initiated by Hurricane Juan. Observations conducted Oct 20 and Nov 1, 2017.

The results are shown in the diagram below. 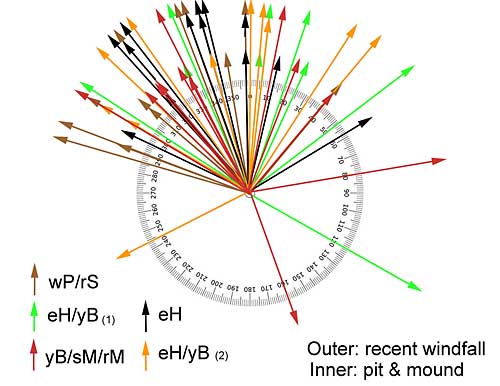 The directions are consistent with the blowdowns being associated with hurricanes coming from the south. Independently, Bob Guscott, a retired DNR forester, observed very similar patterns for directions of blowdowns (with a N/NW bias) inferred for mounds in the area of Grand Lake (Oakfield, N.S.). Subsequently, we got together and refined the method for inferring direction so it could be applied to situations in which are unsure on which side of a mound the pit occurs. (View video). We also came up with a statistic for describing the frequency of mounds on the landscape (below).

These are some very preliminary descriptive stats. 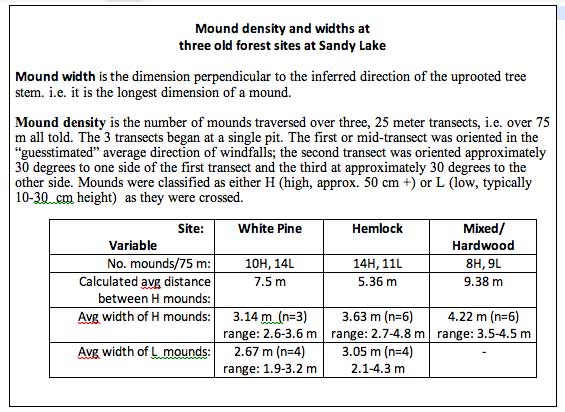 Was this Woodlot once Farmland? Pit and Mound Formation will tell you
by Mike & Debbie Hickey in their From the Woodlot video series, N.B. Posted May 5, 2020. Nice description of a recent windfall, and showing an area of pits and mounds in their woodlot which they contrast with flat topography over most of the area.

Patterns of pedoturbation by tree uprooting in forest soils
Bobrovsky M.V., Loyko S.V. Russian Journal of Ecosystem Ecology Vol. 1 (1). 2016. A descriptive article with photos. It references classic research by E.V. Ponomarenko who has been working in Nova Scotia recently.

Woodlands shaped by past Hurricanes
By David Dwyer, Forester NSDNR. 1979
“Many of our forest stands in Nova Scotia are a result of past hurricanes. Mounds on the forest floor -the result of uprooted trees – indicate this. The age of trees growing on these mounds give a good indication of when the storm occurred. These stand ages compare well with the written records of past storms…”

UNEVEN GROUND
BY AKIVA SILVER, “an excerpt from my book Trees of Power published by Chelsea Green” It begins: “Here in upstate NY there are hills everywhere but the ground upon them is flat. The fields of our hillsides are easily mowed and grazed. They were smoothed out a long time ago when they were first cleared and plowed. It did not always look like neat rolling hills here. Ancient hardwood forests created a ground so uneven, textured, and three dimensional, that it resembled mogul ski runs. These types of forest floors still exist today on the steepest hillsides that have been woods for centuries. Walking in an old forest around here is more like climbing up and down pits and mounds of soil than strolling down a trail. The topography is so intricate that one hillside is actually made up of thousands of micro hills and valleys.”

If an Old Growth stand in Nova Scotia blows down, is it still Old Growth?
David P on NS Forest Notes, Feb 4, 2019. “My answer, Yes, if the blowdown is not removed (e.g. as a salvage harvest)”

Pits and Mounds: Diminished Elements in a Second-Growth Landscape
Harvard Forest post Sep 28, 2017. “The history of forest clearance for agriculture and repeated logging of the rest of New England forest erased many pits and mounds from the landscape. The smaller size of trees in second-growth forest now limits the stature of new pits and mounds.” View related paper

Forest structural attributes after windthrow and consequences of salvage logging
Kaysandra Waldron et al., Forest Ecology and Management Volume 289, 1 February 2013, Pages 28-37 “In the eastern boreal forest of Quebec (Canada) windthrow is a major natural disturbance, given the long fire cycle interval…From an ecosystem management perspective, retention patches with dead wood and standing living trees should be kept in salvaged cut-blocks. To minimize salvage operation effects on microtopography, machinery trails should be reduced to a minimum. Also, a certain proportion of windthrow should be exempted from logging operations.”