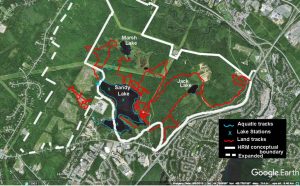 The area clearcut in 2013 is just west
of Sandy Lake.Google image is in 2015.
Click on image for larger version

About 200 acres (81 hectares) of private land in the “expanded” SLPRP just west of the dairy plant were clearcut in the spring/summer of 2013 to the shock of many. A protest was held which purportedly caught the developer’s ear and he agreed not to do any further cutting. View Clearcutting to stop around Sandy Lake – News 95.7, Sep 23, 2013).

Google Earth images of the clearcut area illustrate the change in cover between 2004/2005 and 2016/7. Roads and some initial cutting occurred between 2005 and 2010. The big cuts occurred fairly quickly in 2013. Also view Global Forest Watch maps. 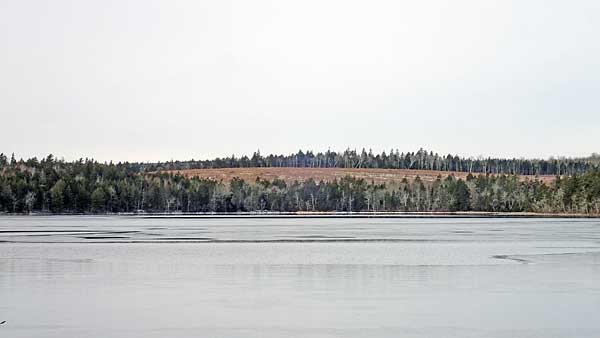 One patch of the clearcut viewed from Sandy Lake beach Dec 18, 2017
Click on photo for larger version 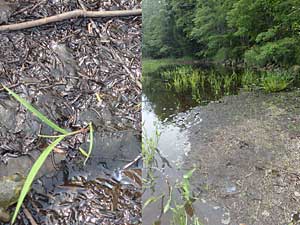 According to a resident by the lake, there was no noticeable siltation of the lake from this clearcut. However, visual observations in 2017 revealed large accumulations of chips/mineral debris around the mouth of Karen’s Brook, extending on the shore towards Peverill’s Brook. View Karen’s Brook/NW Beach. This contributes to further eutrophication and is evidence of the inadequacy of the 20 m buffer zone. 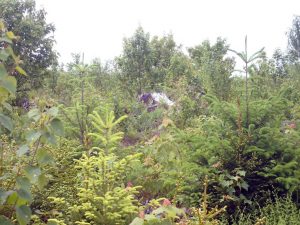 Vigorous regrowth in the clearcut; large stump.
Click on photo for larger version

Fortunately most of the the clearcut area is exhibiting strong regeneration with the full suite of Acadian forest species well represented, so left alone, a healthy forest should re-emerge.

Clearcuts are susceptible to invasive species and I did observe Rosa multiflora amongst the mix coming up. Otherwise, I have not seen this species at Sandy Lake. It becoming plentiful in disturbed habitats in the Halifax region, e.g. in Point Pleasant Park.

Clearcuts are required to follow minimal regulations, amongst them 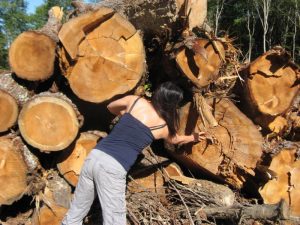 Some of the logs taken off land clearcut in the
summer of 2013. Photo by B.Sarty

Accordingly, the contractors who conducted the clearcuts left largely uncut buffer strips adjacent to streams that ultimately flow into Sandy Lake. These riparian buffer strips function as conservation corridors, although they are too narrow for species such as the ovenbird that are restricted to forest interior areas; also, there is blowdown at the edges further reducing their widths.

I say “largely uncut” because I observed stumps of recently cut trees within the riparian buffer strips; they could have been cut by people other than the contractors. As well, trees were cut right down to a stream at one point which evidently was where a temporary bridge was constructed to allow movement of vehicles across the stream. Perhaps that was unavoidable (they had to cross somewhere), but the fact remains that it was sloping ground and a lot of clearcut debris was found around the mouth of the stream in Sandy Lake. View  Pic. 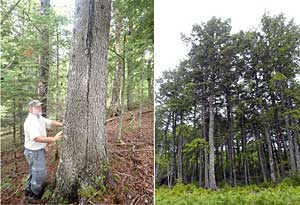 Forest in two stream corridors on opposites sides of a clearcut
Left: with large hemlock (57 cm; stumps nearby of this circumference are 100+ years old); also big yellow birch, maples, red spruce.
Right: spruce and hemlock, maximum dbh about 35 cm. DS said his dad harvested in this area in the 1950s, but it was selective cutting, not clearcuts.
Click on image for larger version

What was cut: There are a lot of large stumps, some with annual rings still distinct enough to count. Several that I observed were more than 100 years of age. A large portion of what was cut was a mature, mixed, multi-aged Acadian forest. Some was mostly coniferous spruce/hemlock forest that was selectively harvested up to the 1950s, perhaps later in some areas.

Clearcutting is quite different from selective cutting, or even from ‘highgrading’ (taking out only the biggest trees) which still leave the soil and habitat largely intact. Fortunately, most of the cutting that has occurred within Sandy Lake and Environs historically has been selective cutting. Much of that was likely done in the winter with horses so was even less damaging than selective cutting conducted today with larger machinery and requiring access cuts.

These albums, posted on Google Photos, provide some of the observations on which the description above is based.
You can start at the beginning of an album and go through it quite quickly, pausing as you might wish, e.g. to enlarge a photo for closer examination. Click on the i-icon at the top right of the first photo to bring up descriptions and Google map locations of the photos.