Every excursion I make into the Sandy Lake/Jack Lake lands (“Sandy Lake & Environs”)  seems to offer a new gem. An excursion on June 1, 2018 was no exception.

I had been intending to check out a drumlin northeast of Jack Lake and was stimulated to do so sooner rather than later by a conversation with a naturalist who frequented the area in his youth, about 35 years ago. He  told me  there were some big disease-free beech on that drumlin in those years. 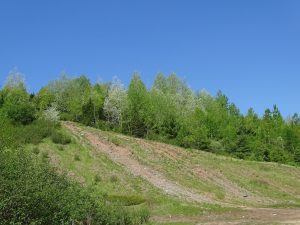 So on June 1st, DS, my frequent walk companion,  and I took a walk up the “sand pit road” and just headed  towards the hardwoods we could see in the distance. We followed wide and narrow paths maintained by ATVs and/or mountain bikes (neither present at the time). It was easy walking.

We passed through early successional hardwood forest with lots of big toothed aspen, white birch, ash and red maple and pretty quickly into older, mixed forest  as we climbed upward. The loud songs of ovenbirds told us we had passed from forest edge to forest interior. 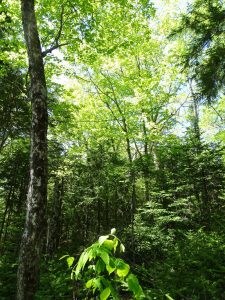 We marvelled at the mix of hardwood and softwood species including hemlock (largest 30″/76 cm dbh), red spruce (largest 20″/51 cm dbh), yellow birch (largest 25″/64 cm), red and sugar maple (largest for both 16″/41 cm) and to a lesser extent, beech (largest 17″/43 cm) forming the canopy, and striped maple a subcanopy.  Fir was common, but most were only 3 to 8 ft (1-2.5 m) height; these firs had been waiting, probably for decades, for a gap to form.
_________
* We measured or estimated diameters of all trees ~16″ and larger observable within 5-10 m of our route, occasionally we went slightly off route to measure a particularly large or interesting tree visible in the distance, like a 19″ oak.

There were thick, straight, moss- and lichen-covered, cankerous  beech snags (dead trees or portions of trees, still upright), and many smaller living  specimens which also cankerous (from beech bark disease, introduced via Halifax in the late 1800s);   most were already showing the presence of  leaf minor, a pest that arrived in Nova Scotia only recently. We were not seeing the large, mostly disease-free living specimens my naturalist friend had viewed 35 years earlier. 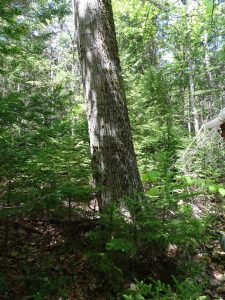 Surprisingly, over much of the area higher-up, red oak was in the mix, one specimen was 19 inches (48 cm) dbh. I have seen only the occasional red oak through most of the area of Sandy Lake and Environs, but here it was part of the softwood/hardwood mix. That’s also a bit unusual in the Halifax area where more often red oak dominates or is a component of hardwood stands on drier sites. Red oak is not  cited as one of the “regulars” of mixed Acadian forest stands, but here it was.

There was plentiful dead wood still upright (“snags”) and peppered with woodpecker holes as well as on the ground (“coarse woody debris”) in all stages of decomposition. There were now well decomposed stumps from past harvesting, but there were not many to be found, and none were recent. 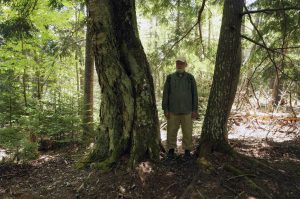 Intimate pair of yellow birch (left) and
a smaller hemlock (right) on a mound.
June 1 was a 29 degree day, but it was
a pleasant 20 or so in these woods.

A pit and mound topography occurred over much of the area, indicating a long history of big trees and wind disturbance. We  viewed a number of instances of the Acadian Forest Love Affair, the association of large yellow birch and hemlock on a mound.

Overall, the forest could be described as mature, mixed, multi-aged forest with patches of Old Growth.

Finally we stopped climbing upwards. I could see in the distance an opening with a very large snag. 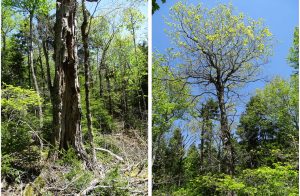 As we got closer, I could see it was an old beech; it was 86 inches (2.2 meters) circumference/27 inches (69 cm) diameter at breast height. A living beech nearby was 17 inches (43 cm) dbh.  It was living but hardly thriving; leaf minor was present, so likely the tree had been invaded a year or more earlier, accelerating its decline.

I figured we had found the old beech my friend had talked about. It was sad not to see thriving beech, but overall this was (and is) an incredibly healthy, mixed, multi-aged, multi-layered Acadian forest with a lot of resilience. 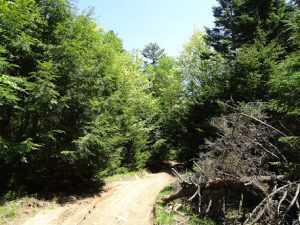 We walked back via a different route, down a wide path kept open by ATVs. As we descended towards the south, hemlock were more and more abundant, and finally we reached the spectacular hemlock dominated Moraine Brook Forest I had explored last fall, another gem.

I still have a few areas within Sandy Lake and Environs to explore and am fully expecting to find a few more gems!