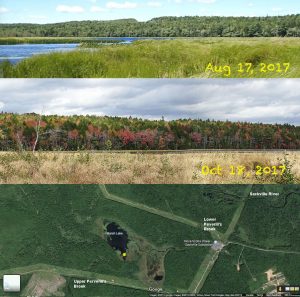 Glimpses across Marsh Lake in 2017.
The approx. vantage point is shown in the Google map
Click on image for larger version

This serene marshy lake is surrounded by forested drumlins and the only hint of our busy world is a power line which is visible (but not unsightly) from some vantage points.  The noise of civilization is highly muted, if not absent (it depends on the winds).

I had viewed Marsh Lake from south of the lake  in 2017, but it wasn’t until Oct 9, 2019 that I walked some of the northern shore. I did so with a friend, Bob K.,  from the NS Wild Flora Society

We got there via a powerline to the north, passing through hemlock dominated forest as we proceeded south down the slope of a large drumlin.  As we approached the lake, we entered into some low lying damp forest and then, just before we reached the marsh that borders the lake, we encountered what seemed to a be a dyke or levee. It is 2-3 m wide;  on the marsh side it rises up about 2 meters from the wet marsh, on the forest side about a meter from the forest floor. 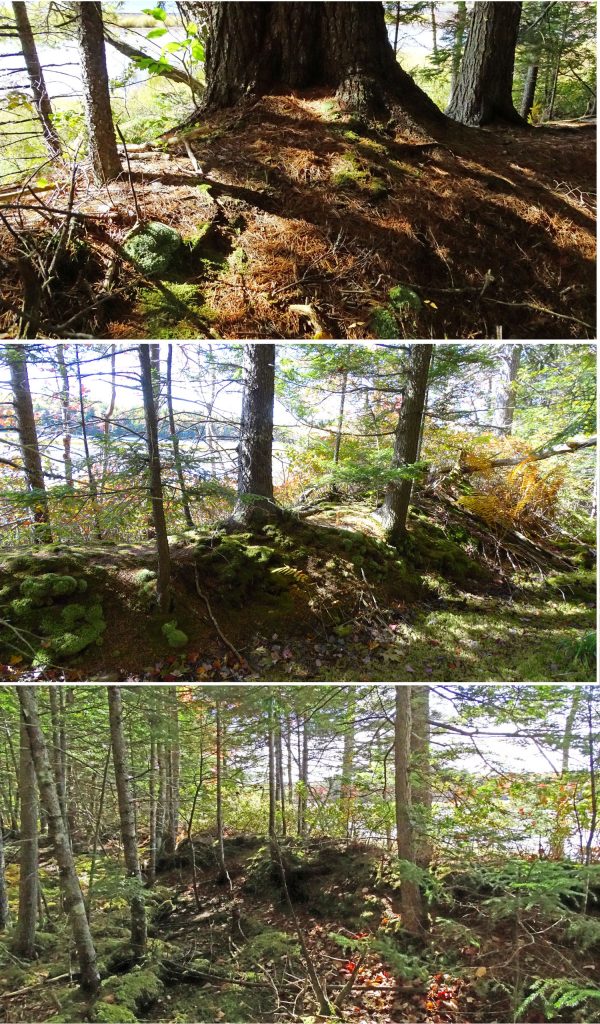 Views of the dyke

We walked along the dyke  from east to west to the northwest corner of the lake (see map below).  We were especially struck  by the very large (> 2ft or 50 cm diameter) white pines  and hemlock that occur  on top of the dyke periodically along that route; they were much larger than anything in the immediately adjacent, low lying forest. The pines were all the more notable because we had seen no pines in any of the forest we had just traversed (hemlocks were common);  pines could be seen, however,  on the south side of the lake.

We speculated that the dyke might have originated as a brush pile built up with trees cleared to make land for crops or pasture. Bob scratched away at the surface and was able to stick his whole arm in without a lot of difficulty; the soil was light and fluffy much as we would expected if it developed from decomposing brush – it clearly wasn’t built up from marsh sod. It wasn’t  squishy, and seems to be maintained by roots of the trees on the dyke.

In one spot there was an accumulation of rocks much like you see in  rock piles in pastures. 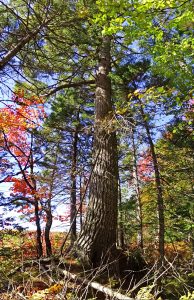 We walked approx. 217 m of the dyke as illustrated in the Google Earth image below. Along that route, a margin with larger trees seems distinguishable on the Google image and appears to extend at least another 175 m to the south east.

Clearly the dyke is a man-made structure. Bob suggested that we could estimate its age from the age of the biggest trees.

I thought  it might have been constructed to create a mill pond and I referred to the Sandy Lake Community Profile* for info on historical land use in the area.
______
*Prepared by Dalhousie & NASCAD planning students in 2002

According to local residents’ accounts, the harvesting of timber in the Sandy Lake area has been occurring since the late 1800s. Much of the lumber cut in the Sandy Lake, Marsh Lake and Jack Lake area over the next several decades was destined for the sawmill and box factory at the Moirs Site (Robertson, 1983). The Nine Mile River, dammed by a 1,700-foot wooden structure, flowed through a turbine to provide the 400 horsepower needed by the complex. Logs cut in the Sandy Lake area floated through Sandy Lake to Marsh Lake and Peverell’s Brook to the Sackville River. Upon reaching the Basin, they were boomed until being processed in the mill. Dams for gathering logs were constructed in the stream connecting Sandy and Marsh Lakes, and below Marsh Lake. These dams remained into the mid-twentieth century, local residents recalled. 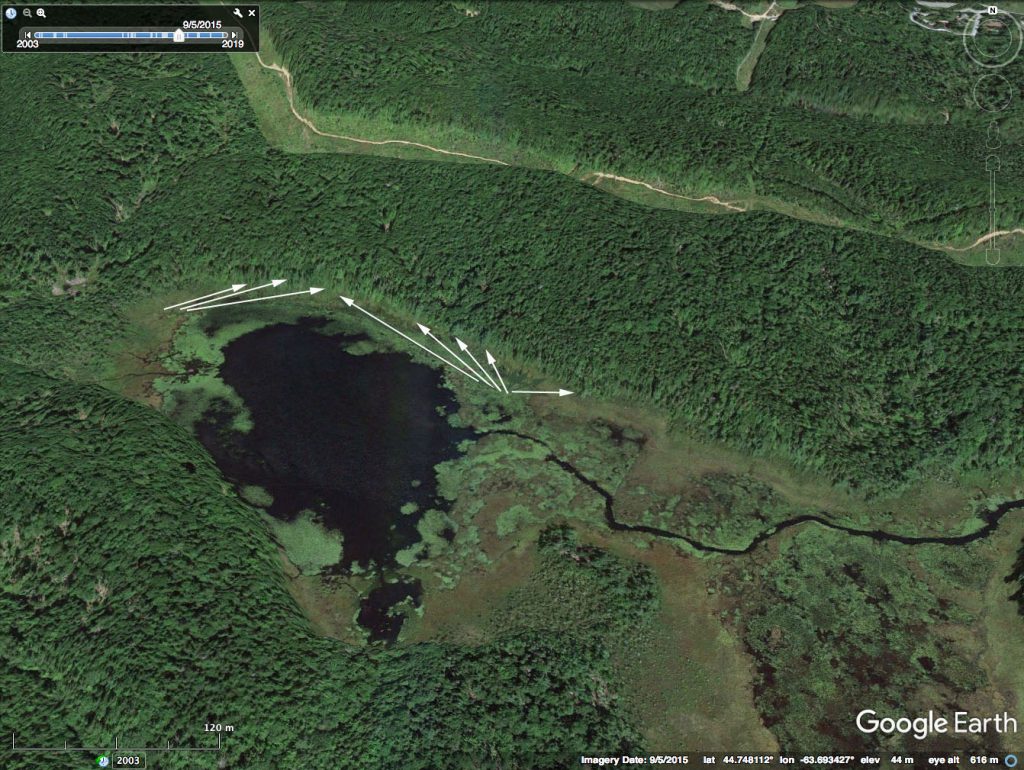 Google Earth Image. Arrows point to the section of the tree lined dyke that we walked.

So it seems likely that the dyke did indeed serve to raise the water level in Marsh Lake, but for the purpose of floating logs, not to run a mill. As the lake exists today, it would probably be difficult to move logs though it because of the extensive, shallow fringing marsh.

An intriguing question remains: were the large trees that we see there today deliberately planted? It seems it is the trees on the dyke that have maintained its structure.

Or did the dyke simply supply a very good habitat by virtue of being raised (like the mounds in pit and mound topography) and well exposed to sun, and that allowed trees to seed and establish naturally on the dyke,  and some to grow very large?

And how old are those Big Trees?

There are likely folks in the area who have some of the answers. 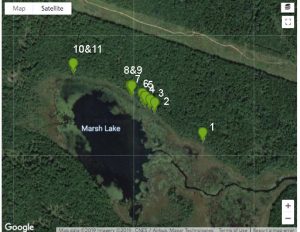 From iNaturalist.Google map
Big Trees are those with a diameter
at beast height of 20″ and greater.
There were many in the 15-19″ dbh range,
including some red maple and yellow birch
also one snag >20″ (pine) dbh and
one snapoff >20″ (hemlock) dbh 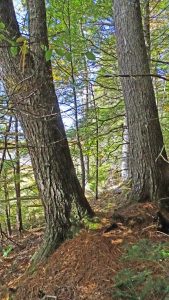 The Youtube video consists of unedited clips from my “worknote videos” as we walked a section of the dyke. 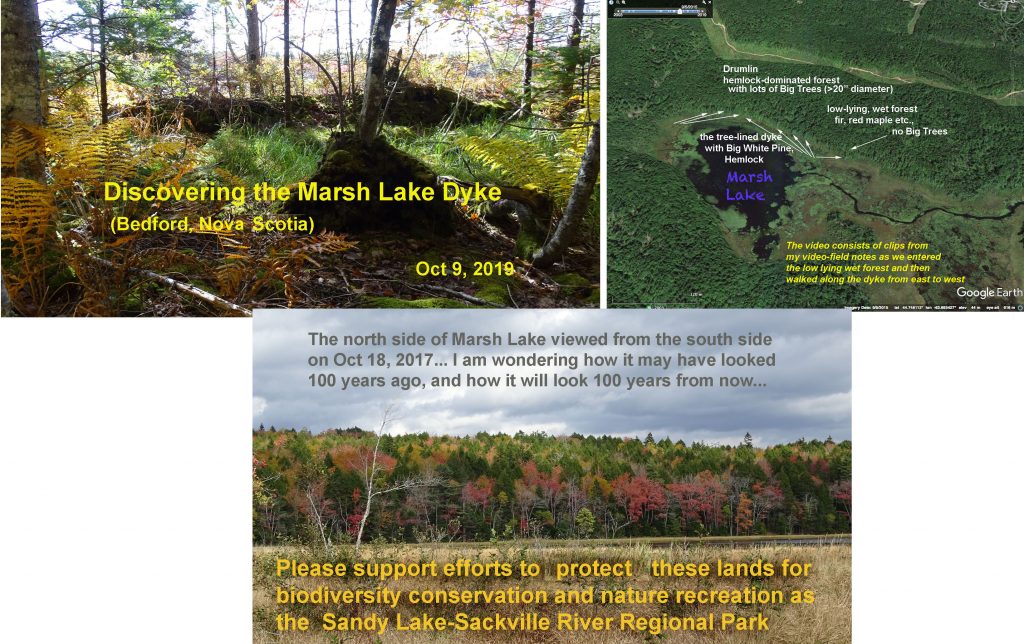 Opening (above) and closing (below) images on the Video

Derek S. wrote the following about logging in the 1950s – after the dams were removed or neglected on Marsh Lake in the mid-50s (as described above), logs were moved up Sandy Lake to a landing near Hammonds Plains Road:

When I was a kid in the early 50s my Dad and I visited a logging camp on the brook leading from Sandy to Marsh lake. It was noon and lunch was being served and we were invited to join the meal. There were about10 loggers and a cook. The logs were pike poled and peeved into Sandy Lake and corralled into booms made by a circle of logs joined with chains with iron spikes in each end. The booms were tied ashore off the beach and rowed up the lake to what was called Widdimore’s Landing near the Hammond’s Plains Road. A logging road led from the landing to the Hammond’s Plains Road. In the early 50s that landing was used by everyone building camps to load their building materials for boating to their sites along the shore.

Years later whenever Dad would take his August vacation he’d hunt for sunken hardwood birch and maple logs in the shallows near the beach where the booms had been made. There were quite a number of big logs sunken in the mud and he bought my brother and I goggles and swim fins and had us attach chains to them so they could be towed into shallow water then peeved ashore and up onto one another where we’d cross-cut saw them into chunks then Dad would split them and we’d boat them back to the camp. He was a master woodsman and believed pickled hardwood was the very best firewood. There were enough sunken trees that we had to dive around in the murky muddy weedy water every August…a smorgasbord for the big green and orange leeches!