Updated Sep 18, 2021. Many Thx to Karen R. for review, specific updates and other helpful suggestions. 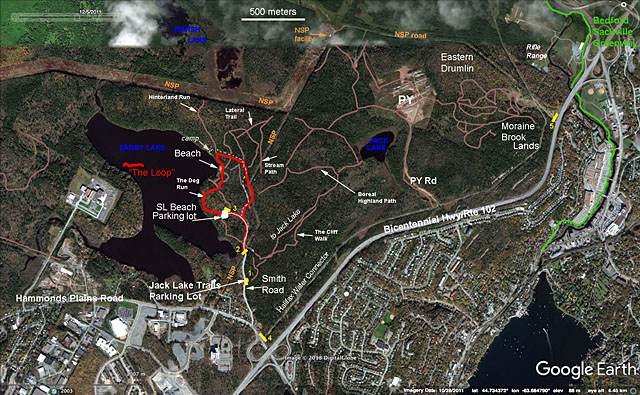 The trails (in brown) are a rough copy of trails shown at www.alltrails.com/trail/canada/nova-scotia/sandy-lake-park and are not exact. The names of trails are those cited at www.alltrails.com. Other significant features relevant to outdoor activities are identified such as the NSP power lines, used by ATVs. Yellow = Gates 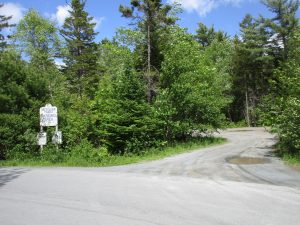 Jack Lake Trails
Approx. 300 m in on Smith Road, there is signage on the right hand side for “Jack Lake Trails” and a parking lot accommodating 10-20 vehicles (depending on how they are parked). The lot is gated, and a sign indicates the area is closed 10 pm to 5 am 7 days a week; also that it is an On-leash area. 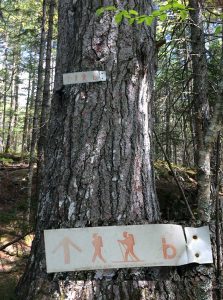 Signage on trail between Jack Lake and
Powerline, May 28, 2018.
Contributed by RW

There are a number of side trails.

Currently (September 2021), there is no signage on the main (wide) trail other than a “No Motorized Vehicles” sign, minimal signage on side trails (none on most).

The trails are used by Mountaun Bikers, walkers, bird-watchers, runners, and in winter for cross country skiing/snowshoeing. Since this is a city park, HRM By-law P-600 is in place to prevent damage to park trails and wildlife habitat. However, enforcement of this by-law has been patchy. Consequently, it is common to see large wet areas created by ATV use, with some related splintering of the trails.

Currently (September 2021),  the HRM is putting effort into reducing damage to wildlife, walking trails and habitats by posting more “No Motorized Vehicles” signs around the park and by having Halifax Police enforce By-law P-600.

Evidently there is some maintenance of the main walking trail; at least fallen trees are removed. It can be quite wet and there are several large wet areas created by ATV use, with some related splintering of the trail. I have not seen any refuse on these trails.

Close to Jack Lake, there is at least one “camp” site, some related construction, fairly well hidden from view.Such camps are not allowed within city parks, and enforcement has been an issue. 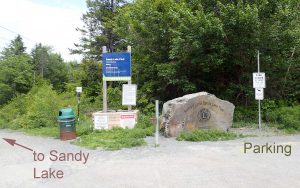 Signage for Sandy Lake Park.
The road continues to the main parking lot;
it is gated in wintertime

Another 200 m in after the Jack Lake Trails sign/parking lot, just before the power line crosses the road, there is signage for Sandy Lake Park and a small parking lot (3-4 vehicles). The road continues to a much larger parking lot, but it is gated and the gate is closed over the winter (Gate #2 on map at top).

– Dog off-leash area ONLY during October – June. Dogs must be ON-leash and under control during beach season July – September
– Warning [about thefts of goods etc]
– HRM sign: Sandy Lake Park, 115 Smiths Road, Bedford. To all users: Park hours 5 am to 10 pm; Dogs must be on leash; emergency 911, maintenance etc 311; symbols for No Smoking, Use Garbage, Dogs on Leash, No Fires, No Overnight Camping, Swimming, Picnic Tables, Hiking.
– A large monument: Bedford Lions Club, opened 2003.

The Power line crosses the road just past the small parking lot; followed to the right it is  popular for walking;;  a trail into the woods to the left is popular with dog-walkers. 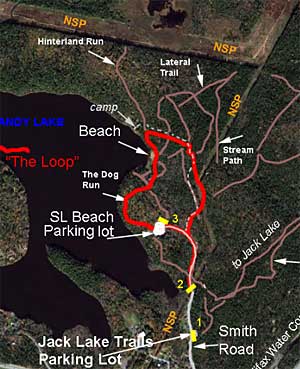 “The Loop” in red

Another 200 m down the road, there is a small parking space to the right which leads into a woods road and the beginning of “The Loop” travelling counter-clockwise. This road also leads to two very small privately owned properties by the lake. One had a derelict camp on it until the city recently had it removed. (see map).

It is approx. 250 m beyond the big parking lot, downhill, to the beach itself.

Signage at the big parking lot and at the beach repeats information about dogs. The beach area includes a large open grass area, a smaller sandy play area, changing facilities, bathrooms and a canteen type facility but not used as such recently. A sign indicates life guards are present 11 am to 5 pm July 1 to Aug 31, No Dogs on Beach, No Diving, No Alcohol.

There are trails off of the beach area as indicated roughly on the maps above, but there is no signage for the trails.

The beach is sandy, shallow for quite a way out and quite safe for kids. There is sensitive fringing wetland just to the left (south) of the beach.

People also find their own special, more secluded spots by the water along the forested edge southwest of the  beach.

There is not much launch of boats from this beach, likely because it’s a fairly long distance from the parking lot to carry heavier craft. This is desirable from an ecological perspective because of the sensitive wetland nearby. Smaller inflatables are sometimes seen. People often fish directly from the beach or partly immersed in water.

There are garbage disposal bins at the big parking lot and by the beach that I assume are serviced by HRM. The Bedford Lions Club conducts volunteer cleanups of the area. 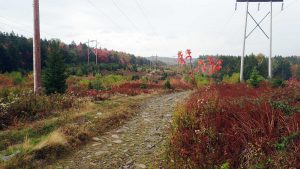 The NSP Power lines are popular walking and cycling routes. They are conveniently accessed for walking by Gate #2 on Smiths Road.

There is a hemlock-lined old logging road beside Peverill’s Brook before it enters Marsh Lake (not marked on the maps above). 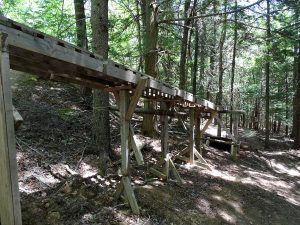 As shown on the map at the beginning (top) of this page, there is a network of trails though this area. Some are old logging roads, and some show evidence of having been frequently used by ATVs until the enforcement of low-impact activities began. Others are regularly used by Mt. bikers who have constructed jumps; others going through the rough, ridged, hemlock-dominated Moraine lands are primarily walking trails. The Mt Bike paths skirt the edge of these lands.

There is a large old sand quarry area just before the Halifax Water Connector road crosses the NSP road.

If the trail is followed to the northwest, you start climbing up the “Eastern Drumlin” which hosts mature to old growth mixed Acadian forest.

There is a lot of background noise from Hwy 102 in areas closer to that highway; it drops off quite quickly as you get away from it. 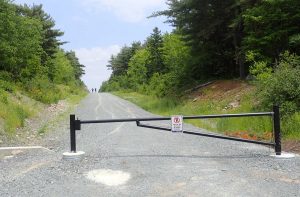 This is a wide, fully maintained, gravelled road not open to vehicle access but it is used a lot by hikers. It is located off of Hammonds Plains Road just before Smiths Road travelling west, and also connects to the NS Power Road close to the rifle range. Both the Halifax Water Road and NS Power roads are not officially part of the park. They are private roads operated by Halifax Water and NS Power. While walkers are not discouraged from using these roads, parking at these entrances is not allowed. Police will ticket vehicles or will direct drivers to the park entrance on Smiths Road.

Were it not for the fact that this road, followed towards Sackville, passes behind the rifle range (access to that area is blocked), it would be perfect as Active Transportation Route connecting Lower Sackville and Hammonds Plains Road. However, it would require only a short new path/bridge crossing to go from the Connector Road where it enters the NSP road to the Bedford-Sackville Greenway.

Various trails – not marked on the maps – lead off of the Connector Road, also the Prison Yard Road.

Prison Yard/Prison Yard Road
The “PY Road” is accessed via the Connector Road; it appears not to be maintained and is rough in spots but quite walkable. It leads to the larger “prison yard”, which is land cleared to construct a prison but was never further developed. It was scraped  down to bed rock and there has been very little natural succession to a forested state. Prominent ridges oriented NE/SW cross the area.

There are trails off of this area towards the Power lines to the West, to Jack Lake, and to the Eastern Drumlin.

My first impression of the “Prison Yard”: with little development required, it could be a great site for a summer (perhaps even winter) amphitheatre/large public events.  On further reflection & discussion I realize that such a focus could be ecologically disruptive, and ecological restoration is more appropriate. It might then be an appropriate area for summer nature camps and the like, highlighting the need to “tread lightly” and “leave no trace”.

I have not yet traversed much beyond Marsh Lake going NE or N towards the Sackville River (view Approximate Tracks). There are likely some little used, informal trails though those areas, as there are through lands to the west of Sandy Lake but not indicated on the maps above. 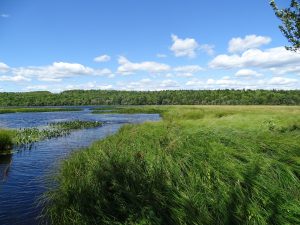 I don’t think there are any vehicle accessible, public boat launch sites on Sandy Lake. Currently, the use of power boats is quite limited, perhaps involving only 3-4 craft. This is fortunate because they can be quite disruptive of the fringing wetlands which host turtles, frogs, loon nests etc. and stir up sediments which contributes to eutrophication.

There are no roads providing vehicle access directly to Marsh Lake or Jack Lake. Once on both of these lakes, there are few signs of civilization; at Marsh lake only a power line is visible. The lake is shallow and without beaches and has extensive, meadow-like marshes. Jack lake is a small lake in a boreal-like of landscape, with narrow, marshy borders. 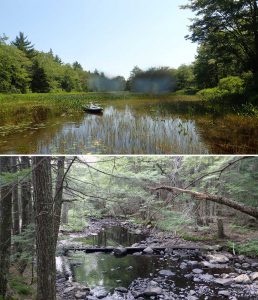 Perverill’s Brook
Above: near top of brook.
Below: digger logs on brook just before
it enters Marsh Lake