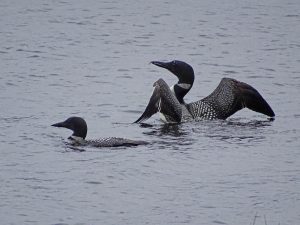 Truly a Canadian bird, the common loon breeds across most of Canada with the exception of the high Arctic, the most and southern parts of the prairie provinces, and the most heavily populated areas of the south. It is the loon most frequently seen in Nova Scotia. A common transient to Nova Scotia, the red-throated loon is often seen between mid-March and the end of April, as well as in October.

Many campers and vacationers feel disappointed if they do not have the opportunity to see a loon or hear its call. Highly vocal during the breeding season, loons have four distinct calls which they use in combination to communicate with each other. Their tremolo call sounds like a laugh and is believed to signal alarm. The yodel, a long, rising call with repetitive notes, which can last up to six seconds, is given only by the male to defend territory. The wail is perhaps the most haunting of the loon’s calls; it is used most often during social interactions with other loons. The hoot is a one-note call that is used by family members to maintain contact with each other.

We tend to think of loons as strictly fresh water birds, but they will spend part of their lives on salt water. Migrating as far south as Mexico, loons move to coastal waters for the winter. After the ice melts in spring they return to northern lakes to breed. Loons can frequently be seen along Nova Scotia’s coast during the winter months. Many of these birds will continue to live along the coast of Nova Scotia during the summer. 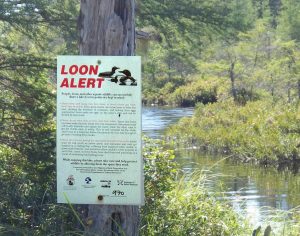 Sign posted by Hubley Big Lake – we could use a few of them at Sandy Lake!

Preferring shallow water relatively close to the shore, loons spend most of their time in or on the water, going to land only to nest. Because the loons’ legs are attached far back on the body they appear quite awkward. On land loons walk with great difficulty. In fact, they can not take off directly from land but must propel themselves along the surface of the water before taking off.

Loons are excellent divers-they can stay under water for almost a minute diving to depths of 80 m (260 ft). They can change their buoyancy by compressing their plumage and forcing air from their lungs to ride low in water or sink slowly out of sight. Under water they propel themselves by their huge, webbed feet; occasionally their wings may be used in performing turns.

Long-lived birds, loons may live from 15 up to 30 years. Both sexes look alike but the males are generally larger. Adults weigh from 2.7 to 6.3 kg (6-14 Ibs.) and measure almost a metre (3 ft.) from the tip of their bill to the tip of their outstretched feet.

Building their nests close to the water allows the birds to slip directly from the nest to the water. The same nests are often used from one year to the next. However, drastic changes in water levels could cause the nest to fail. High water can flood the nest, or very low water could make the nest inaccessible to the adults. The pair may successfully re-nest should such an event occur.

Loons are solitary nesters. Smaller lakes can support only one breeding pair, but larger lakes may have more than one pair with each pair occupying a bay or a section of the lake. Loons prefer privacy but not necessarily solitude. Loons and humans (at moderate density) can co-exist on lakes provided some undisturbed suitable shoreline or island is available for nesting.

The nests, made of coarse, decayed vegetable matter, are built on the ground. Sometimes eggs are deposited on a bare depression. Islands give protection from most predators and are the preferred nesting locations. One to three eggs are laid in June-two eggs are the most common. The olive brown eggs with irregular dark spots weigh about 160 grams (5.6 oz.). Both parents take turns incubating the eggs, usually for 26 to 31 days until hatching.

The eggs will hatch within 24 hours of each other. Chicks can swim almost right away. Their brown-black down dries quickly, and the chicks join their parents out on the lake. The chicks will often ride on the backs of their parents to rest, stay warm, and avoid predators such as gulls and snapping turtles.

Chicks are fed by their parents until they are about eight weeks of age. After this time the chicks begin to dive for some of their own food. By 1 1 to 13 weeks of age the young birds can feed themselves and are able to fly. Early in their life chicks are fed small food items including aquatic insects, small fish, and some aquatic vegetation. As they grow they are fed more fish.

Loons prefer fish for food. An adult loon will consume about 10 per cent of its body weight in fish each day. Yellow perch have been mentioned by several investigators as being the important food for common loons, along with other warm water fish such as shiners, stickleback, white perch, brown bullhead and common suckers during the breeding season.

In unproductive lakes in southwest Nova Scotia, such as those in Kejimkujik National Park, loons usually nest only on lakes greater than 40 hectares (100 acres). It is uncommon to find more than two pairs of loons on lakes of less than 80 hectares. During our studies in this region we were unable to find nonbreeding territorial adult pairs on lakes less than 25 hectares. Loons that live on smaller lakes will often fly to larger lakes to feed. On large lakes such as Kejimkujik Lake (25 kM2), it is not uncommon to see large groups of loons feeding together, right up until migration time. On some occasions groups of as many as 20 birds have been observed.

Human disturbance can be detrimental to loons in many ways. Direct physical interference with nests or young; increased wake from pleasure craft on lakes, which may swamp or destroy nests; loss of habitat caused by lakeshore development; and spills of oil and other pollutants all affect the nesting and rearing success of this beautiful bird. Yet on many lakes loons have actually adapted quite successfully to some level of disturbance by people. For example, residential development along one side of Springfield Lake, Halifax County, has not seemed to have deterred one pair from nesting or rearing their young. Loons regularly swim out in front of the homes.

By observing adults and chicks only from a distance and by not disturbing nests, you can help reduce disturbance to the birds and their young. You should never chase loons, and you should be careful with fishing tackle-abandoned or unattended fishing line may entangle and injure the birds. Boats should be used cautiously, avoiding high wakes or wash near the lake edge, and some shoreline areas should be left undisturbed to accommodate loon nests.

Last summer and this summer a volunteer loon survey program was conducted in Nova Scotia. Its purpose has been to determine how many loons there are in Nova Scotia and to pinpoint where in the province they are located. It also helps to know which lakes have loons and which ones do not. The Volunteer Loon Survey, in combination with research undertaken in Kejimkujik National Park, will establish a firm baseline of data on loon populations that we hope can be used as an indicator of environmental health.

The program depends entirely on volunteers, cottage owners, fishermen, hikers, boaters, and bird watchers. Last year over 140 Nova Scotia volunteers returned loon survey reports. Preliminary analysis of that data suggests the reproduction rate of loons (e.g., the number of young produced by territorial pairs) is lower in Nova Scotia than elsewhere in eastern Canada. We don’t know the significance of this finding as yet. There could be many reasons. We hope that the loon survey will give us the data necessary to find the answer….
———————————-
It turned out to be mercury 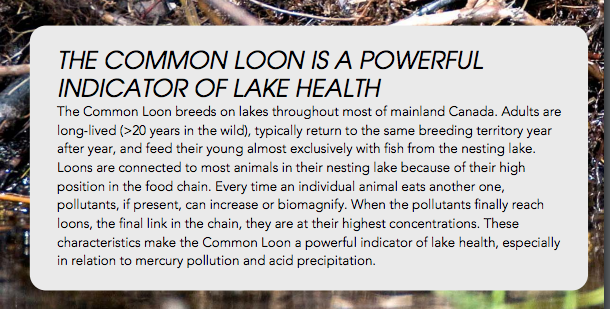 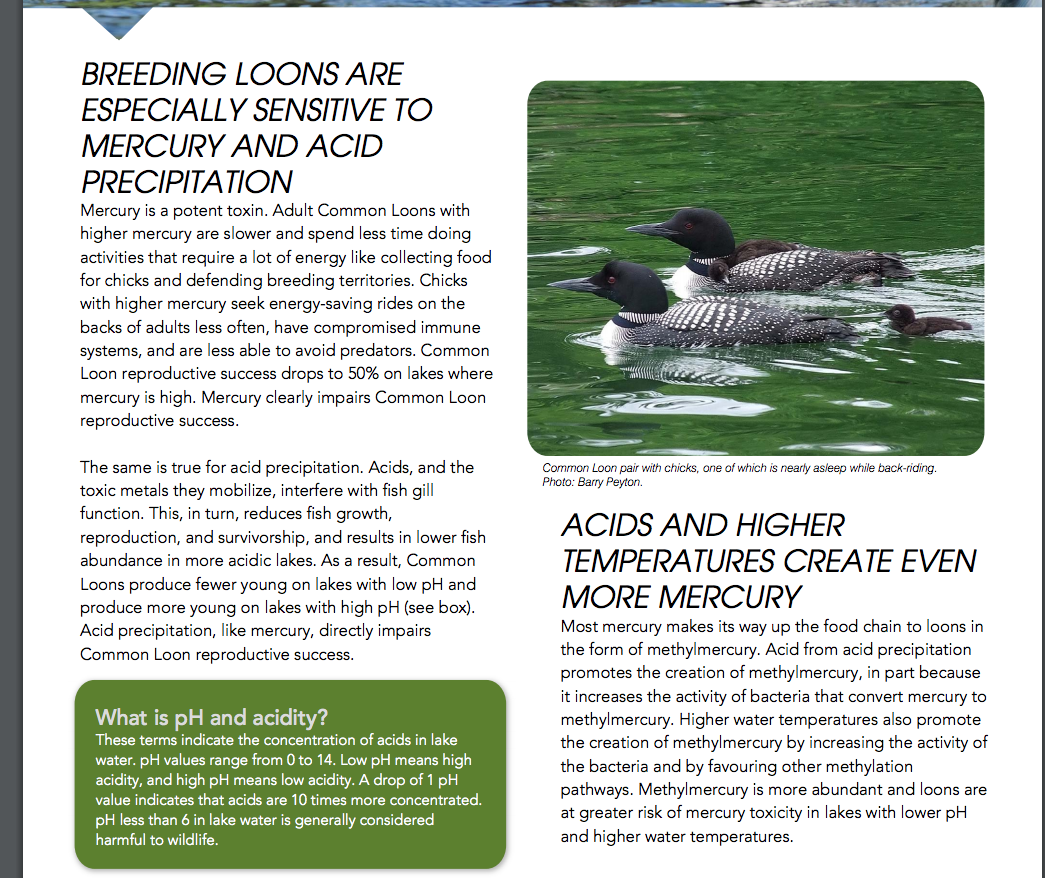 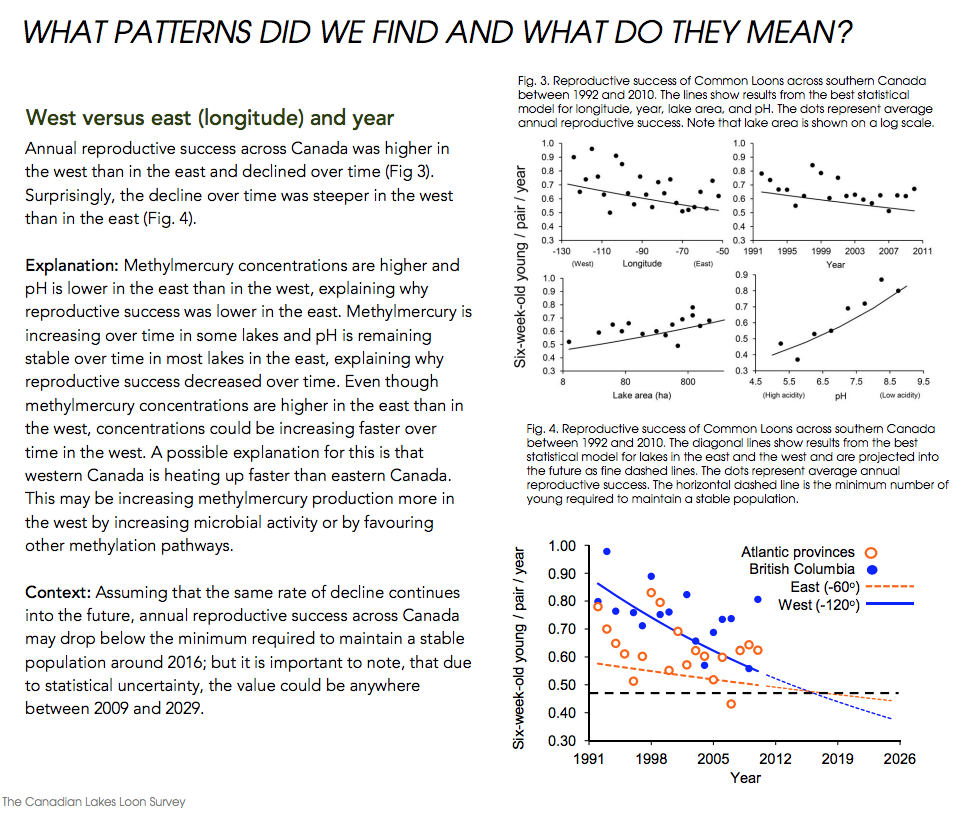 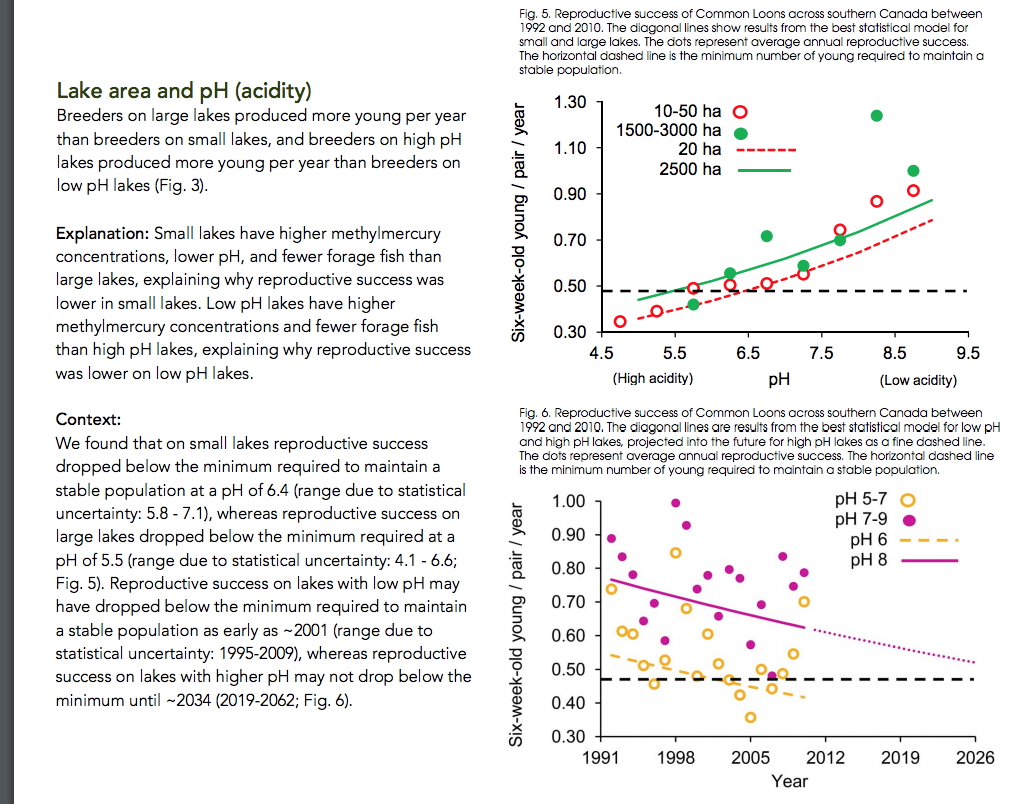 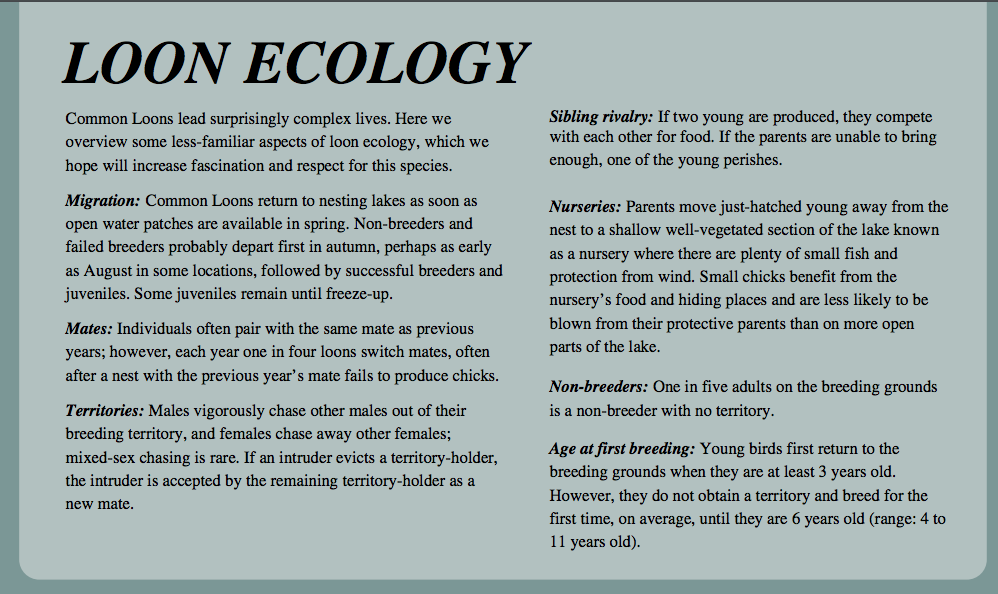 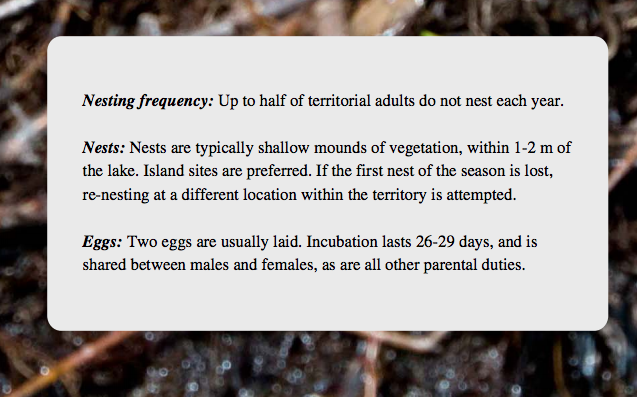