Study shows wild and hatchery trout not mixing in Nova Scotia rivers
By Angelica Haggert May 8, 2020 for www.canadiangeographic.ca/

Brook trout are the number one sportfish in the province (MacLean 2003). Approximately two million brook trout are stocked annually. The annual catch of brook trout has ranged from 800,000 to 2.2 million and declined by approximately 60 percent over the past 25 years. Current trends in catch of brook trout have indicated a decline in the trout resource. However, difficulties arise when attempting to differentiate reasons for a decline. For example, the decline in catch of trout has corresponded with a decline in license sales. Arguably, some of the decline in the catch of brook trout is related to a change in angler effort. As well, changes in fish communities via illegal introductions, global warming, and land use resulted in a reduction of available trout habitat and angling opportunity. Both overfishing and changes in habitat are believed to be the main factors in the decline of trout in Nova Scotia. The challenge is to implement the correct enhancement strategy that addresses a factor limiting production at one or more stages in the life cycle of trout.

In the fall of the year, mature brook trout will migrate to find a suitable spawning location, often in the gravel substrate of a lake or stream . Once a spawning site is selected, the female excavates a depression or ‘redd’ in which she deposits her eggs. Groundwater upwelling and spring seeps are believed to be important habitat variables in the selection of trout spawning sites. The eggs rem ain in the gravel throughout the winter until the fry emerge in spring. During this time, soil erosion that results in siltation of the trout redd can lead to high mortality of eggs and fry. As well, acid precipitation has resulted in reduced reproductive potential in some regions of the province.

After trout fry emerge from the redd, growth can vary and depending upon location and conditions.Usually, trout require about two to four years before they mature and reach a size desired by anglers; rarely, do Nova Scotia brook trout reach the age of five or six years. Brook trout face a number of challenges that can impact their survival during their relatively short life span. Competitory species, like perch and bass, predate or out compete trout for food and space. Habitat loss from poor land use can lead to a loss in the protective riparian areas that support habitat for trout, as well, climate changes lead to warm water and low flow conditions that can severely restrict summer habitat. Inspite of this situation, during the emergence of mayflies in spring, even trout populations at low density can be easily exploited. Many mainland trout populations are influenced by a number of factors or disturbances that could reduce survival and could benefit from enhancement initiatives.

Some trout fisheries may benefit from a degree of disturbance to a population. For example, populations in mainland lakes tend to grow faster than in the Cape Breton highlands. This difference is believed to be a result of the level of crowding between populations in the two regions (MacMillan and Crandlemere 2004). Trout can overpopulate habitat in regions that contain good spawning and rearing habitat, abundant cold water, suitable pH (water acidity), and low numbers of fish species. As a result, in the Highland lakes of Cape Breton many populations are crowded comprising many ‘stunted’ small individuals. Habitat conditions are much more diverse in mainland regions and, as a result, m ainland populations tend to be thinned out and growth is more rapid. The better mainland trout fisheries are probably those where competition from other species is minimal and good water quality with suitable cold water summer refugia is present.

The habitat classification system for brook trout lakes is based on depth (presence of cool water n summer), competition, water acidity, and lake size (Appendix C). The presence of competitors of trout is related to lake size. For example, approximately 33% of lakes with surface areas less than 30 hectares have low competition for brook trout, while only 8% of lakes more than 90 hectares in size have low competition for brook trout. In Maine, Bonney (2001) used white sucker as an indicator species for the presence of other brook trout competitors. The number of brook trout was 37 per hectare in lakes inhabited by white sucker and was 111 per hectare in the absence of white sucker in Maine. Competitors of trout included in the Nova Scotia classification system are white sucker, brown bullhead, white perch, and yellow perch, smallm outh bass, and chain pickerel. American eel were present throughout waterbodies of Nova Scotia and were therefore not used to classify one habitat from another. Cool water refugia in lakes can be provided by stratification and the presence of springs and groundwater seeps. The depth of stratification is variable in Nova Scotia and some dark or tea coloured lakes stratify at depths of two meters or m ore. W ell-oxygenated deep water in lakes will provide an area where trout can move to during warm periods. The presence and degree of groundwater influence in lakes has not been adequately measured to incorporate into the lake classification system. The Nova Scotia brook trout lake classification system will potentially require additional revision as more information becomes available to help define the relationship between brook trout production and habitat variables in lakes.

Popular sea run fisheries are located across the province, with the majority of the angling pressure occurring in estuaries and river mouths in the spring of the year. The number of trout in populations that m igrate to the ocean can change from year to year, depending on juvenile recruitment and environmental conditions (Ryther 1997). Sea run brook trout remain in fresh water for about two to three years before migration to salt water in the spring (MacMillan and LeBlanc 2002). The purpose of the migration is believed to satisfy a need for more food and space. Estuaries, the place where river water meets salt water, tend to be very productive and are nursery areas for smelt, flounder, gaspereau, shad, and many other species. As a result, food is plentiful and growth rates of sea trout reflect favourable conditions present in estuaries. The best sea run trout populations tend to be located in the more northern regions of the province where water temperatures are cool and geological conditions support healthy habitat. 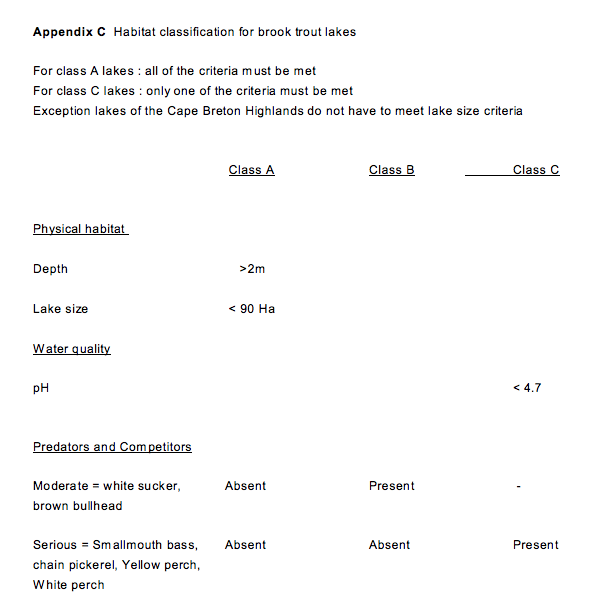