What is “Old Growth” forest?

It is hard to get a handle on old-growth forest. Not least because there is no one accepted definition of it. It depends on who is doing the defining. Many scientists adhere to the basic definition of old growth as a forest where big, old trees, both alive and dead, are the featured players. Pretty much synonymous with the term “virgin forest.”

But the writers of Beyond Old Growth prefer the broader term “older forests,” saying that it acknowledges that even forests cleared or logged over the past couple of centuries have key ecological characteristics that traditionally have defined old-growth forests” and that with proper management they can acquire the values that make what we know as old growth such a precious resource.

Walking into an old growth forest in Maine, the thing you notice is the trees are bigger, but there are fewer of them. If you hold your thumb out at arm’s length and spin in a circle you should “pick up 10 to 15 trees that appear as big or bigger than my thumb,” said Whitman.

The other thing you should see is big standing dead trees and big dead trees lying on the forest floor, trees 15 inches in diameter or bigger, in various stages of decay. “You don’t get big logs until you get big trees,” said Whitman. “You’re looking at 250 years at least before you get those structural items on the forest floor.”

The big trees should be plastered with lichens and festooned with epiphytes. Expect to see lush mosses and plants such as Coral Root and Indian Pipe. There should be liverworts and lungworts and a complex of mosses, including the Feathered Neckera, a characteristic moss of old growth forest. Below, in the spongy duff and under the many logs, you should find a variety of beetles, worms, spiders, millipedes and centipedes. You might hear pileated woodpeckers or catch a glimpse of a fisher in a tree.

One other telltale feature of an old growth forest is the forest floor itself, said Whitman and Fraver. It’s not, by any means, level. Instead it’s characterized by dips and mounds. Not coincidentally they’re more or less the size of a large tree’s root ball and its accompanying soil. This “pit and mound” topography occurs when old big trees are blown down, their roots upended. The mound is created by the exposed root ball, the hollow is where it once was. Gradually, over decades, the root rots and both the mound and pit are colonized by mosses, ferns, wildflowers and young trees.

“It could take an old field a thousand years to get that pit and mound topography,” said Whitman. “In managed forests you rarely get that, because large trees are cut before they can fall down”

Climax Species
Species which typically dominate stand composition during the late stages of natural succession. These are usually the longest lived and most shade tolerant species characteristic of the climatic and site conditions within an ecosystem. On zonal Acadian Forest ecotypes they include Hemlock, Red Spruce, White Pine, Sugar Maple, Yellow Birch and American Beech; while on Maritime Boreal ecotypes and edaphically limited sites (e.g. bogs, fens, highlands, coastal) Balsam Fir, Red Maple and Black Spruce are more likely to form the climax forest. An indication of climax types can be obtained from the ecosection mapping of the Ecological Land Classification for Nova Scotia (Neily et.al., 2003), as well as from the site based Forest Ecosystem Classification of Nova Scotia (Report DNR 2011), and Forest Ecotypes of Nova Scotia (Report DNR 2011).

Mature Climax
A forest stand where 30% or more of the oldest basal area is in trees 80 – 125 years old, at least half of the basal area is composed of climax species, and total crown closure is a minimum of 30%.

Old Growth
A forest stand where 30% or more of the basal area is in trees 125 years or older, at least half of the basal area is composed of climax species, and total crown closure is a minimum of 30%.
Old growth forests are dynamic and represent the shifting mosaic phase of forest development, marked by mature canopy processes of gap formation and recruitment from a developed understory. Typical characteristics include a patchy, multi-layered, multi-species canopy with trees of several age classes dominated by large overstory trees, occasional dead topped stag trees and decadent wolf trees, and the presence of snags and fallen woody debris. Ideally this stage represents a long period of ecological continuity. 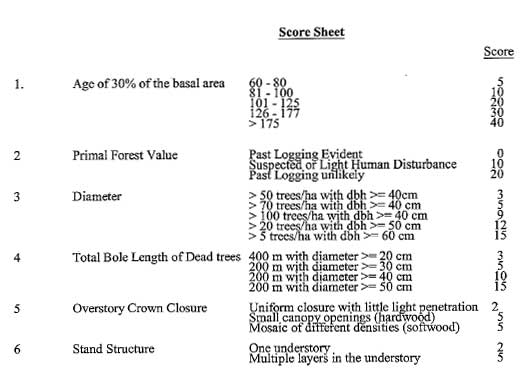