Wetland Inventory for area southwest of Sandy Lake. The base map is from a screenshot of the wetland layer in the PLV (Provincial Landscape Viewer). Streams (“WAM Predicted Flows”) feeding Sandy Lake are highlighted. The names “HP South Brook” and “Western Brook” are my identifiers for these streams. Johnson’s Brook is also known as “Bob’s Brook”.   Coloured polygons are wetlands with vegetation as indicated by the key at top right. The areas in hectares are given at bottom right;  those values are revealed when you click on the polygon in the PLV. NIA1,2 and 3 are  “No Information Available” polygons; no values are given for the areas of the NIA polygons, the values  above are my approximate estimates.

Two of the larger wetlands and one smaller one   are not listed as wetlands on the PLV map above; likewise, they are absent from maps illustrating the locations of wetlands in the AECOM Report (see AECOM Fig 1 and AECOM Fig 3 on this Maps page. )

I have viewed the NIA2 wetland from a distance, and tromped through NIE1. I have not seen the smaller NIA3. NIA1 and NIA2 are clearly wetlands. 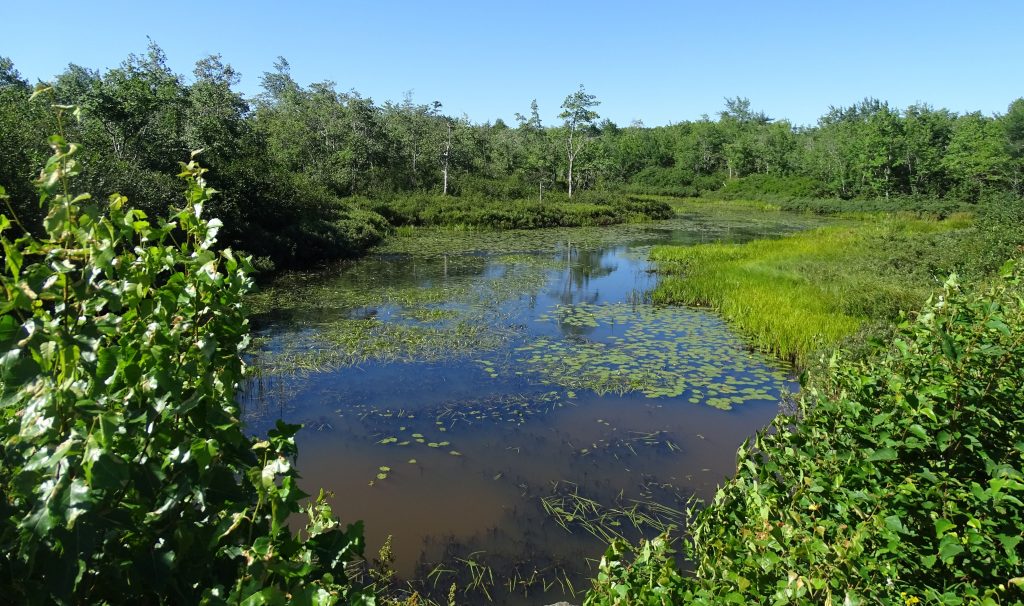 View over a portion of NIA2.  Photo taken from service road looking south in the area of Murphy’s pit. View location on Google Maps. Several streams converge in this area; open water is bordered by marshes and some of the forest is likely floodplain forest. Photo Aug 20, 2020. This area is important habitat and local migration corridor for snapping turtles. 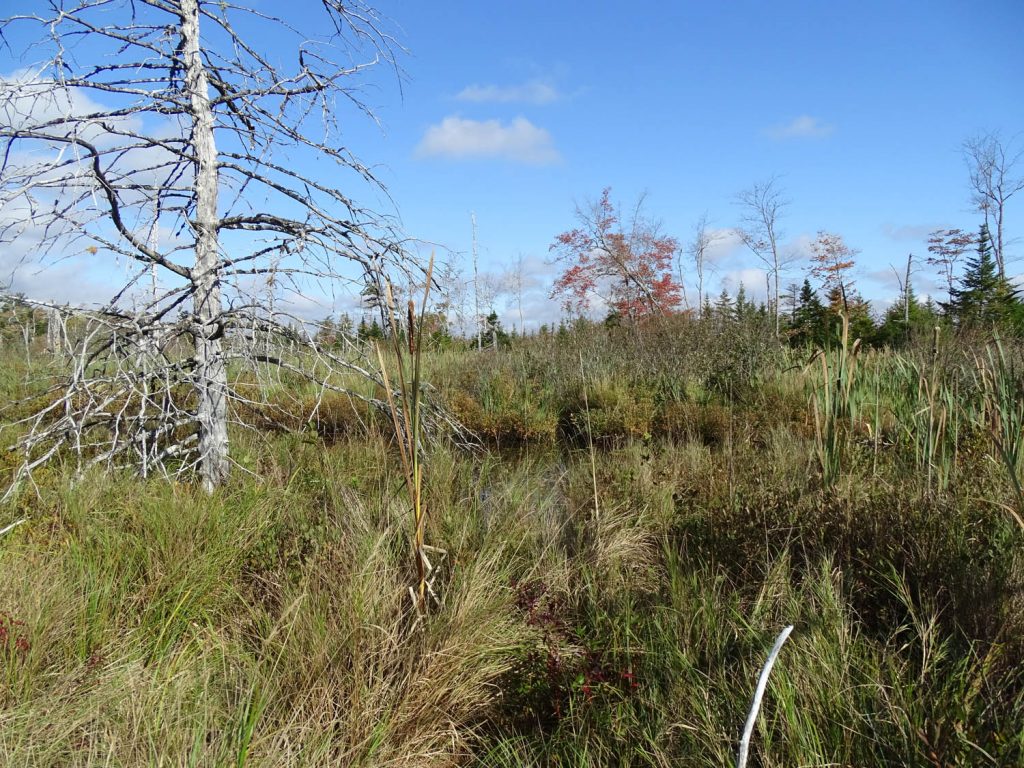 View of NIE1 close to its center.  View towards the north. Open watercourse just ahead. Vegetation predominantly sedges, grasses and cattail; and alder further back (south). Photo on Oct 2, 2020. View  Location in Google Maps

NIA1 is a particularly impressive wetland. View this Photo Album for many photos with  Google Map locations and several videos.   On Oct 2, 2020, I followed or tried to follow the HP South Brook as it flows into this wetland. Just above Hammonds Plains Road it goes through a floodplain forest. At one point it splits,  one branch continuing as a distinct stream towards the north or north east, the other branch heading northwest and splintering  as it meanders though the wetland, the water eventually flowing into the Western Brook. It’s very wet – at several places I suddenly sunk up to my waist. So NIA1 stores a lot of water and a lot of water flows through it. In the AECOM Report, Fig 7 (View on Maps Page) the area is identified as an area of maximum groundwater recharge; there is elevated land just to the west of it.

The full extent of the wetland is revealed (or suggested – a proper wetland delineation is required to determine the precise area) in this April 2020 Google Earth Image: 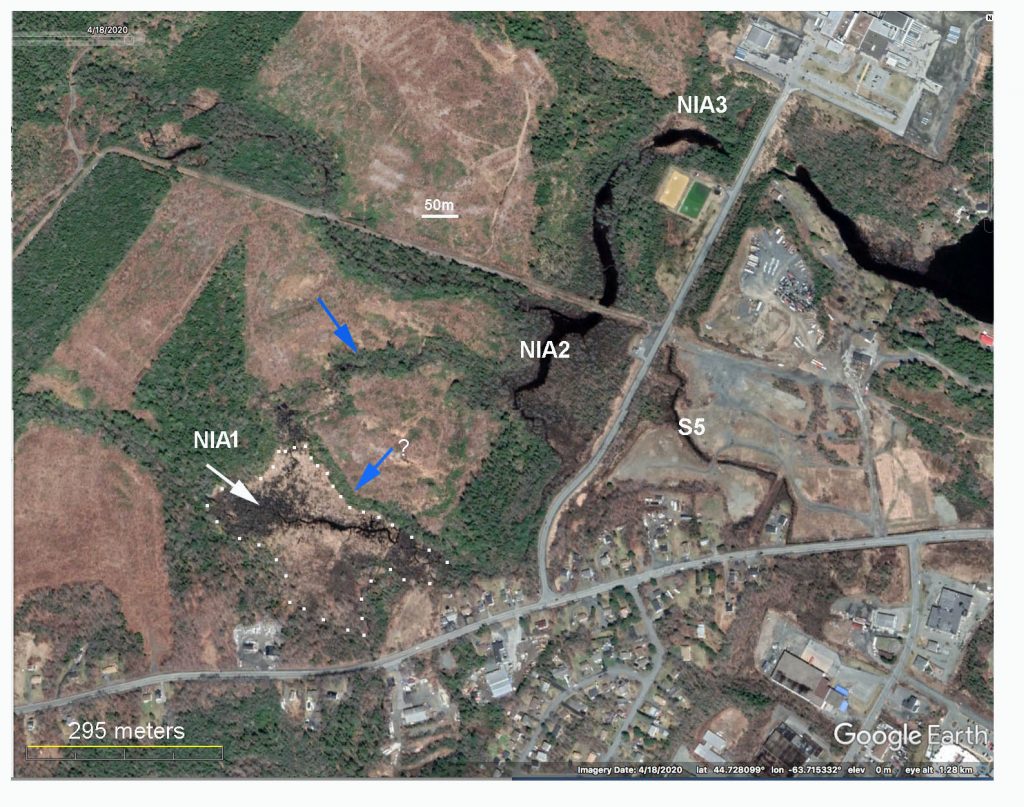 Google Earth Image for April 18, 2020 showing NIA wetlands and the one recognized wetland, S5.  Blue arrows point to two forested riparian areas that were not cut when surrounding lands were clearcut in 2013 – by regulation 20 meter buffers must be retained around watercourses. These particular watercourses are NOT shown on the PLV  or in the AECOM 2014 Report. Wetland S5 appears to be highly degraded. NIA1 as outlined is roughly 5 ha in area.

This image (above) underscores the limitations of relying solely on the Nova Scotia Wetland Inventory when desktop studies such as the AECOM Report are conducted. The only recognized wetland in the area is S5, which has been highly degraded, while NIA1 and NIA2 which are clearly significant wetlands, are not cited in the key to wetlands. As well,  two stream corridors (the blue arrows), do not show up on the PLV (Provincial Landscape Viewer) and likewise are not identified in the AECOM Report. (Both NAI1 and NAI2  and one of the two blue-arrowed forested riparian areas are, however, identified as lying within  the mappings of “Type 1 Constraints” in AECOM Map 7.)