Woody debris washed down from the 2013 clearcut via Karen’s Brook forms a fan of  dark woody surficial deposit on the lake bottom extending outwards from the mouth of the brook and may have led to some shallowing/increased growth of emergent aquatics in the shallows by  “the Beach” at the northwest corner of the lake.  These  deposits are now mineralizing and adding to the nutrient load on Sandy Lake and downstream.  As Johnson’s Brook also crosses the clearcuts, it seems likely that there were flows of woody debris from the clearcut into the southern inlet as well.

Karen’s Brook (also referred to as “NW Brook”) enters Sandy Lake at its northwest corner, and not far from the outlet to Peverill’s Brook; Conrad et al. 2002 referred to the inlet as the “Northern Inlet”, one the two major inlets to Sandy Lake and the one  carrying the lesser amount of water: 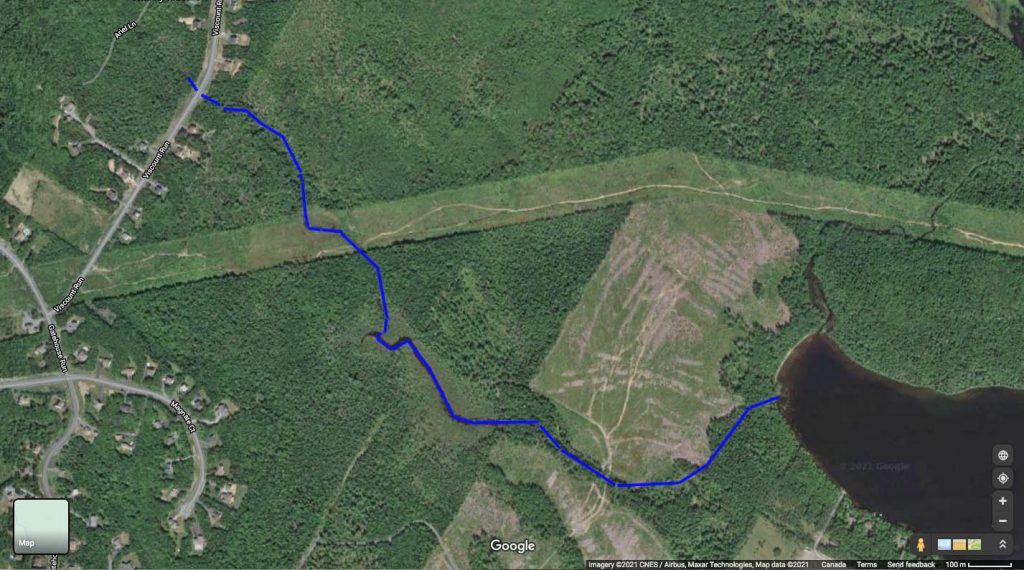 There is low density settlement at the upper reaches of Karen’s Brook which also lie at the edge of acid slates (bedrock with acid-generating potential). Conrod et al.,2002 recorded a pH of 3.38 in the brook which they attributed to these acid slates. It’s likely that strongly acidic water is generated only when there is severe disturbance of the bedrock, so it may have been related to disturbances associated with construction/road building. I observed a pH value of 5.7 at the Northern Inlet on Aug 21, 2017.

Karen’s Brook crosses the area that was clearcut in 2017, and when I walked that area on June 21, 2017, I noted  a significant break in the treed riparian where logging vehicles had crossed Karens’s Brook:

The route can be clearly seen on the Google Map image above (Img 1).

So it was not surprising later on to observe  fans of woody debris around the mouth of Karen’s Brook on Sandy Lake. 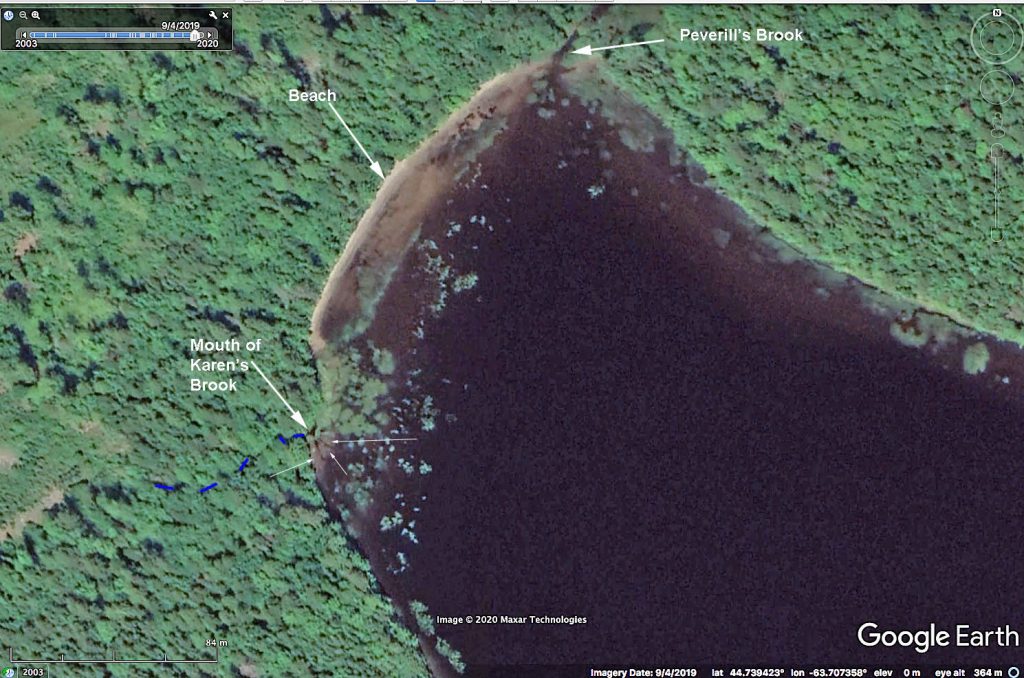 Img 4: Google Earth image  of the northwest corner of Sandy Lake Sep 4, 2019. Small arrows point to fans of woody debris washed down Karen’s Brook from clearcut area. The long stretch of light coloured sand labelled “Beach”  was reportedly  once a popular beach with local residents (cottages, camps)  but since the 2013 clearcut, the water  there are many more marsh plants bordering the beach.

Wood chips typically “immobilize” nitrate- and ammonia-nitrogen   when they start decomposing, but after about 2 years begin to “mineralize” (release) nitrogen1. The high EC value for the exposed debris compared to water flowing over it and to open lake water suggests it was likely mineralizing nitrogen rather than immobilizing it2  at this stage, which was 4 years after the clearcut. Other nutrients in the chips would also be released along with the nitrogen. Another possibility: the high concentration of organic matter is creating anaerobic conditions and  release of  phosphorus 3; possibly both processes are occurring. Either way, it’s likely that the woody debris is adding to the nutrient load on Sandy Lake, as well as to oxygen consumption.

Because this inlet is fairly close to the outlet from Sandy Lake, the impact on the larger lake may not be as large as it would be were the debris coming in the south (main) inlet. However,  it’s likely that a lot of wood debris also entered the lake via the southern inlet as Johnson’s Brook likewise crosses the clearcut.
________
1. Nitrogen immobilization by wood-chip application: Protecting water quality in a northern hardwood forest P.M. Homyak et al., 2008. Forest Ecology and Management 255:2589-2601
2. On-farm measurements of pH, electrical conductivity and nitrate in soil extracts for monitoring coupling and decoupling of nutrient cycles. DG Patriquin et al., 1994 Biological Agriculture and Horticulture 9: 231-272.
3. Internal phosphorus loading in Canadian fresh waters: a critical review and data analysis
Authors: Diane M. Orihel* et al., 2017. Canadian Journal of Fisheries and Aquatic Sciences 74: 2005-2029

Looking across the lake from Karen’s Brook area (Img 7 above),
& walking from shore straight ahead (as in pic), these observations were recorded

So the woody debris extends more than 40 m from shore here.

The intrusion of this material may have led to some shallowing and increased growth of emergent aquatic plants in the shallows extending outward from “the Beach” (see Img 2 above) to the north of the inlet. 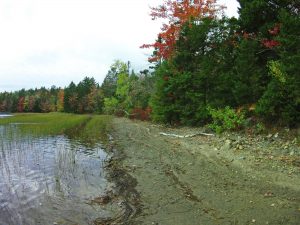 A local resident says there was very little marsh in front of the beach  10 years ago.

Comparison of Goggle Earth Images for different years, below   is suggestive of considerably more emergent aquatic plant growth in front of “the beach” in 2019 compared to 2015, 2010, 2014: