In an effort to identify the major sources of high EC (high salt) water entering Sandy Lake via the SW Inlet, on Nov 8, 2018 I took water samples from streams flowing into Murphy’s Pit (Sites 1,2, and 3-4) and from Murphy’s Pit water just north of the service road (Sites 5,6) – the streams converge  upstream from the Service Road), also just below the culvert where the water enters Sandy Lake Site 7); and for reference I took a sample of lake water by Sandy Lake Beach Park (Site 8), and from a stream flowing into Sandy Lake by Sandy Lake Beach Park (Site 9). They were analyzed on-site using pocket probes.

Above: EC and pH values for streams associated with Johnson’s (Bob’s) Brook on Nov 8, 2018. #1  Upper Johnson’s Brook. #2 Brook receiving drainage from Uplands Park wastewater treatment area, also from streams south of Hammonds Plains Road. #3 and # 4: Brook draining construction/trucking yard and community just to the SE of the Dairy Road. These 3 system converge in the area of sites 5& 6 and then water flows downstream to enter Sandy Lake through two large culverts at site #7. Nos 8 and 9 were taken at Sandy Lake Beach Park for reference. There were strong flows in the brooks at sites 1 and 2. A steady but weaker flow was observed at site 3-4 (it crosses the road from 3 to 4 through a culvert and that water was very cloudy and had a lot of suspended material.

Three streams converge at “Murphy’s Pit” (see Map page 3 in Thompson 2001). I estimated the volume of flow in Upper Johnson’s Brook (#1 in map above) to be 3 x that in the stream draining the Uplands Park wastewater treatment area/watershed south of Hammonds Plians Road, and at least 30 times that draining the construction/trucking yard and community just to the SE of the Dairy Road. Upper Johnson’s Brook had a very low EC value, while those of the other two brooks were elevated (125 uS/cm for #2, 410 uS.cm for #3/4); those streams are major sources of pollutants going into Sandy Lake. 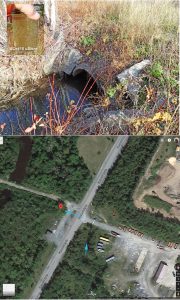 I repeated the set of observations described above on Dec 13, 2018: 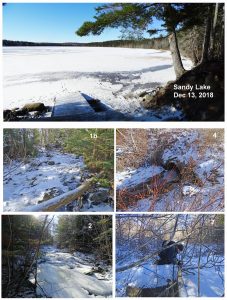 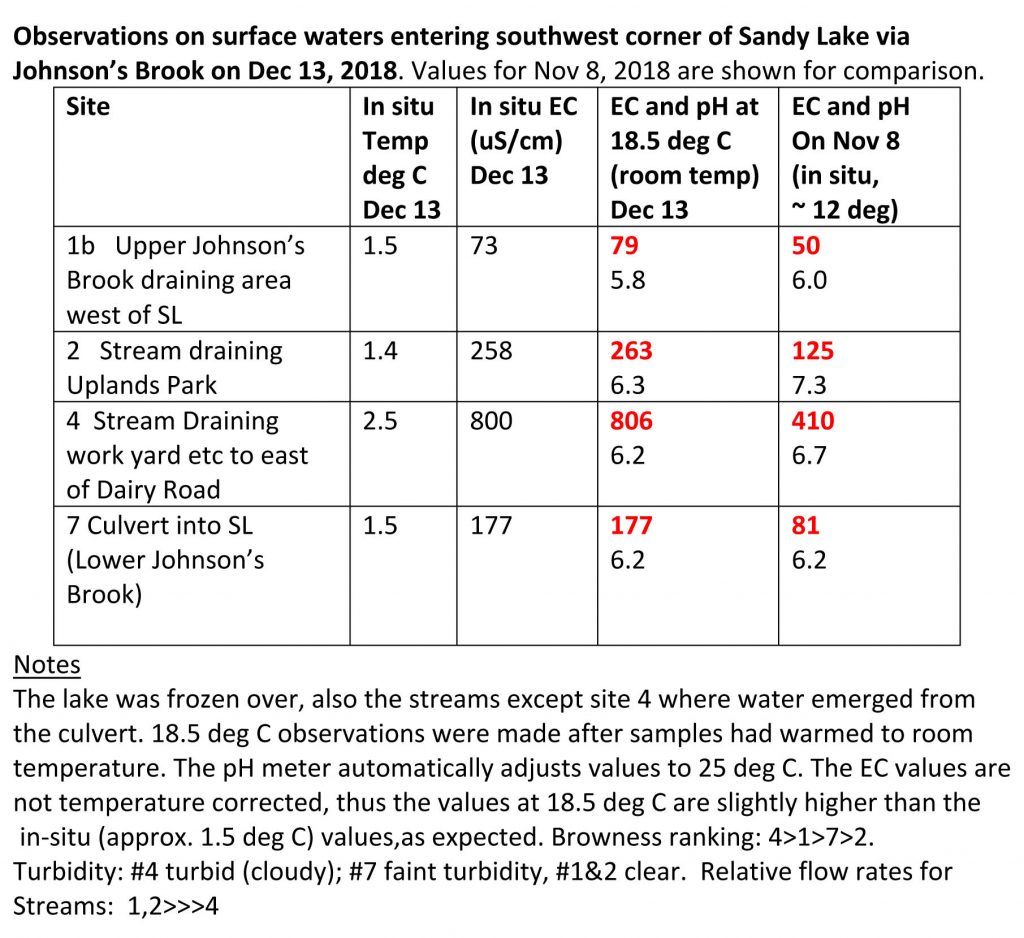 Peak salt input to the lake could probably be expected to occur when temperature starts to rise in the spring, the lake to melt and the surrounding lands to thaw, especially if there has been a lot of salting over the winter. It’s then that the incoming water could get very briny (e.g. EC 1000 uS/cm and above), and move in a layer to the bottom of the lake.