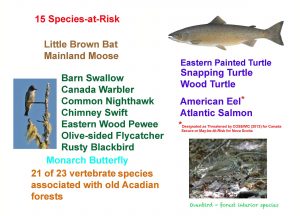 Amongst the reasons to protect Sandy Lake & Environs

The NWCF Report updates and consolidates our knowledge of the status of the avian species in “Sandy Lake & Environs” – which encompasses the area of the proposed “Sandy Lake-Sackville River Regional Park” (SR-SRRP) –  and of six non-avian, animal species-at-risk. A few stats on the birds drawn from the Report:

Species-At-Risk (SAR) are listed federally and/or provincially (NS) for protection; Species of Concern (or “Special Concern”) are native species for which there are some concerns (e.g., declining populations), but the the information required to list them as Species-at-Risk is insufficient or not yet available or has not been processed.

The Report provides much more documentation than these summary stats, e.g.,  it describes 11 habitats and provides notes on the occurrence and habits of each species in those habitats. A summary table is available here.

The high diversity of birds and the presence of so many Species of Concern and Species at Risk in the SL-SRRP can be attributed to
– the diversity of habitats
– the relatively large size of intact habitat
– the prominence of  wetlands and old forest with many patches of Old Growth
– the proximity to the coast (and hence first arrival of migrating birds in the spring, and a last stop-over for those birds in the fall)
– the location within an urban core area, in effect it is an oasis within the urban core. 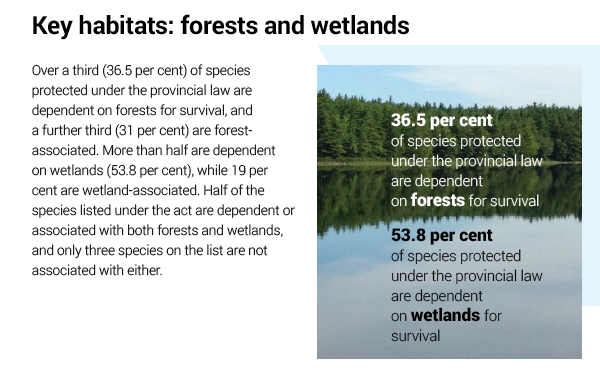 The NWCF Report also documents the presence of 6 non-avian Species-At-Risk in the SL-SRRP, these being the 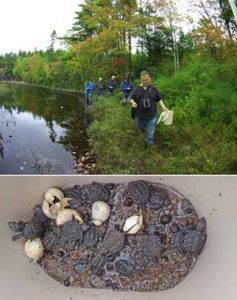 The Sandy Lake watershed is especially critical to efforts by the Sackville Rivers Association to bring back salmon populations. American Eel is considered threatened for Canada as a whole; its status in NS remains unclear  (NS Department of Fisheries & Aquaculture official, personal communication).

So in total, there are 15 Species-At-Risk* in the proposed SL-SRRP! Is there any other equivalent area in HRM?
*Arguably 14; 14 if American eel is not counted, 15 if it is

The NWCF report documents some of the many species using two major wildlife corridors within the SL-SRRP – the Sackville River Valley Wildlife Corridor and the Sandy Lake Wildlife Corridor, the latter lying in lands west of Sandy lake that could be developed. About this latter corridor:

Squeezed between Sandy Lake and the regen sites there is a green belt that is part of an area that plays a very important role as part of the Sandy Lake Wildlife Corridor. (See Map 2: Wildlife Corridors.) This major wildlife corridor has an average width of 1000 meters and is well travelled by a wide variety of wildlife including the Endangered Mainland Moose. This corridor is also used regularly by Black Bears and other large mammals and has a large healthy population of midsized and small mammals such as Bobcats, Red Fox, Woodchucks, and Snowshoe Hares. This wildlife corridor is a major influence on what species survive within the park and how the park enhances and influences areas well outside the proposed park’s boundaries. This corridor is one of two highly important Major Wildlife Corridors that are identified as being crucial to wildlife health and diversity within the proposed park.

The NWCF report also documents local use of 10 smaller corridors of more local significance, seven of which occur on lands that are under development pressure; six of those are riparian habitats around streams entering Sandy Lake (#3,4,5,6 in the top map above) or Marsh Lake (#7,8) and are also within the lands that could be developed. One of them was observed to be an important route of movement of the common snapping turtle (a Threatened Species for NS) to and from Sandy Lake, and it was suspected that other of these local corridors are also important for snapping turtle. They are also vital habit for many other species.

The riparian habitats running through the regens contain many species that often use the regens for feeding purposes. The conjunction of these two habitats currently represent the highest bird densities found in the proposed park area and is the best location in the park for viewing the often-elusive Winter Wren – NWCF Report.

Some of the Riparian Forest retained within the 2013 clearcut.
It includes trees more than 100 years old

IN BRIEF: FOUR MAJOR REASONS TO PROTECT LANDS ON THE WEST SIDE OF SANDY LAKE

In brief, there are four major features of these lands that require protection:

1. Most of the surface water flow into Sandy Lake is on the west side of the lake. Development within that area would likely result in some diversion and hence reduction of water flow into Sandy Lake;  hard surfaces would increase rapidity of runoff and the flood hazard in the lower Sackville River;  and water quality and potentially, seasonal overturning of the lake (essential for oxygenation of deeper waters would be reduced because of loss of natural filtering and increased salt loading. 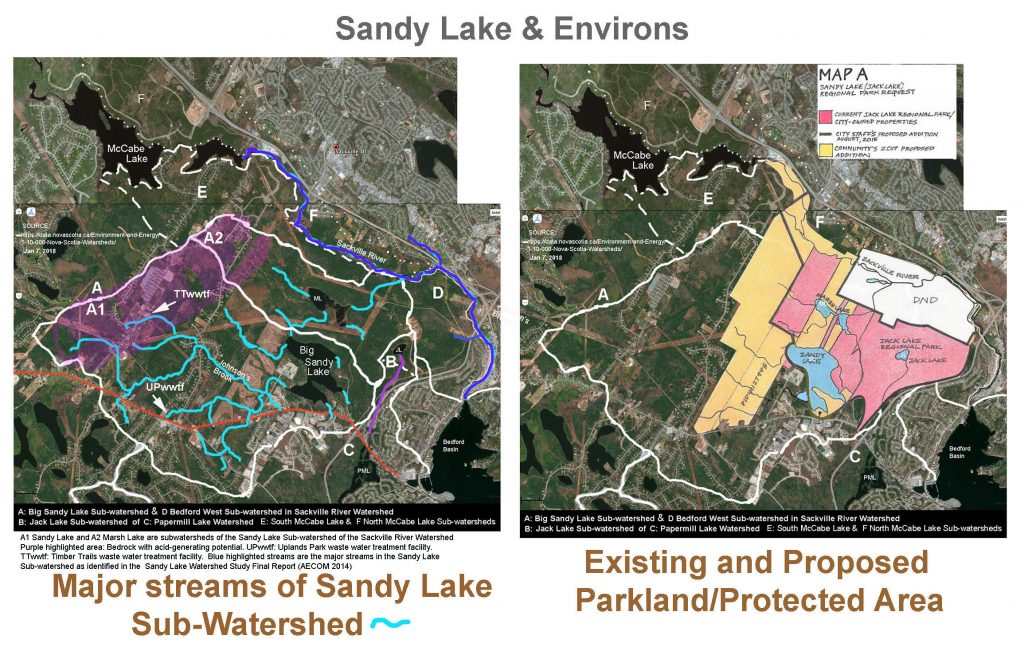 View more about these topics under Lakes.

2.  The trophic status of Sandy Lake is already precarious, and a bloom occurred last summer;  it will take very little to push it over the top when really we should be walking it back to its once oligotrophic status (now mid-mesotrophic).

3.  Even with the clearcut of a large swath on the west side of Sandy Lake, the area still contains important habitat. From the NWCF Report:

p3: The woodlands that include the western half of Sandy Lake have been more heavily impacted by man and contain a number of human features, including homes, businesses, and clearcuts.

Surprisingly this area continues to have a fairly good diversity of wildlife due in part to the shoreline remaining largely wooded, private lots maintaining most of their tree cover and the fact that the remainder of the lake is bordered by undeveloped wildlife rich woodlands.

p3:The southwestern portion of the proposed park has been heavily impacted by a series of clearcuts and the Kingswood North residential development. However, these clearcuts are regenerating nicely and are further enhanced by a riparian habitat containing many large trees. These trees are representative of the forest that existed there before the cutting and are aiding in the recovery and recolonization of the area by wildlife.

p9 Regenerating Forest Areas
In 2013 a 2.4 km stretch of forest was clearcut just west of Sandy Lake. The cutting process left behind five strips of forests containing many large trees. These strips were left uncut as they bordered brooks and streams.

These clearcuts are regenerating nicely and are further enhanced by the riparian habitat which is representative of the forest that existed there before the cutting, and are aiding in the recovery and recolonization of the area by wildlife. These regeneration forest areas are also simply referred to in this report as regens…. 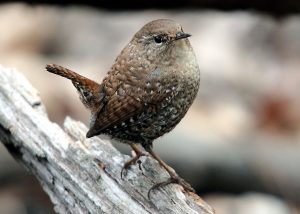 The riparian habitats running through the regens contain many species that often use the regens for feeding purposes. The conjunction of these two habitats currently represent the highest bird densities found in the proposed park area and is the best location in the park for viewing the often-elusive Winter Wren.

p13: 2. JOHNSTON’S BROOK
Johnston’s Brook flows into the southwest corner of Sandy Lake. It crosses underneath the lane into the Agropur Cooperative Dairy Bedford Plant then splits into two forks. The Northern Fork crosses Gatehouse Run and is being fed by two wetlands, one wetland lying between Lucasville Road and Hammonds Plains Road, and a second wetland lying between Gatehouse Run and Lucasville Road. In addition is it also connected to a series of small ponds along Voyager Way on the south side of Hammonds Plains Road. The Southern Fork winds its way through low lying areas located along the Farmers Dairy Road and skirts a drumlin before crossing over the Hammonds Plains Road. Snapping Turtles were found travelling along the entire length of these forks with unsuccessful breeding attempts at several locals. 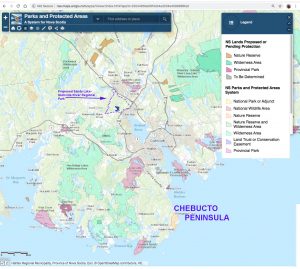 The Chebucto Peninsula, a significant conservation area. Location of the proposed SLSRRP is shown, just above the neck of the peninsula

4. The area provides important Wildlife Connectivity, regional and local as described above. Already connectivity of the Chebucto Peninsula, an important conservation area, to the greater mainland is highly restricted, as recognized in the Halifax Green Network Plan (HGNP).

The Chebucto Peninsula is one of the Regions most important and vulnerable natural areas. Its large undisturbed patches of wilderness, broken only by the Highway 333 loop and Highways 306 and 253, provide regionally important habitats for a wide variety of species, from endangered moose populations to rare plants. While the bulk of the interior of the Peninsula is well preserved, protected by parks and wilderness areas, ribbon development along the major highways is a concern for both local and regional landscape connectivity.

The Chebucto Peninsula is largely disconnected from the mainland by Highway 103 and the associated expansion of both urban and rural settlements. This development has created a barrier to wildlife movement. The planned development of Highway 113, together with the multiple areas planned for future urban development, may eliminate the few remaining natural corridors between the peninsula and the mainland. If concerted efforts are not undertaken to mitigate and avoid impacts to landscape connectivity, the functioning of the Chebucto Peninsula for wildlife and overall ecological health will be severely compromised.