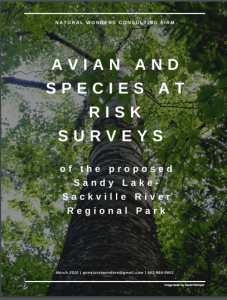 The author is Clarence Stevens, a highly experienced, professional naturalist. View This Video to see, hear Clarence talk about the natural history in the area of the Sackville Greenway Trail

In 2017 avian surveys were commissioned by the Sandy Lake Conservation Association for the purpose of augmenting their baseline data and to acquire additional information on the current status of bird species within the proposed Sandy Lake Park.

Initial surveys were conducted during the 2017 breeding season with additional breeding surveys and year-round data gathered in 2018 and 2019. The followup surveys also placed special emphasis on gathering data on any avian or non-avian Species At Risk that might be living within the proposed park boundaries. 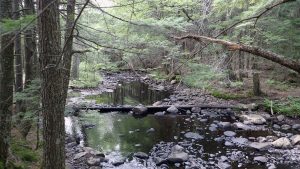 Peverill’s brook close to where it flows into Marsh Lake.

Survey preparation work began by traveling all roads bordering the proposed park for the purpose of identifying pubic access points into the project area. Access Points used included those trail heads associated with Jack Lake and Sandy Lake off of Smiths Road, as well as trails entering the proposed park area from Gatehouse Run, Viscount Run and Savoy in Kingswood North. Surveys were not just limited to well established trails but involved travelling the shorelines of each of the water bodies present, which included all but some of the small privately owned shore line properties of Sandy Lake, all of Jack Lake and all of Marsh Lake and its surrounding wetlands.

For the purpose of the surveys we also gained permission to use private access points available through the Agropur Cooperative Dairy property. Game trails were also traveled whenever they were encountered. 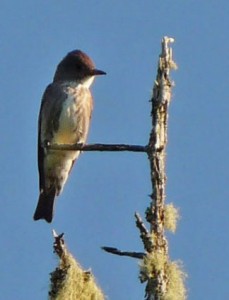 Surveys conducted on the proposed park lands during the 2017 to 2019 breeding seasons detected 21 species of interest to Federal and Provincial conservation bodies.

Species at Risk living within the proposed park boundaries include:

– 117 avian species; 99 breed in the proposed SL-SRRP
– 7 Species-At-Risk; 8 additional are Species Of Interest