Tales of Gaspereau and Loons in Sandy Lake 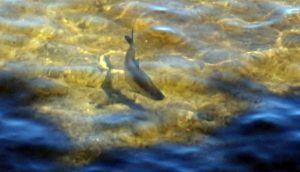 I recently received this story from a Sandy Lake enthusiast…

“Yesterday at the lake I was sitting by the shore looking around when two big loons hunting along the ledge pulled up right in front of me about 12′ away. There were lots of gaspereau swirling up and down the shoreline and the loons moved slowly along about 4′ apart with their heads down scanning the top of the ledge. Suddenly one dove and I could see it swirling back and forth at speed near the surface and emerging while trying to swallow whatever it caught. I didn’t see the fish but the loon’s neck was distended somewhat. His (her) partner stopped while the other one finished swallowing and then they started hunting again.

“Some years back I saw a gaspereau shooting straight to shore from about 20′ out. It’s body was almost completely out of the water with only its tail in and that tail was going like an eggbeater. Immediately behind it were two loons moving just below the surface at flank speed like torpedos—a mound of water above each as they sprinted after the gaspereau dashing for shore. Suddenly one loon went into warp speed and shot up plucking the poor gaspereau almost out of the air just as it was reaching shallow water. The two loons immediately surfaced and the successful hunter swallowed the hapless fish. Quite dramatic to see—like a BBC wildlife clip.”

Signs of a healthy lake… let’s ensure it stays that way!

PS: We are pretty lucky to have Gaspereau in Sandy Lake – a 4 million dollar fish ladder was built on the Indian River (in St. margaret’s Bay Watershed) to another Sandy Lake to facilitate it’s return to that system – view Gaspereau begin comeback after $4M fish ladder installed by Cassie Williams for CBC News, May 25, 2016

This entry was posted in Sandy Lake. Bookmark the permalink.