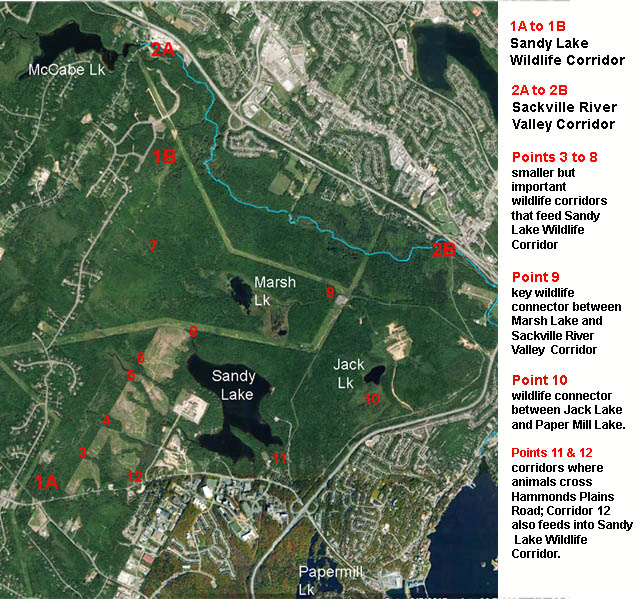 Establishment of the proposed park would protect two major wildlife corridors, including one identified in the Halifax Green Network Plan as vital to wildlife movement on and off the Chebucto Peninsula, which is a major conservation area.

Establishment of the proposed park boundaries would protect the Sandy Lake Wildlife Corridor which is a major connector for wildlife to the Blue Mountain-Birch Cove Lake Wilderness Area. Protection of this corridor would enhance the survival of species found in both parks as well as protect the biodiversity of these two areas.

Squeezed between Sandy Lake and the regen sites there is a green belt that is part of an area that plays a very important role as part of the Sandy Lake Wildlife Corridor. (See Map 2: Wildlife Corridors.) This major wildlife corridor has an average width of 1000 meters and is well travelled by a wide variety of wildlife including the Endangered Mainland Moose. This corridor is also used regularly by Black Bears and other large mammals and has a large healthy population of midsized and small mammals such as Bobcats, Red Fox, Woodchucks, and Snowshoe Hares. This wildlife corridor is a major influence on what species survive within the park and how the park enhances and influence areas well outside the proposed park’s boundaries. This corridor is one of two highly important Major Wildlife Corridors that were identified are being crucial to wildlife health and diversity within the proposed park.

Establishment of the proposed park would protect an important portion of the Sackville River which is one of the two major wildlife corridors that act as crucial travel routes for wildlife and has the additional advantage of helping to direct moving wildlife away from man-made structures such as roads.

Within the proposed park, the Sackville River Wildlife Corridor provides the richest diversity of wetland bird species. It also provides important breeding habitat for Species at Risk, such as the Common Snapping Turtle and the Wood Turtle. The Sackville River is one of the two major wildlife corridors that is responsible for the health and diversity of the wildlife species living in the park.

In addition to the two major wildlife corridors, establishment of this proposed park would protect at least a dozen smaller corridors containing important riparian and/or wetland habitats. Locations of these smaller corridors have been ground truthed and mapped out in this report thus providing important information for the more detailed decision-making process, necessary when plans are made beyond the higher, regional level planning.

View Common Snapping Turtle for more info on the smaller corridors and on the critical importance of the Sackville River Wildlife Corridor for snapping turtles. 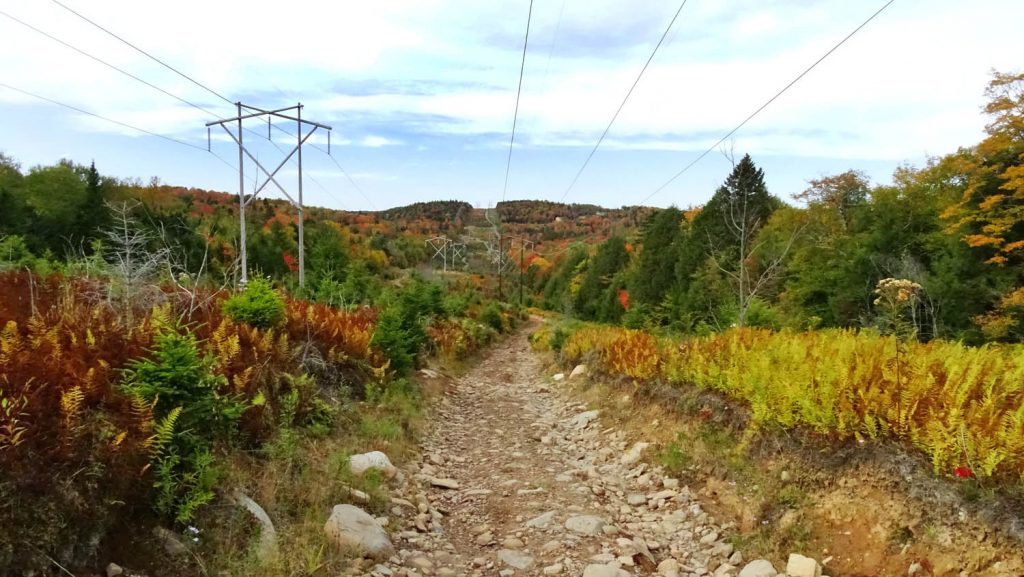 View to NE along powerline, 1B (Sandy Lake Wildlife Corridor) to the right, Sackville River Valley Corridor to the left (Oct 9, 2019). Old Forest with pockets of Old Growth on both sides. Click on image for larger version. 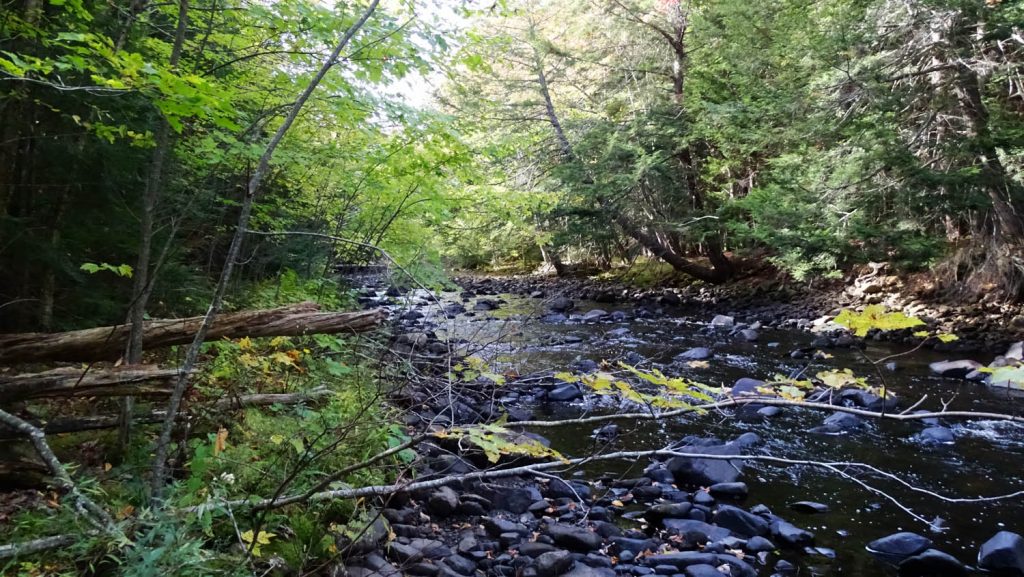 On Sackville River Valley Corridor Oct 6, 2019; view from south side 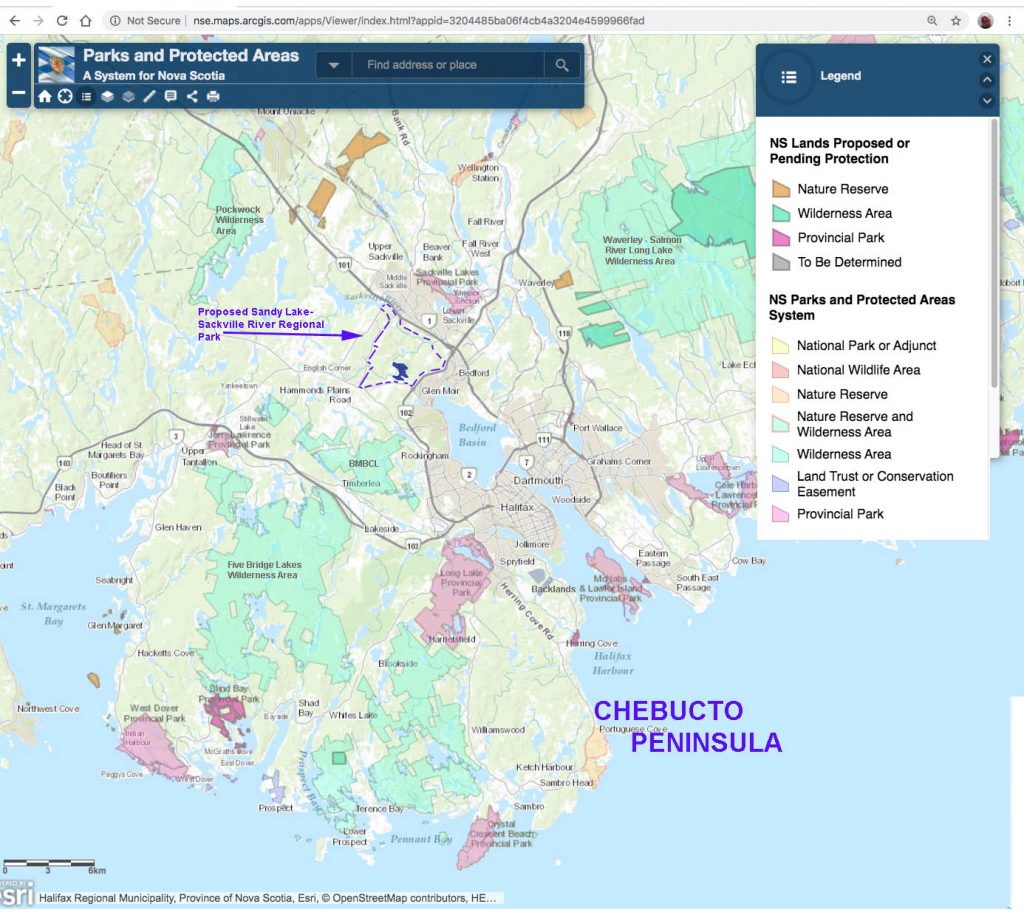 The Chebucto Peninsula, a significant conservation area. Location of the proposed SLSRRP is shown, just above the neck of the peninsula. Click on map for a larger version.

RELATIONSHIP TO THE GREEN NETWORK PLAN 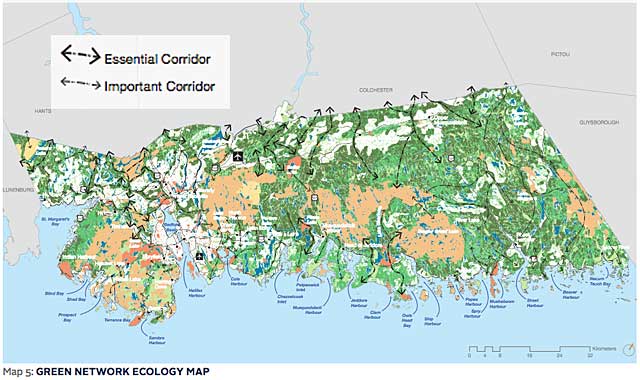 In June of 2018, Regional Council tabled the Final Draft of the The Halifax Green Network Plan   (HGNP) which “provides land management and community design direction to:
– maintain ecologically and culturally important land and aquatic systems;
– promote the sustainable use of natural resources and economically important open spaces; and
– identify, define and plan land suited for parks and corridors”

The Essential and Important Corridors shown in Map 5 above allow movement genetic exchange of plants and animals, large and small, between otherwise isolated patches of natural habitat within HRM and across the boundaries of HRM. Without those corridors, biodiversity and ecosystems services provided by our natural spaces will inevitably decline – such habitat fragmentation and isolation is a major driver of the massive species losses currently in progress globally and locally.

On Sep 24, 2019, an Amendment “to the Regional Plan’s conservation design development agreement policies to specifically reference the Important and Essential Corridors shown on Map 5)”  received unanimous approval at a meeting of Halifax Regional Council.

So these corridors MUST now be considered before any developments that might affect the corridors. 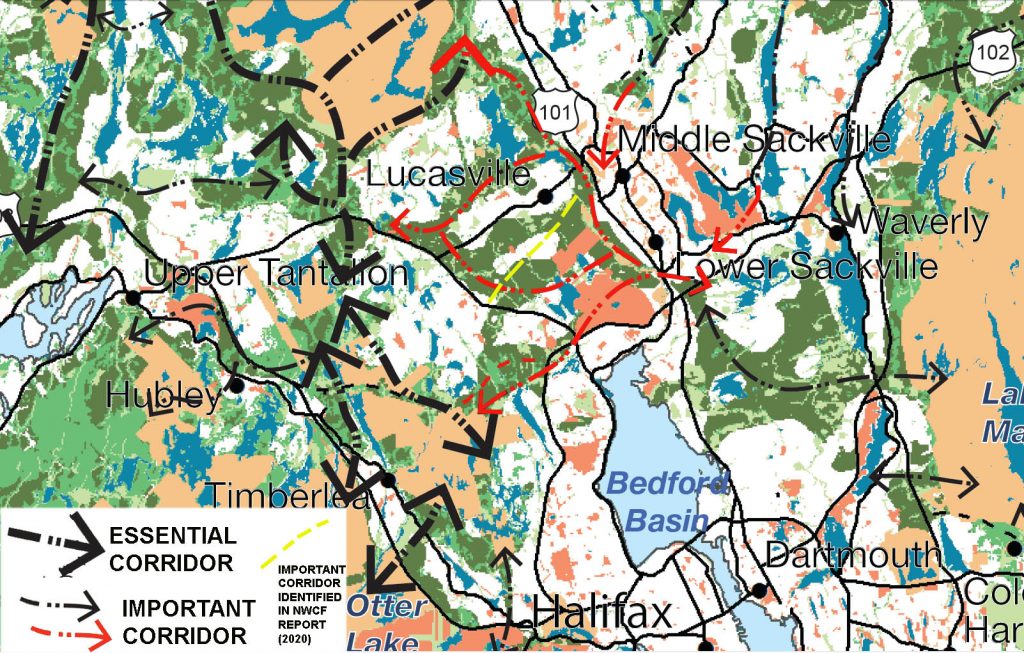 One of those Important Corridors cited in the HGNP in the area of Sandy Lake & Environs corresponds to the Sackville River Valley Corridor cited  in the NWCF Report. There is a significant pinch point at its northwest extremity within the area of the proposed SL-SRRP which would be protected by the proposed park.

However the other major corridor cited in the NWCF Report, the “Sandy Lake Wildlife Corridor” (inserted in yellow in the map above) is NOT identified the HGNP.  Clearly it is an important one in practice today and should probably be considered as an Essential Corridor.

There are two threats to that corridor

(i) The section of it above Hammonds Plains Road and in the area of Sandy Lake & Environs (the proposed SL-SRRP) lies in the lands west of Sandy Lake that are not protected and could be developed.

(ii) Below Hammonds Plains Road (view Map 5 in Appendix BB), much of the land is still not developed today, but a large area abutting on Hammonds Plains Road  has already been designated for development, re:  the Bedford West Master Plan, which will accommodate ‘up to 20,000 or even 30,000“.

As the Bedford West development is  ongoing, perhaps the developers can be convinced of the value of conserving some elements of this corridor within areas yet to altered.

The identification of Natural Corridors in the HGNP was based on map and aerial photograph analyses, and did not  include ground-truthing. Thus these corridors are fairly high level corridors and  on a local ground scale, further important corridors of local wildlife movement could be expected to occur.

As cited above, the NWCF Report identified “a dozen smaller corridors containing important riparian and/or wetland habitats.” [Perhaps that number should be 10 rather than 12, there were 12 corridors in total, two of the the major corridors; 10 are identified as smaller scale corridors]. Seven of those occur on lands that could be developed; six of those  are riparian habitats around streams entering Sandy Lake (#3,4,5,6 in the top map above) or Marsh Lake (#7,8) and are also within the lands that could be developed. One of them was observed to be an important route of movement of the common snapping turtle  (a Threatened Species for NS) to and from Sandy Lake, and it was suspected that  other of these local corridors are also important for snapping turtle. They are also vital habit for many other species.

The riparian habitats running through the regens contain many species that often use the regens for feeding purposes. The conjunction of these two habitats currently represent the highest bird densities found in the proposed park area and is the best location in the park for viewing the often-elusive Winter Wren – NWCF Report.

Some of the Riparian Forest retained within the 2013 clearcut

Comprehensive document on the related science & its application to landscape planning
Guidance on the maintenance of landscape connectivity features of major importance for wild flora and fauna – – Guidance on the implementation of Article 3 of the Birds Directive (79/409/EEC) and Article 10 of the Habitats Directive (92/43/EEC).
Marianne Kettunen et al., 2007. Institute for European Environmental Policy (IEEP),
Brussels, 114 pp. & Annexes.