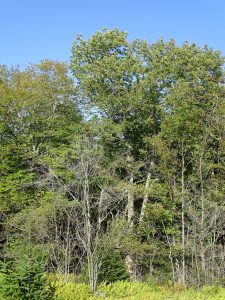 In general, white ash exists as a component, not a dominant species in the mixed Acadian forest at Sandy Lake & Environs which may bode well for its survival. View iNaturalist record for this particular
occurrence.

District 16 residents, I have received a few inquiries recently regarding the status of the Emerald Ash Borer situation in our DeWolf Park. Below is an update I received this morning from HRM’s Arborist.

“Last year, with the help of the Canadian Food inspection Agency and the Canadian Forest Service we conducted a characterization of the infestation of Emerald Ash Borer in Halifax, focusing on Bedford (ground zero). Unfortunately, our tests and samples indicated that the infestation was farther advanced than we had originally thought back when we began to remove some of the most heavily infested trees in an attempt to slow the spread. At this point, we are choosing to retain the trees as urban canopy until they completely succumb, giving us time to replant before having to loss the existing canopy entirely.

Emerald Ash Borer is an unfortunately pest, with no municipality on the continent successfully managing it. We are somewhat fortunate in Halifax in that we don’t have a particularly large population of Ash trees (whether planted or native) meaning the impact will not be as great. Further, our wet climate seems to permit the trees to live with an infestation much longer than in other parts of the county”.

– 10 trees to be removed from DeWolf Park after HRM detects Emerald Ash Borer infestation
By Alexander Quon for Global News, May 2, 2019. “Halifax Regional Municipality is removing 10 ash trees in DeWolf Park after they detected an invasive beetle species in the area…The Emerald Ash Borer is a highly destructive invasive species from Asia that has been present in Canada since 2002. However, it was first detected in Nova Scotia last year.”