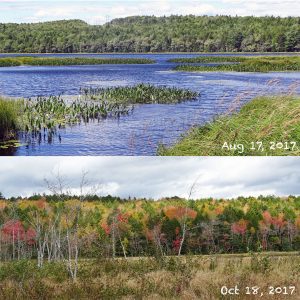 Glimpses of forest north Marsh Lake in 2017
from the area where Perverill’s Brook
enters Marsh Lake.
Click on images for larger versions
View YouTube Video: A Sense of The Place

In my field observations over the period 2017 and into 2019, I had covered the area within HRM’s conceptual boundary for a Regional Park fairly well, except for lands north of Marsh Lake (view Map 1).

On Sep 20 and 22, 2019, I walked a few routes into forest on a large drumlin just south of the Sackville River, accessed via a powerline (View Google Image below). 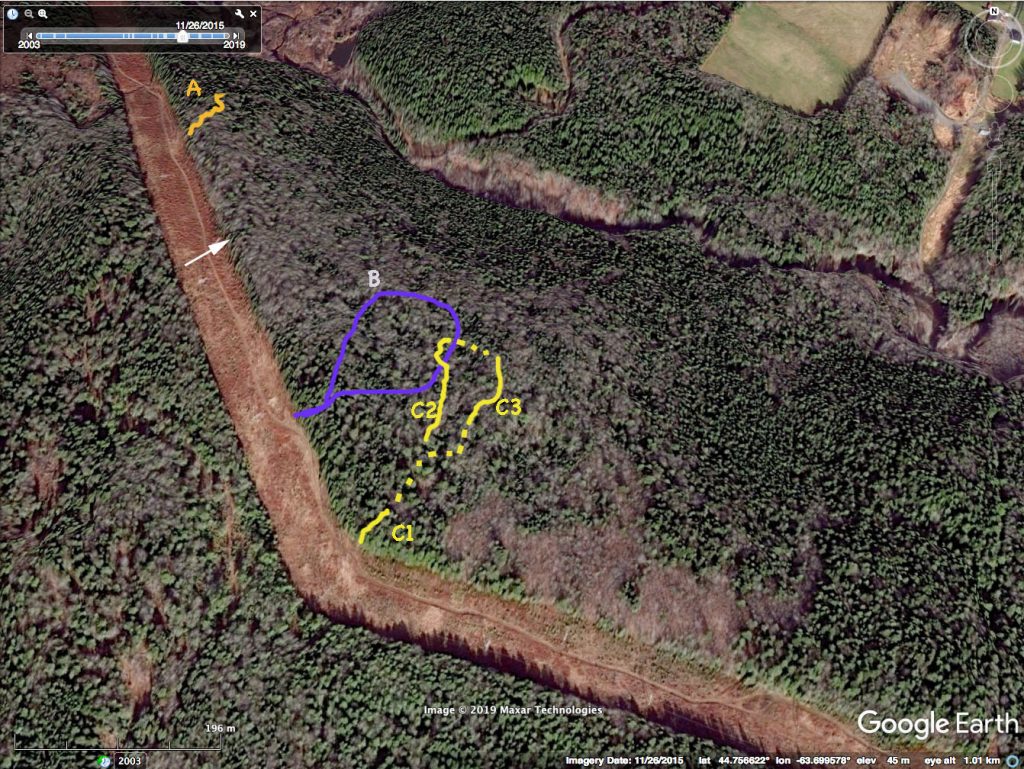 Approximate tracks (routes) on Sep 20 and 22, 2019 superimposed on a Google Earth image. The image provides some 3D perspective, showing the slope on side of drumlin going down towards the Sackville River. The lighter, grayish patches are hardwoods, the dark green, softwoods. (Google Earth image is for Nov. 11, 2015) The arrow points to a large white ash visible from the powerline – see pic below. 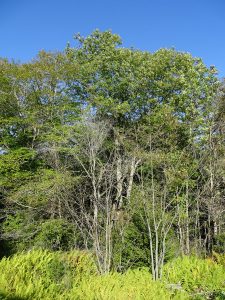 Magnificent white ash (2 trunks) viewable
at edge of forest by the powerline.
View it on iNaturalist

I was hardly disappointed. I found some of those magnificent ash trees – and a lot of magnificent specimens of other species including many of eastern hemlock, red maple, sugar maple, yellow birch, and red spruce that qualify as “Big Trees” (trees 20”, or 0.5 m, diameter at breast height and greater). View Lists of Big Trees & Ash

I didn’t see any white pine or red oak; I did see occasional oak seedlings.

I also found a magnificent specimen of what I believe to be mountain birch, a species in its own right (Betula cordifolia) or a subspecies of paper birch (Betula papyrifera var cordifolia) depending on who you talk to or on the latest scientific paper on the topic. This species or variety is not commonly recognized in NS, e.g. it is not in Gary Saunder’s Trees of Nova Scotia or in the DNR/L&F Trees of the Acadian Forest. It is cited as subspecies of paper birch in  Nova Scotia Plants. 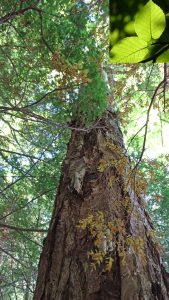 Overall I would call the forest stands I visited to be “rich tolerant mixedwoods*”. They could also be described as a patchwork of Vegetation Types MW3 /TH1 or TH2/SH1* as described in the FEC Vegetation Types Guide, all of which are considered late successional Vegetation Types.
_____________
*“Tolerant” refers to shade tolerance of seedlings. Shade tolerant species are generally the older growing species (e.g, hemlock, sugar maple) that over time replace faster growing light-tolerant species (e.g. white birch, poplars) in a successional sequence.

Some other features of note: 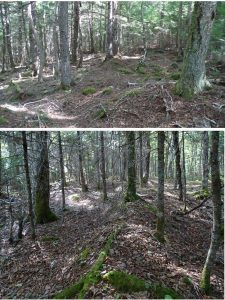 – There is a pit and mound topography through most of the routes I traversed, more pronounced in some areas than others. Their orientation in general corresponds to that I observed for pit and mound topography closer to Sandy Lake. Based on the orientation and on the similarity of the diameters of large trees as well to those in old forest stands by Sandy Lake, I suspect that many of the pit and mounds were formed at the same time as I inferred for those close to Sandy Lake, which is circa 160 years ago.

– For mounds to be formed, large trees had to have fallen, so that is some evidence that at that time (circa 160 years ago), there were very large trees present, i.e., these forests were certainly not harvested to the point of high-grading. 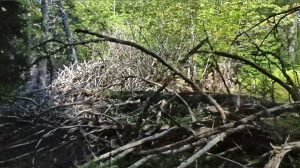 – There are a lot of large tree blowdowns, most are probably related to Hurricane Juan.

– There is a lot fallen dead wood (coarse woody debris) and snags, some of the snags developed from windsnaps.

Overall, these stands have late successional vegetation types and patches within them would likely qualify as Old Growth.

The stands I visited were indeed ‘Magnificent Mixed Acadian Forest’, and there’s more out there! 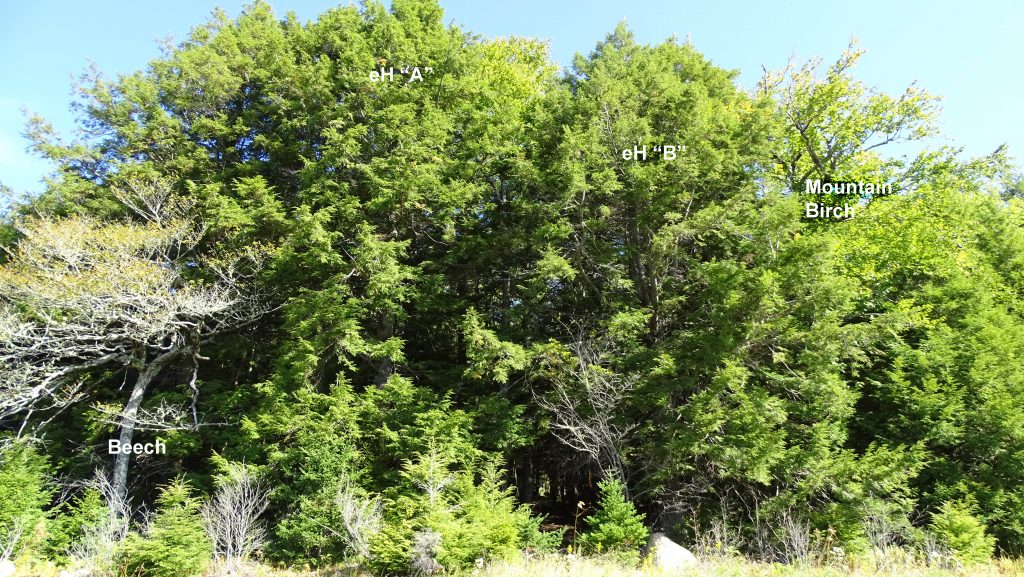 Entrance from the Powerline to C Series. Beech at left, two big hemlocks (eHA and eHB), and Mountain Birch 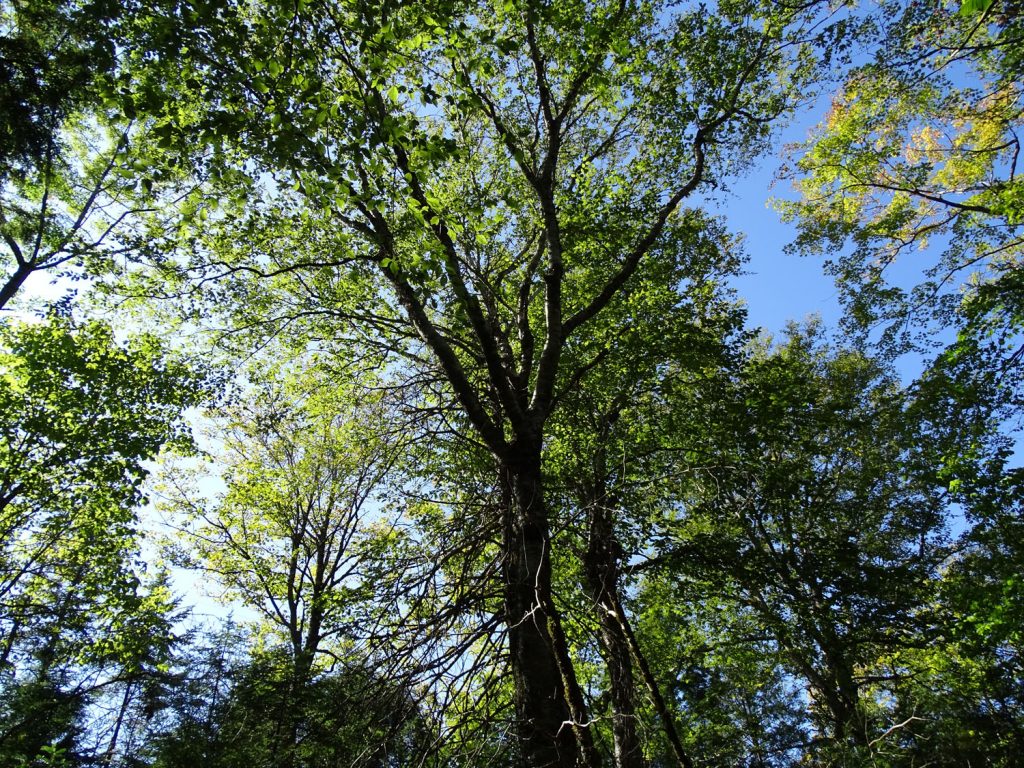 Looking up in the Hardwoods 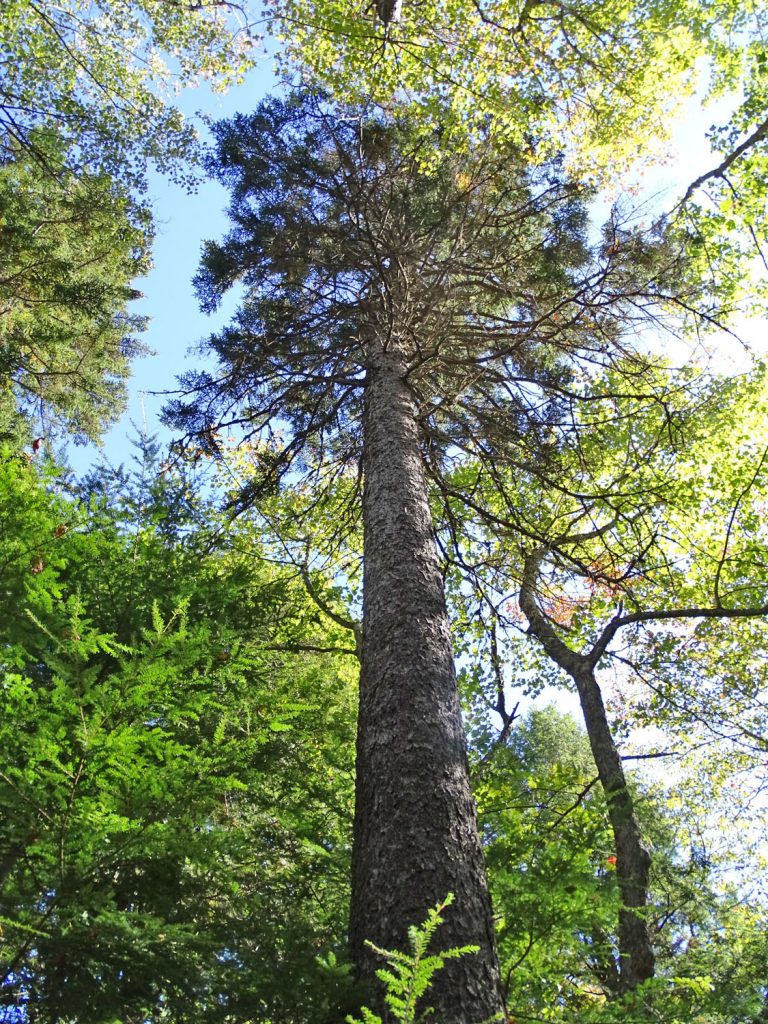 Red Spruce. The absence of limbs for a long way up indicates this tree grew up through a self thinning ‘pole stage’. Here, the canopy had been opened up by windfalls nearby. (For more about the Pole Stage, see NS Woodlot Management Home Study Course Module 3 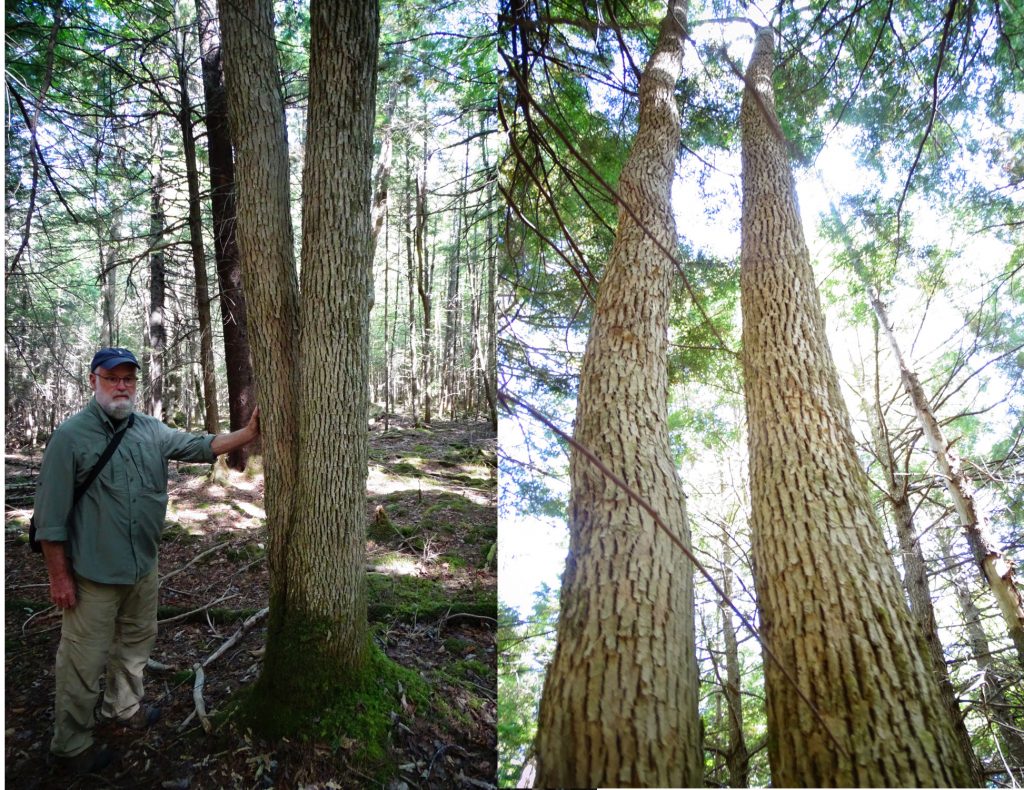 White Ash – the trees are distributed here and there, usually just a single tree, here there are two growing in close proximity 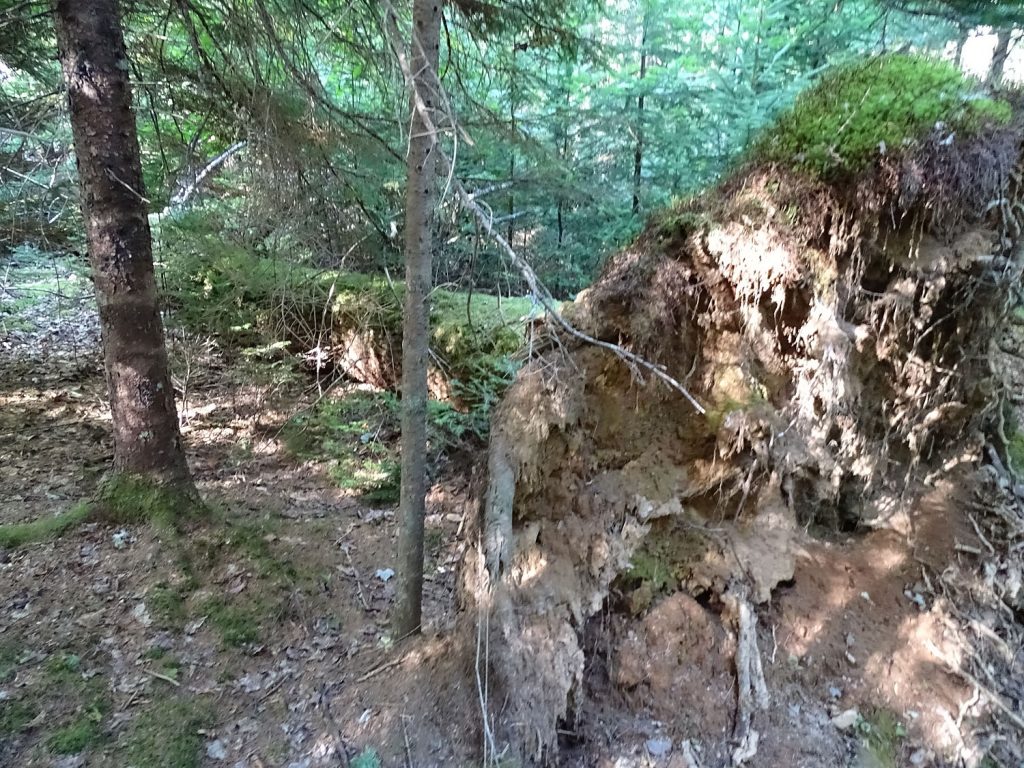 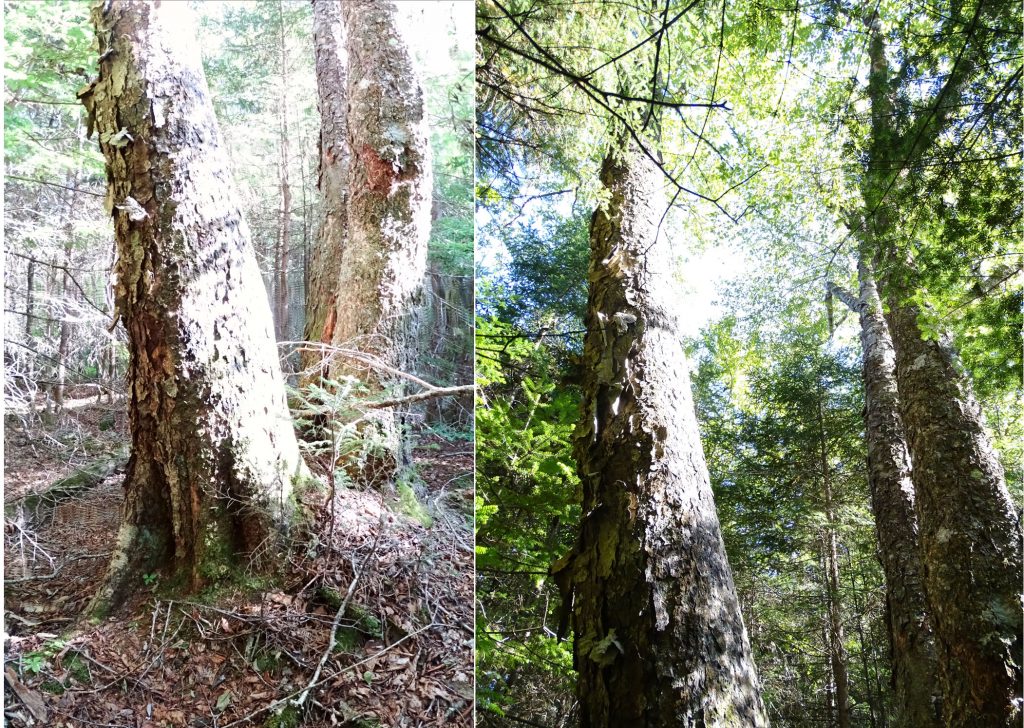 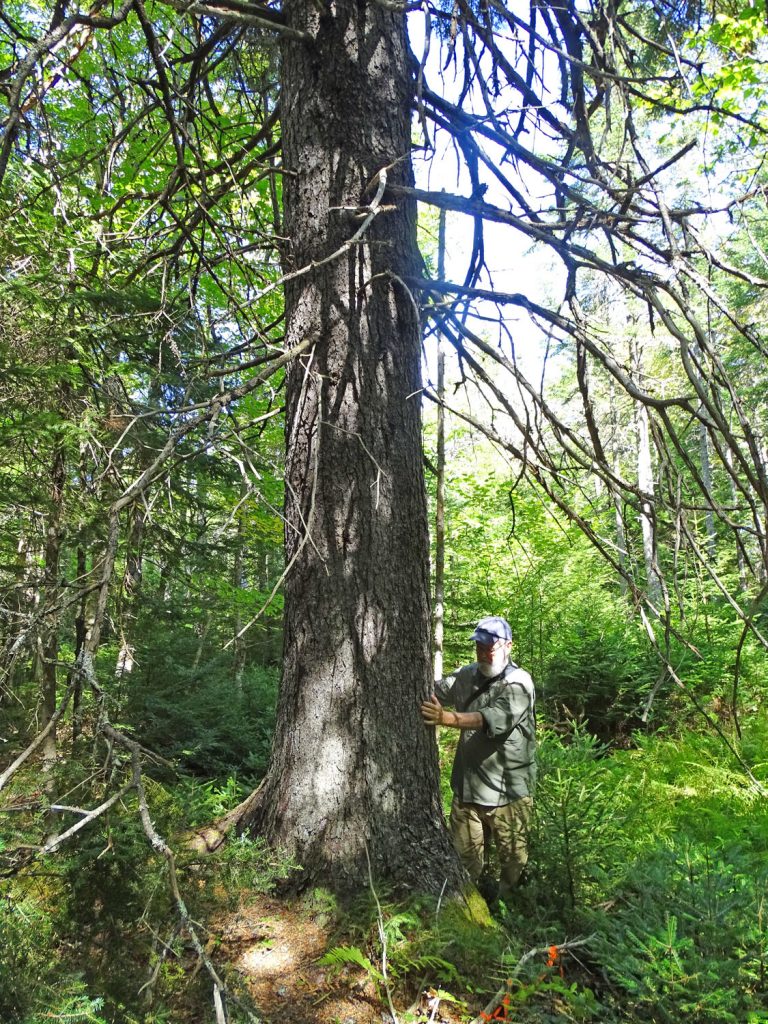