Multiflora rose, an invasive that crept up on us in Halifax, NS 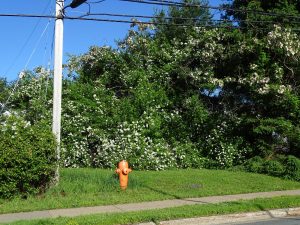 A colleague from my Dal days had a question for me: is the white rose I have in my yard an “invasive”?

He had been cycling the Grand Pre to Blomidon route in The Valley and had seen a white rose climbing over trees. He was already battling what looked like the same species growing over his garage from a neighbouring property and had another, smaller plant in his own yard. Is it “invasive”? Should he take it out?

These are question others in the Halifax area may be asking. I can’t offer definitive answers – any discussion of invasive species, even amongst ecologists*, – can be surprisingly intense – but I can offer a perspective as I have been following the advance of multiflora rose (Rosa multiflora) into the Halifax area for a while. I have also made some efforts to control it in a few areas.
__________
*E.g., there can be debate about what constitutes an invasive species, whether an invasive species is “good” or”bad” for the ecology, whether a particular species can be controlled or is worthwhile to control. 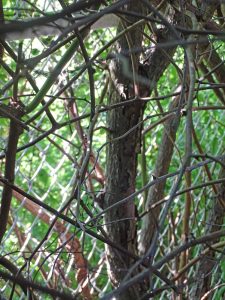 The stem on this older plant is about 2 inches
thick at its base and would require more than
hand clippers to cut!

As is usually the case with invasive plants, if there is no R. multiflora now or only a few small plants, it can be relatively easy to keep out. If it’s well established, it’s much more difficult.

However, there’s lots in Lower Sackville and I would wager it will be much more abundant closer to Sandy Lake in a couple of years.

So now is the best time to control it/keep it out in those areas – or in any area in HRM where it is not currently abundant or large.

This entry was posted in Invasive Species. Bookmark the permalink.