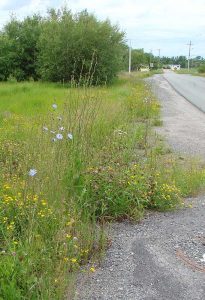 Typically more than 50% of the species on our roadsides are of exotic origin. We recognize many as “wildflowers”. They stabilize disturbed soils and provide food for wildlife.Very few invade intact habitats dominated by native species
View: Weedy immigrants adorn N.S.

It’s appropriate to distinguish between exotic species and invasive species. Approximately one-third of the 2000+ vascular (higher) plant species in Nova Scotia flora are species of exotic origin, i.e. species that arrived here concurrent with  European settlement, and ongoing. Those present in pre-European times are considered “native species”. Most of the exotic species are found in open (non-shady), disturbed, human-made habitats. Examples are dandelion, wild carrot, plantain. Many came over as weeds in bags of grain or forage seed that were planted here by settlers, or are forage species that naturalize (go wild) quite readily, e.g red and white clover, timothy grass.

Most of our garden plants are of exotic origin. Most do not “naturalize” (go wild), but a few do. They may just blend in with the other exotic species of open, disturbed habitats.

Very few of these exotic species become invasive, meaning they are aggressive colonizers that displace or suppress native species.

Of plants commonly described as invasive in Nova Scotia, most will colonize only open, sunny habitats and they do not penetrate far into habitats dominated by large native shrubs and trees. An example: e.g. Japanese knotweed. Also, in Nova Scotia, the highly acidic, nutrient-poor soils over much of our landscape are another impediment to colonization by many exotic species.

The only exotic species that I know of will penetrate  habitats dominated by large shrubs and trees: glossy buckthorn, and multiflora rose. I encountered both during my surveys:

Rosa multiflora in flower and in fruit

– Multiflora rose (Rosa multiflora): there are a few plants on Smith’s Road and at the beach area.  It’s worth monitoring and keeping it under control at this point as once it gets going, forget it. (See Multiflora rose in Point Pleasant Park for an example of how quickly it can spread.) View more about it in the subsection on Rosa multiflora.

– Glossy buckthorn (Rhamnus frangula) I noted only one plant, not reproductive and ID still to be confirmed;  it is also in the vicinity of the parking lot on Smith Road; likewise I suggest monitoring and control (removal) of existing plants.

There are other species that are invasive in open wetlands, e.g.purple loosestrife, reed canary grass (also multiflora rose). We should keep an eye out for aquatic invasive plants, notably yellow floating heart (Nymphoides peltata)
———- 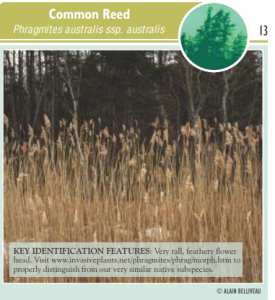 One to keep an eye out for: Phragmites:

– Dog-strangling vine
“DSV is a highly invasive plant that threatens the endangered Monarch butterfly. Monarch butterflies will often mistake DSV as native milkweed and oviposit onto DSV foliage, which is toxic to larvae and causes a loss in generational spawn. DSV outcompetes native plants and causes an overall loss in biodiversity.” It has been found in Kentville, NS

View details about the species on www.invasivespeciescentre.ca

Vegetative choke hold: Invasive dog-strangling vine found in Nova Scotia communities
Kirk Starratt on saltwire July 14, 2020 ““The occurrence in Wolfville was maybe around 10 to 20 plants and was on a really small street,” Belliveau said. With permission, they managed to pluck most of it out.The occurrence in North Kentville is on a residential street, where it has already spread approximately 100 metres. Belliveau said they are worried that it could spread much farther…Belliveau said dog-strangling vine is a member of the milkweed family, with one major distinction. Unlike milkweed, the vine doesn’t provide food and nesting habitat for Monarch butterflies, an endangered species. “If the Monarch pulls up and lays its eggs on dog-strangling vine, the larvae might actually die as a result,” Belliveau said.” A community event to remove it in Kentville has been organized for Sat Aug 7, 2021.