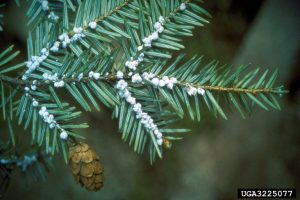 Hemlock Woolly Adelgid. “Their name comes from waxy white filaments they make to protect themselves from drying out. These “hemlock vampires” were first discovered in 1951 in Virginia, and by 2005 had spread to fifteen other states.
Source: Paul Hetzler, Cornell Cooperative Extension
Photo source: Connecticut Agricultural Experiment Station, Bugwood.org

We learned of the arrival of this  really horrible pest, the Hemlock Wooly Adelgid (HWA), aka the Hemlock Vampires, in NS (and in all of Atlantic Canada) only in Aug of 2017, which seems like ages ago now.

When first discovered, it had already spread though  three counties at the southwest extremity of NS (Digby, Yarmouth and Shelburne) so likely had hopped across the gulf of Maine (or got a ride on some wood) from infected areas in the northeastern USA – see map. It is not known in N.B.

The latest update (Dec 31, 2022, below) shows it spreading progressively though the province, now many confirmed sites  in Annapolis and Queens Co.  and a few in each of Kings and Lunenburg Co. 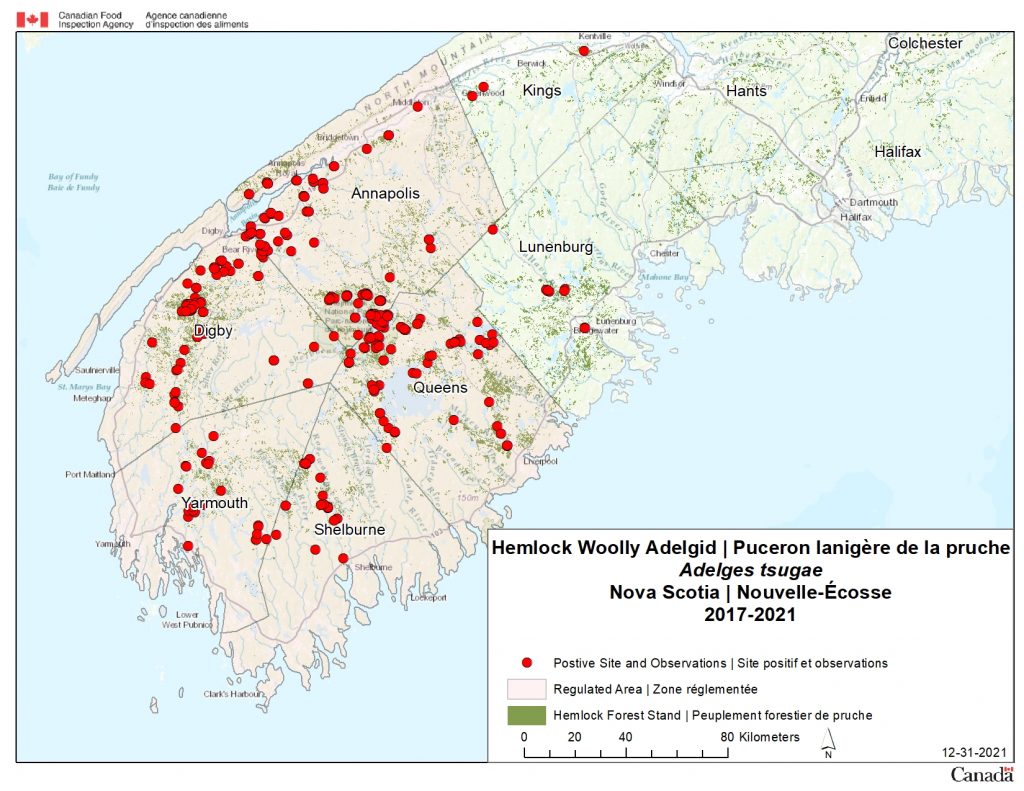 Confirmed occurrence of HWA in NS 2017-2021 (red dots). Green dots show the distribution of eastern hemlock in the southwest to central part of the province. Click on image for larger source image on the Nova Scotia Hemlock Initiative website.

So it’s pretty likely it will be in Hants and Halifax counties soon if not already there. 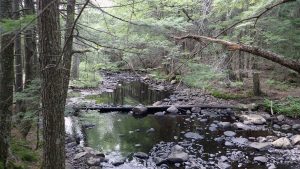 Mixed forests with hemlock and hemlock dominated forests prevail around much of Sandy Lake and Marsh Lake, some of the stands over 200 years old.

The sooner we ID the pest (once arrived), the better. The key thing to be on the lookout for, especially  in early spring when they are most prominent,  are the “cotton balls” on the underside of hemlock branches. Always check any branches that might have fallen from the tops of trees. If spotted, take a pic and report it right away to the CFIA.

There are steps that we can take to slow the movement down that we should all practice whether we have it in our home county or not.  Here’s the advice From Giants of Nova Scotia:

Preventing HWA from getting to a new hemlock forest is key to slowing the spread. On its own, HWA spreads very slowly. Humans are very mobile and have the potential to relocate the bug 100s of miles in a single trip. So what can you do?

When you visit a site infested with HWA (or one that could be):

It’s a good practice to change your clothes after you leave a potentially infested area. And please avoid immediately visiting an uninfested hemlock stand.

There are more drastic steps that can be taken using systemic (injected) pesticides to protect a few trees or a small stand.

Here are a few links providing info on identifying hemlocks, the pest, and measures to slow its spread: