On Aug 20, 2020, I checked out a few sites on watercourses south of Hammonds Plains Road that feed into Sandy Lake via Johnson’s (Bob’s) Brook, notably in sub-area 12 of the Bedford West Secondary Planning Strategy (see page 11 in that doc showing Bedford West Development sub-areas).

I walked portions of those watercourses, took photos and measured Electrical Conductivity (EC) of surface water, also I checked EC of surface waters at a few points north of Hammonds Plains Road.

Electrical Conductivity Measurements Aug 20, 2020. The coloured part of the map is within the sandy lake watershed.
Click on image for larger version

There is a large wetland in sub-area 12 and the stream flowing north from it goes through a hemlock lined, steep sided stream corridor; the land east of it is a recovering clearcut. The water EC was high (567 uS/cm) in the stream which was flowing but barely (it had been very droughty).  EC was likewise high in the wetland a short distance upstream, and high (700 uS/cm) in water coming out of the northern-most of two culverts on the east side of Larry Utech Blvd (Kearney lake Road).  No water was flowing out of the other culvert. This suggests that the high EC/salt content is coming from the tributary draining land west of sub-area 12. It all needs to be followed up when there is higher streamflow.

The area is currently mostly undeveloped, but has  been designated for development, re: the Bedford West Master Plan, so it important that the watercourse is protected. The area is also significant as a wildlife corridor. 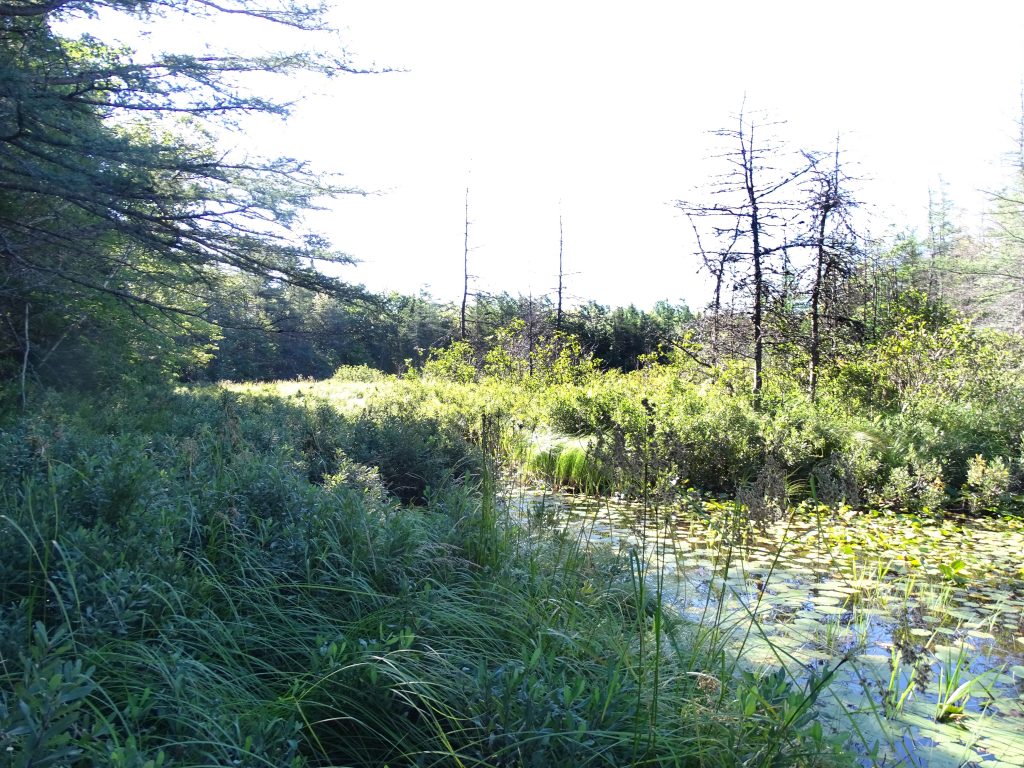 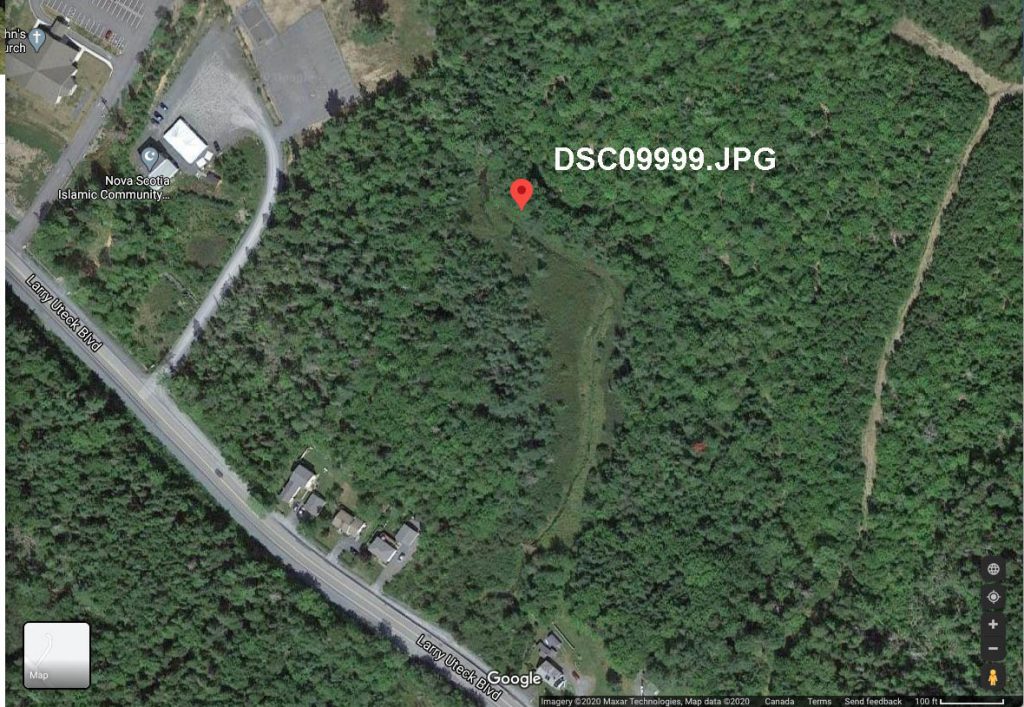 Site where photo above was taken, looking south- most of the wetland is not visible in the photo above. 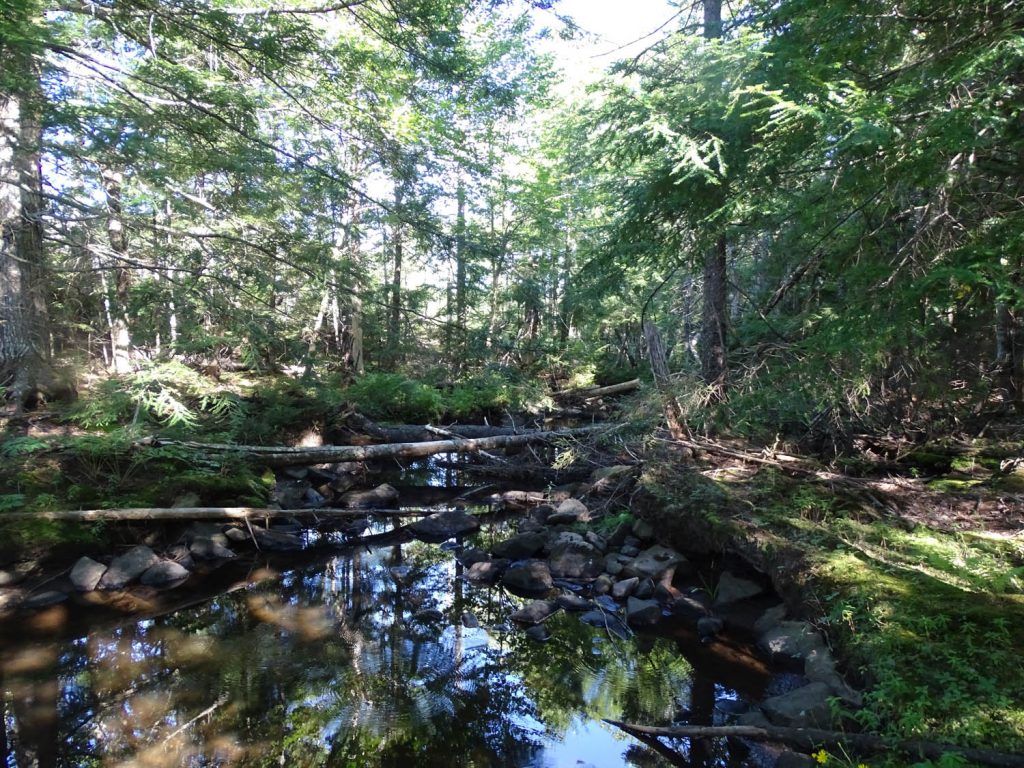 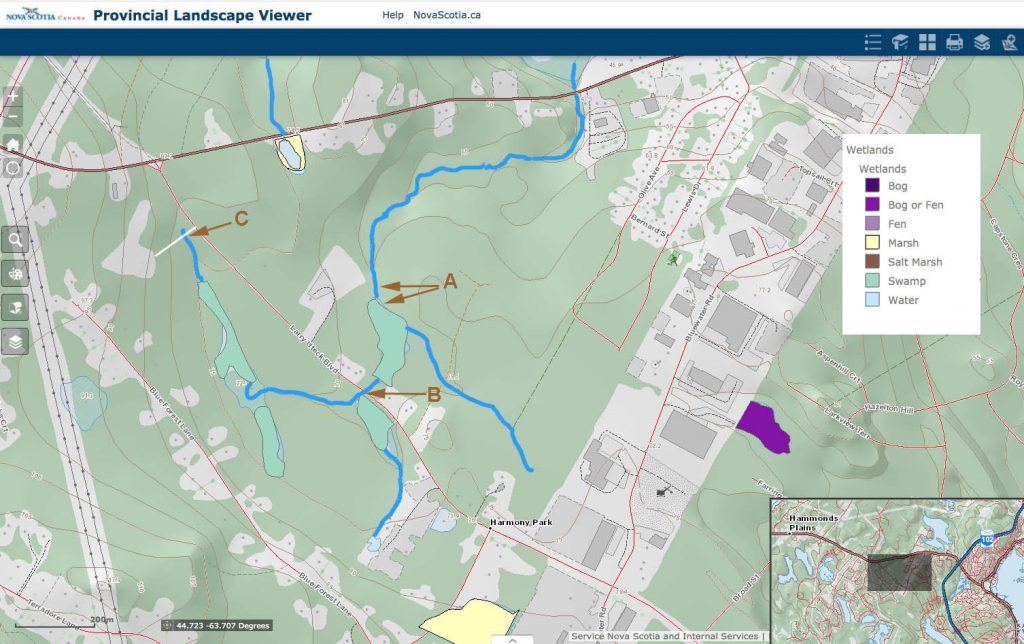 A, B and C are sites observed on Aug 20, 2020. There is a large culvert but there was no water at C (it had dried out). Streams identified on the PLV are highlighted. 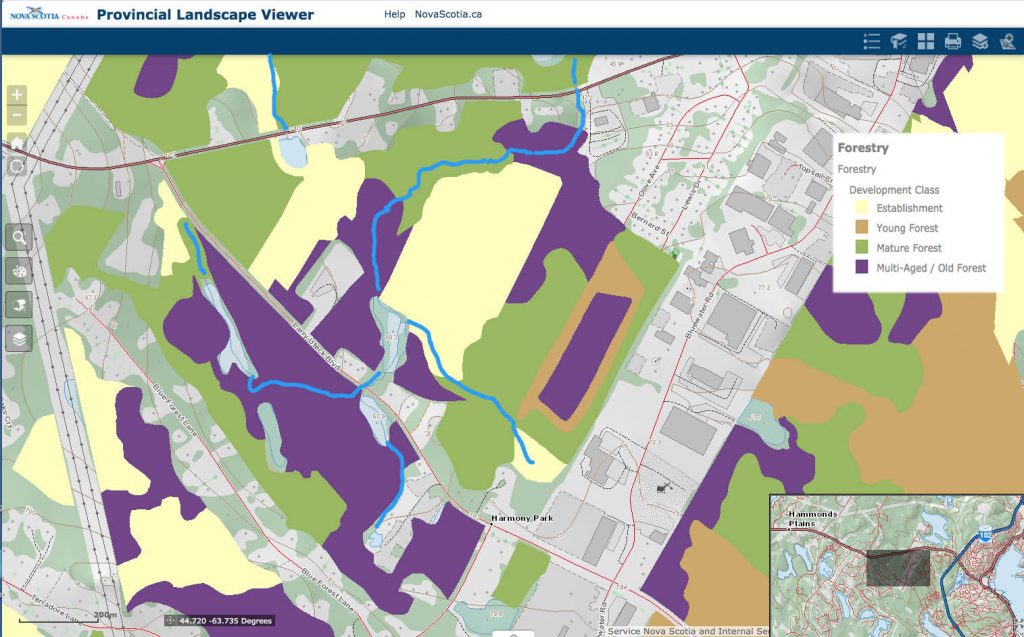 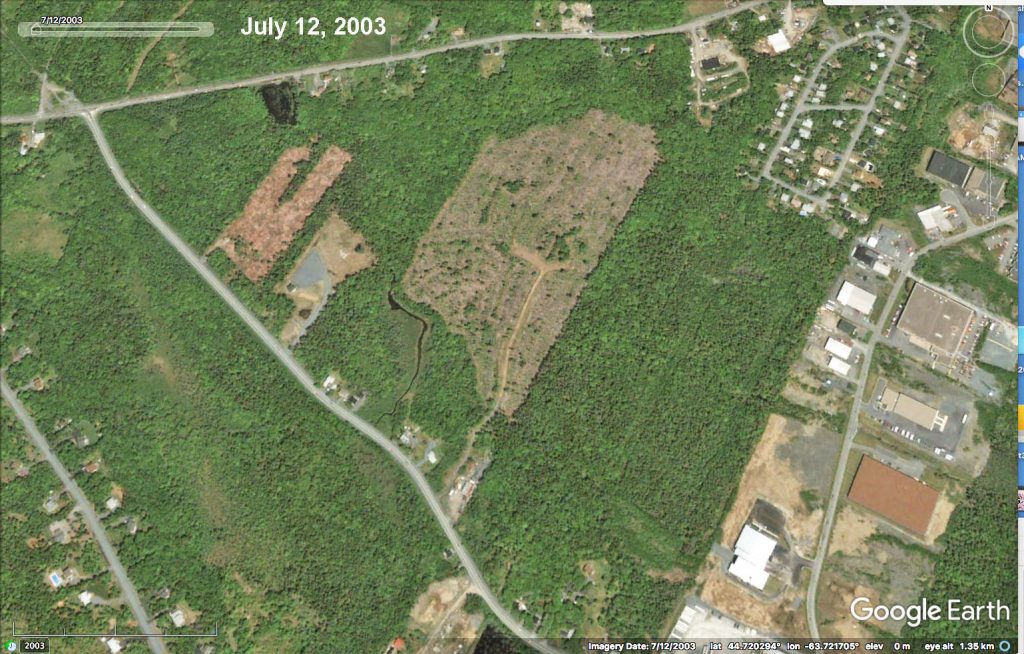 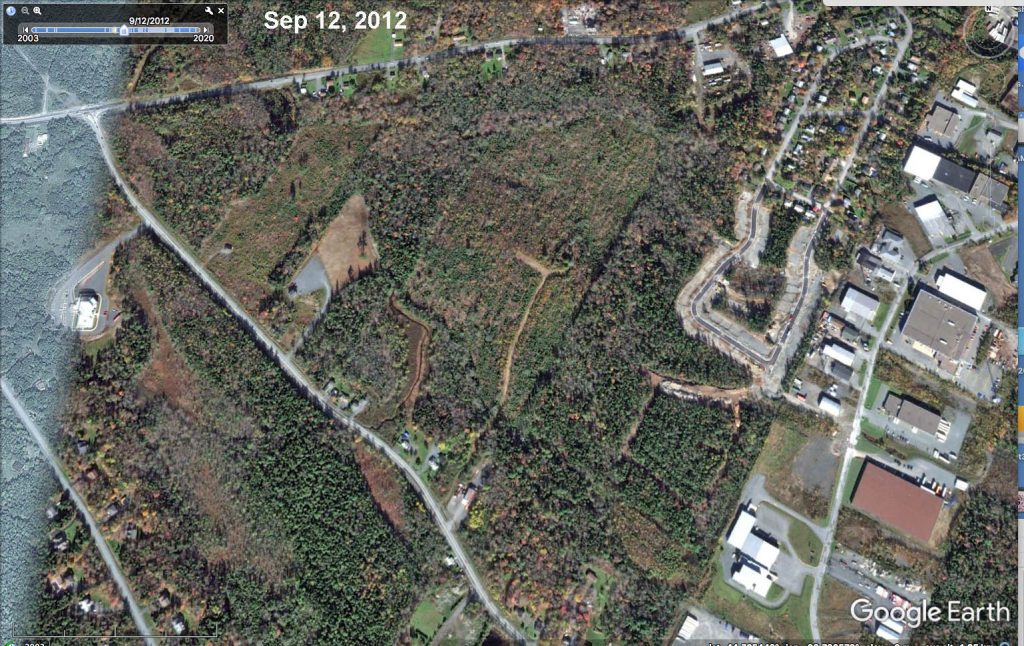 2012 New development on east side 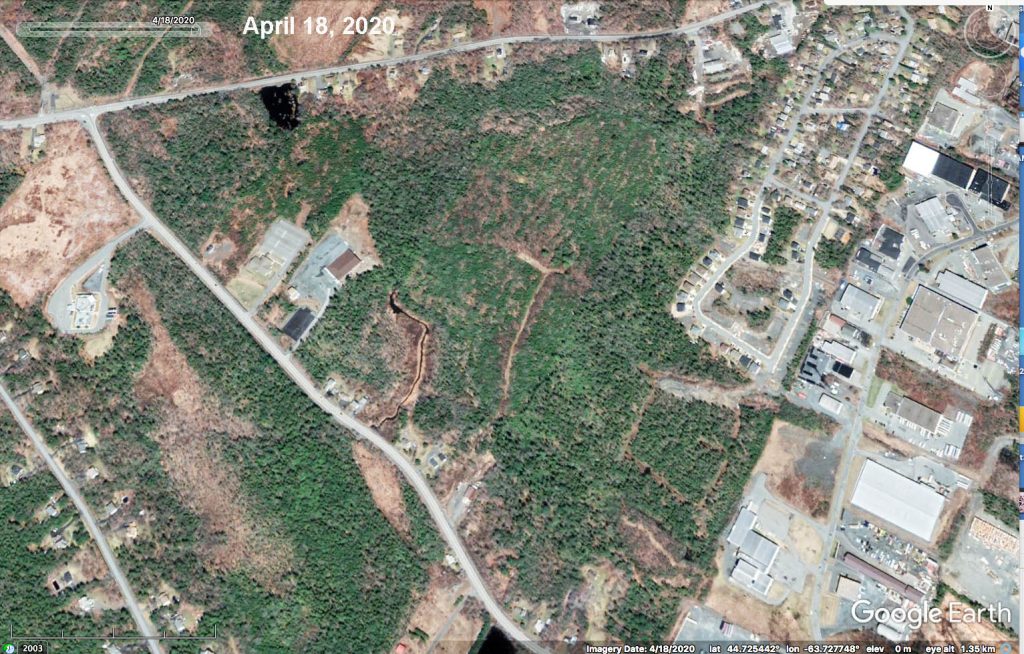 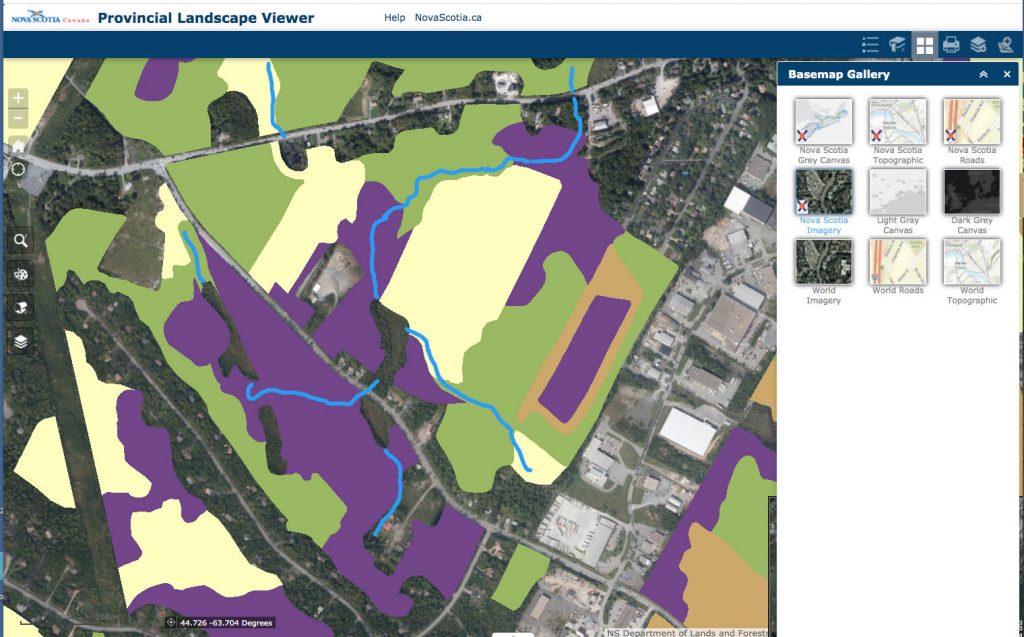 Nova Scotia Imagery Layer added to Forest Development Class Layer on PLV. A lot of the open land in ‘the Triangle’ has been approved for development.  What needs to be kept to protect hydrological regimes and wildlife corridor? 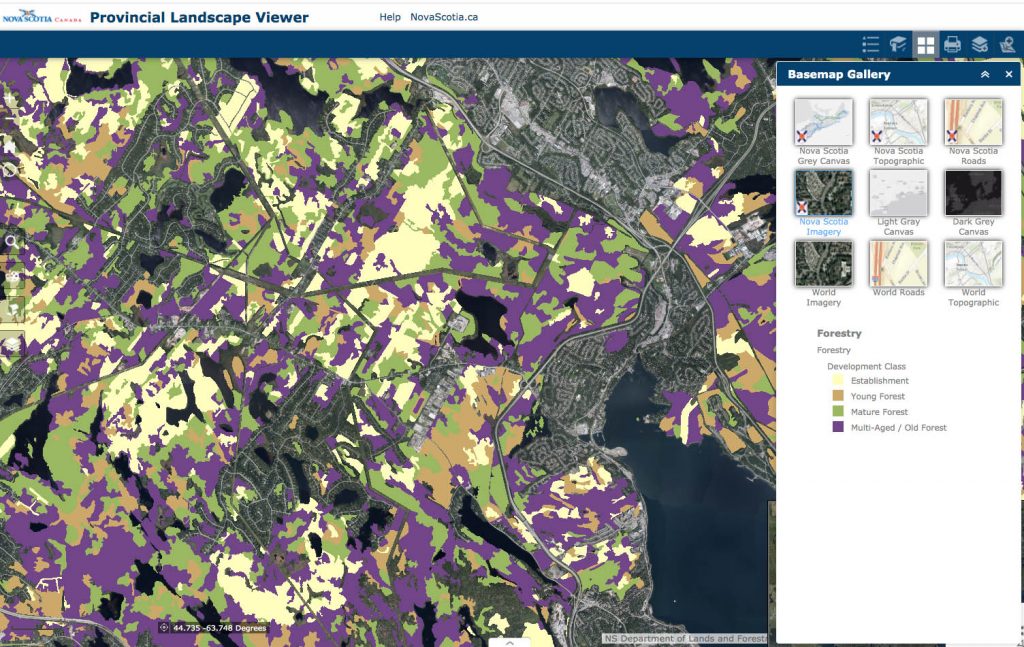