Electrical Conductivity (EC)  of water increases with increasing content of ‘salt’ in the water, where  the word “salt” is used in the chemical sense.

The standard unit for electrical conductivity of water is ‘microsiemens per centimeter’ or uS/cm. 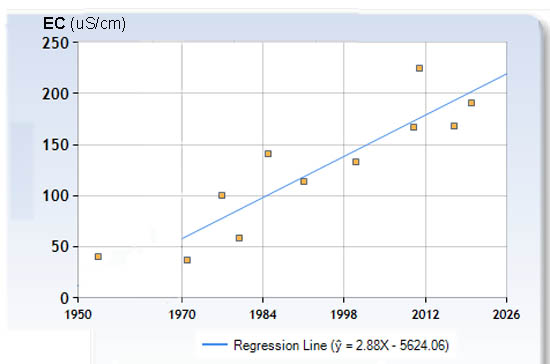 EC appears to have been stable up to 1971, then increases continuously. Only the 2020 value is a an average for values (11) over a whole year. View sources 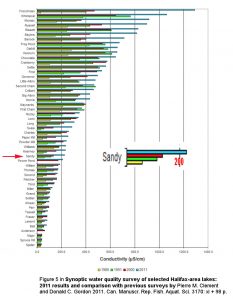 Electrical Conductivity of lakes in Halifax area over 40 years. Click on image for larger version

Electrical conductivity (EC) tends to increase with urbanization.6 In Nova Scotia, our liberal use of road salt is blamed for much of the trend of increase in conductivity in EC of Halifax area lakes over the interval 1980-2000 as revealed in synoptic studies (see Figure at right)7

Limnological profiles of Sandy Lake obtained in 2017 and 2019 revealed that the deeper waters are saltier than surface waters, likely due to increasing salt input to the lake as the watershed has become more settled. If the trend continues, it could result in the lake not turning over (mixing) as it normally does in the fall and spring. View Limnological Profiles

Hence it is relevant to try to figure out where the salt is coming from. The salt content itself acts as a kind of tracer, and is easy and inexpensive to measure.

EC values for water around the perimeter of Sandy Lake in Aug of 2017  were highest at the inlet at the SW corner of the lake where Johnson’s Brook enters the lake. View Map. Several streams converge with Johnson’s Brook at Murphy’s Pit. Several followup sets of observations were made on these streams: