“EC” is shorthand for Electrical Conductivity, often referred to as just “Conductivity”  It is a property of water routinely included in water quality measurements. Along with temperature and oxygen (and usually pH) it is one of the basic variables that is measured with multi-parameter water-quality instruments to characterize “vertical profiles” of lakes.

Conductivity, in particular specific conductance, is one of the most useful and commonly measured water quality parameters . In addition to being the basis of most salinity and total dissolved solids calculations, conductivity is an early indicator of change in a water system. Most bodies of water maintain a fairly constant conductivity that can be used as a baseline of comparison to future measurements.  – from Fondriest

If all of the major ions (cations and anions) are measured, a “Theoretical Conductivity” can be calculated. Typically the calculated values are very close to observed values; if not it’s an indication that something has been missed in the ion analysis, e.g., metals that could be entering surface waters from  mining operations. View Calculating the conductivity of natural waters by Rich Pawlowicz Limnol. Oceanogr.: Methods 6, 2008, 489–501. A Simplified Model to Estimate the Concentration of Inorganic Ions and Heavy Metals in Rivers by Clemêncio Nhantumbo et al., Water 2016, 8, 453

“Specific Conductance” is the EC at 25°C 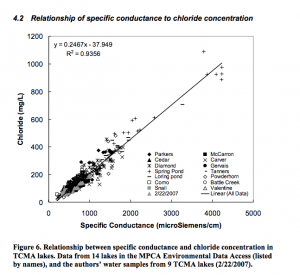 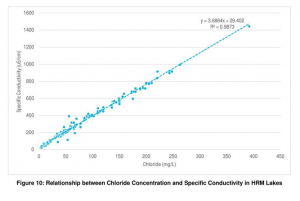 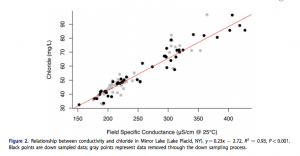 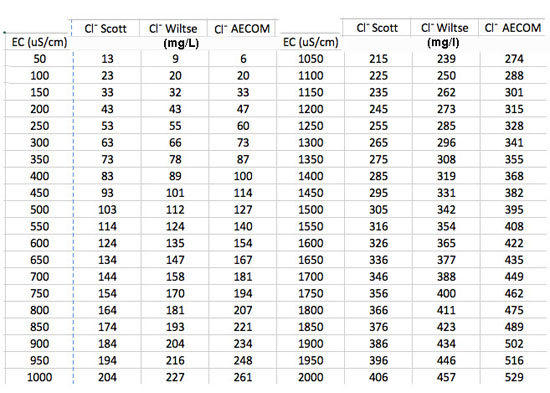 *From Conductivity, Salinity & Total Dissolved Solids: What is Conductivity on fondriest.com; except that the lowest value for freshwater streams was changed from 100 to 25 to better represent values in Nova Scotia.

Most lakes without significant development or seawater influence  in NS have values in the range 30 to 400 uS, the higher values commonly associated with lakes with high calcium content in areas of gypsum or limestone deposits – View Nova Scotia Lake Chemistry Data

EC tends to vary with Ecoregions which are “areas of relative homogeneity based on landuse,  soils, land and surface form, and potential natural vegetation” – see Water on the Web/Ecoregions for examples.

The size of the watershed (lake basin) relative to the area of the lake (Aw : Ao ratio) – A bigger watershed to lake surface area means relatively more water draining into the lake because of a bigger catchment area, and more contact with soil before reaching the lake. (On Water on the Web)

Effects of Forest Cutting and Herbicide Treatment on Nutrient Budgets in the Hubbard Brook Watershed‐Ecosystem
Gene E. Likens et al., 1970. A classic field scale experiment. “All vegetation on Watershed 2 of the Hubbard Brook Experimental Forest was cut during November and December of 1965, and vegetation regrowth was inhibited for two years by periodic application of herbicides…Electrical conductivity increased about 6—fold in the stream water after deforestation and was much more variable.”

On-farm measurements of pH, electrical conductivity and nitrate in soil extracts for monitoring coupling and decoupling of nutrient cycles
D.G. Patriquin et al., 1993. Biological Agriculture and Horticulture 9: 231-272 “Concepts of interacting nutrient and proton cycles, “decoupling” of mineralization and uptake, and the steady state soil solution, developed mainly to assess impacts of acid rain on forests and their catchment waters, are very pertinent to biological agriculture. In particular, they illustrate how decoupling of soil-plant nitrogen cycling also decouples cycling of protons and basic cations (chiefly Ca, Mg, K), and can result in acidification of soil and in loss of cations as well as of nitrate.”

The Exchange of Dissolved Substances between Mud and Water in Lakes
Clifford H. Mortimer 1942. Journal of Ecology 30: 147-201 Classic (foundational) paper linking solubilization of iron and manganese and phosphorus under anoxic conditions. Over the anoxic period, EC rose by about 40 uS/cm

Chesley Lake 1991 Water Quality Assessment
Ontario Ministry of Environment, 1993 Illustrates increase in electrical conductivity of about 30 uS/cm in hypolimnion water associated with anoxia and release of iron and manganese. Phosphorous is also released.

Water Quality Assessments – A Guide to Use of Biota, Sediments and Water in Environmental Monitoring
Second Edition Edited by Deborah Chapman © 1992, 1996 UNESCO/WHO/UNEP.  p. 338: “Depletion of oxygen in lake bottom waters and the onset of anoxia results in the remobilisation of phosphorus and other elements from lake sediments. This mechanism was described by Mortimer (1942) and has been the subject of many investigations. Project Hypo (Bums and Ross, 1971) followed the release of phosphorus during anoxia in the hypolimnion of Lake Erie. It was also noted that with decreasing redox potential, manganese was the first element to be released from bottom sediments to the hypolimnion, followed by the synchronous release of iron and phosphorus. The association of phosphorus with iron in bottom sediments has been well established (e.g. Williams et al., 1976) and the reduction of Fe3+ to soluble Fe2+ results in the release of phosphorus. Other elements adsorbed by, or co-precipitated with, the oxides of iron and manganese are also released to the bottom waters under anoxic conditions.”

On Water on the Web
“…when lakes are thermally stratified for long periods of time (in Minnesota this might be May – November depending on the basin shape, lake depth and weather). During this period, there is a steady “rain” of detritus (dead stuff, mostly algae and washed in particulate material from the watershed) down to the bottom. This material is decomposed by bacteria in the water column and after it reaches the sediments. Their metabolism releases the potential energy stored in the chemical bonds of the organic carbon compounds, consumes oxygen in oxidizing these compounds, and releases carbon dioxide (CO2) after the energy has been liberated (burned). This CO2 rapidly dissolves in water to form carbonic acid (H2CO3), bicarbonate ions (HCO3- ) and carbonate ions (CO3-) the relative amounts depending on the pH of the water. This newly created acid gradually decreases the pH of the water and the “new” ions increase the TDS, and therefore the EC, of the hypolimnion.”

From Chlorides in Fresh Water by Molly Hunt et al. 2012:

The use of road salts for deicing in snow-belt states such as Rhode Island began in the 1940s and sharply increased in the 1970s. Chlorides are the “active” ingredient in most commercial deicers, whether they are made with sodium chloride or new alternatives like potassium chloride. When ice and snow begin to melt in the winter and spring, chloride concentrations spike in roadside streams due to road runoff. When roads are pretreated in anticipation of snow and ice but precipitation comes as rain, chloride from pretreatments is washed off with stormwater. Uncovered salt storage piles lose about 20% of their salt each year, much of which finds its way into nearby waterways.

Chloride concentrations tend to be higher in areas with pavement and other treated surfaces because stormwater and snowmelt runoff does not have a chance to soak into the ground before entering rivers, lakes, and streams. Road salts travel farther from roads when the speed limit is high; they have been observed traveling over 40m (130 ft) from the side of major highways (Karraker, 2008). Concern over the release of sodium into the environment has prompted many communities to switch to other chloride road salts; however, these salts may be more toxic to aquatic organisms than sodium chloride road salts (Mount et al., 1997). Commercial road salts have phosphorus compounds added to keep them from clumping, contributing nutrient increases in lakes and streams. Road salts often have heavy metal additives, so high chloride concentrations may indicate the presence of other harmful substances in lakes and streams.

Population density of Brown trout (Salmo trutta) in extremely dilute water qualities in mountain lakes in southwestern Norway.
Enge, E.; Kroglund, F. 2011 Water, Air, Soil Pollut.219, 489−499. We have examined populations of brown trout in low conductivity mountain lakes (5.0-13.7 mu S/cm and 0.14-0.41 mg/l Ca) in southwestern Norway during the period 2000-2010. Inlets to the lakes were occasionally even more dilute (2007; conductivity = 2.9-4.8 mu S/cm and Ca = 0.06-0.17 mg/l). The combination of pH and conductivity was the best predictor to fish status (CPUE), indicating that availability of essential ions was the primary restricting factor to fish populations in these extremely diluted water qualities. We suggest that conductivity < 5 mu S/cm is detrimental to early life stages of brown trout, and subsequently that there are lakes in these mountains having too low conductivity to support  self-reproducing trout populations. Limited significance of alkalinity, Ca, Al, and color suggests that effects of ion deficit apparently overruled the effects of other parameters.

Can you determine water hardness from conductivity or total dissolved solids measurements?
On global.com

The influence of ion composition of water on its electrical conductivity
Ivan Tikhonov on tiwater.info