from Threats and Limiting Factors

The causes of the widespread decline of Atlantic Salmon (WWF 2001) are not well understood. Several major reviews have attempted to identify and prioritize causes but there is currently no consensus. For example, a group of experts discussed 62 factors potentially threatening the survival of Atlantic Salmon in eastern North America (Cairns 2001). Of the 12 leading factors, five were related to predation, five to life history, one to fisheries, and one to physical/biological environment. Furthermore, two were related to freshwater life stages, nine were related to marine life stages, and one was related to a freshwater cause that manifested itself in the marine stage.

Throughout the range of Atlantic Salmon, poor marine survival has been cited as the primary cause for observed declines (Potter and Crozier 2000, Reddin et al. 2000, Amiro 2003, Gibson et al. 2004, 2009). Poor marine survival continues to threaten many populations of Atlantic Salmon despite a massive reduction in fishing mortality (COSEWIC 2006b) and adequate freshwater conditions in most, but not all (see DU 14) areas (DFO 2008, Breau et al. 2009, Cameron et al. 2009, Chaput et al. 2010). While the mechanism(s) of marine mortality is uncertain, what is clear is that the recent period of poor sea survival is occurring in parallel with many widespread changes in the North Atlantic ecosystem…

This species requires rivers or streams that are generally clear, cool and well-oxygenated for reproduction and the first few years of rearing, but undertakes lengthy feeding migrations in the North Atlantic Ocean as older juveniles and adults. This population breeds in rivers from northeastern mainland Nova Scotia, along the Atlantic coast and into the Bay of Fundy as far as Cape Split. Small (one-sea-winter) and large (multi-sea-winter) fish have both declined over the last 3 generations by approximately 59% and 74%, respectively, for a net decline of all mature individuals of about 61%. Moreover, these declines represent continuations of greater declines extending far into the past. During the past century, spawning occurred in 63 rivers, but a recent (2008) survey detected juveniles in only 20 of 51 rivers examined. There is no likelihood of rescue, as neighbouring regions harbour severely depleted, genetically dissimilar populations. The population has historically suffered from dams that have impeded spawning migrations and flooded spawning and rearing habitats, and other human influences, such as pollution and logging, that have reduced or degraded freshwater habitats. Acidification of freshwater habitats brought about by acidic precipitation is a major, ongoing threat, as is poor marine survival related to substantial but incompletely understood changes in marine ecosystems. There are a few salmon farms in this area that could lead to negative effects of interbreeding or ecological interactions with escaped domestic salmon.

BEAVERS
Influence of rainfall and beaver dams on upstream movement of spawning Atlantic salmon in a restored brook in Nova scotia, Canada
Barry R. Taylor ET AL., 2009
n a restored, third‐order stream in northern Nova Scotia, Canada, we used redd counts over 12 years to examine the influence of beaver dams and the timing and intensity of autumn rains on spawning activity of Atlantic salmon. Most beaver dams in most years had no detectable effect on the distribution of spawning redds, but in 2004 the density of redds downstream from a three‐dam complex was significantly greater than that above, suggesting the dams were a barrier to many fish. A second complex of dams blocked salmon passage completely in 2003 and 2004 until they were notched…Variation in rainfall, and hence discharge, in this flashy brook evidently influences migration and spawning of Atlantic salmon in conjunction with channel blocking by beaver dams.

From News, July 11, 2017
The SRA has been working since 1988 to restore, protect, and preserve the Sackville River Watershed. The restoration work not only involves the main Sackville River, but all its tributaries; the brooks that represent spawning habitat for the Atlantic salmon. The latest river restoration project the group is working on will provide fish habitat restoration on three watercourses in the watershed – Sandy Lake Brook, Stoney Brook, and the Little Sackville River…“All three of these watercourses have either been surveyed (electrofishing) and have been proven to contain salmon, or are part of a system that has been surveyed and has been proven to contain salmon.

Water Quality Monitoring in the Sackville River Watershed 2015 and 2016
Bill Ernst and Damon Conrad, Sackville Rivers Association November 2016. “While historical data were not extensively searched or analyzed, in comparing the 2015/2016 SRA data with that obtained since the 1950s, it initially appears that water quality has not changed substantially for a number of decades, notably for pH, which was also observed by Watt et al. 2000. Figure 12 presents a calculation of the annual means of monthly field pH measurements reported by Watt et al. at a Sackville River station between the years 1981 to 1995. Those means varied somewhat over that 14 year period, but not substantially [values 4.7 to 4.9] The Sackville Rivers monitoring site which is closest to the Watt et al site is site 1 and the mean annual pH was 5.5 from samples taken at that location, considerably better than the 1981-1995 reported pH.

Mainly due to acid rain, habitat loss due to urbanization, and, in past years, fish blockage due to dams, the Atlantic Salmon population of the Sackville River was believed to have been lost, so a restoration program was begun in the mid-1980s. This was done with the release of hatchery raised fish from a nearby donor river. Although this resulted in early success, recent and continued low marine survival for salmon populations along Nova Scotia’s Atlantic coast have resulted in low numbers of adult salmon returning to the Sackville River. To remedy this, it was decided to continue to supplement resident Atlantic Salmon stock numbers by the introduction of hatchery raised Atlantic Salmon. The Atlantic Salmon that have been stocked in the river are fry and parr (0-1 year old fish) and smolts (1 year fish, ready to go to sea), see below for years and numbers. 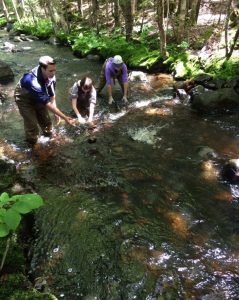 At Peverill’s Brook this summer, we measured the area that needed and could be worked on to determine the amount of digger logs we could install. Among all of our other work, this summers crew (2012) managed to install eleven logs along Peverill’s and enhanced one natural rock sill. We divided the stream into a lower and upper section, between which lies marsh lake. These before and after pictures clearly illustrate the narrowing of the channel widths, and when the water is high, how much oxygen gets plunged into the river as pools get dug out for the fish. 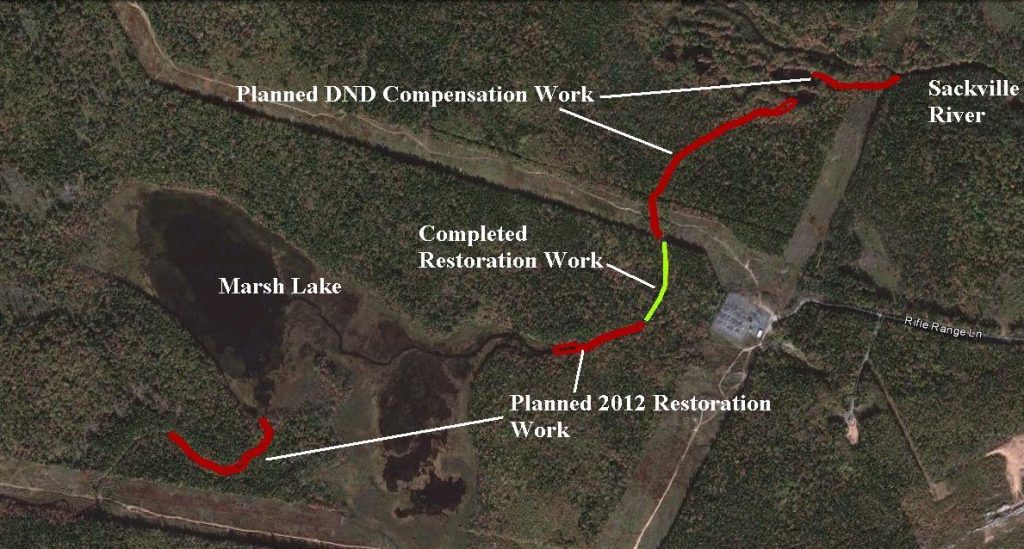 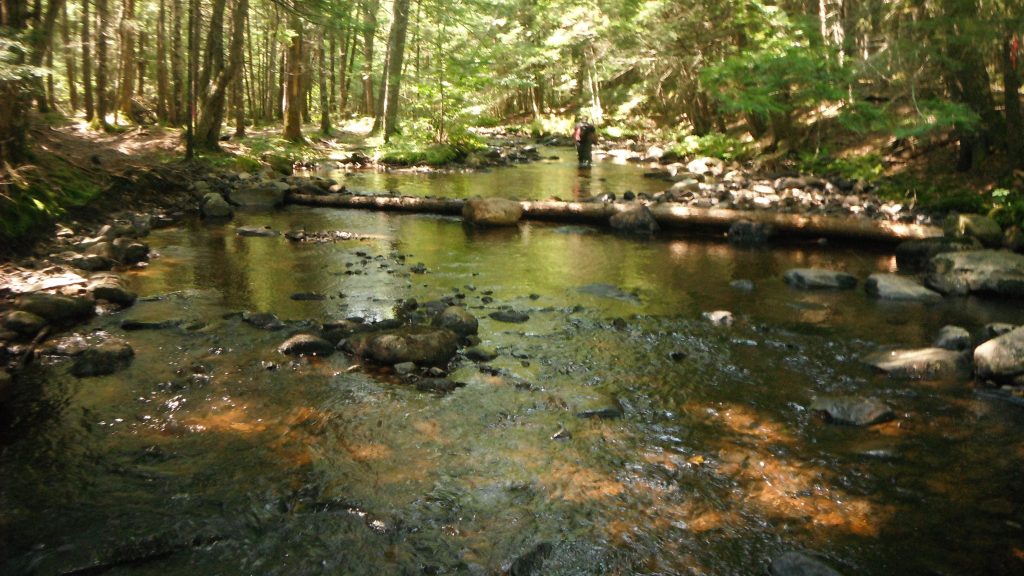 More about salmon in the Sackville River Watershed

1888 Inquiry re: Fishway
1888 “Hon. Mr. ALMON rose to Call attention to the unsatisfactory condition of the Sackville River, in the County of Halifax, and will ask the Government if they intend to grant the sum of $200.00 to improve the Fishway and remove the obstructions in the Sackville River, at the bead of Bedford Basin, so as to enable the Salmon and Trout to get to the spawning ground in the lake from which that river originates?” 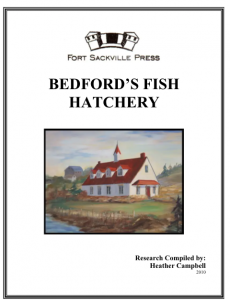 Bedford’s Fish Hatchery
Heather Campbell, 2010. Copied here “In August of 2008, as a part of Scott Manor House’s Heritage Week, Lewis Turner gave a presentation about Bedford’s Fish Hatchery which was based on his own personal memories of the Hatchery, those of other individuals, and the further research he had conducted. This monograph will provide a history of the Fish Hatchery from its beginnings in the early 1870s. It will draw upon Lew’s presentation and other sources.”

Acid Toxicity Levels in Nova Scotian Rivers Have Not Declined in Synchrony with the Decline in Sulfate Levels
W. D. Watt, C. D. Scott, P. J. Zamora & W. J. White
Water, Air, and Soil Pollution volume 118, pages203–229(2000).Review 1980-1981: The 63 Nova Scotian Atlantic Upland rivers listed below contain habitat that is physically suited to the rearing of juvenile Atlantic salmon, but the water quality is impaired by acidification. Rivers have been classified according to the mean annual pH in the main stem of the river near its mouth, and levels of Atlantic salmon survival as indicated by juvenile salmon densities (electrofishing) at a number of sites in all major tributaries
Mean pH <4.7 – Atlantic salmon extinct Mean pH 4.7–5.0 – remnant salmon still surviving in a few higher pH tributaries Mean pH 5.0–5.4 – salmon stock depleted or missing in a few lower pH tributaries [includes Sackville R) Mean pH >5.4 – salmon population not significantly impacted by acidification

New research…Sackville and West are being stocked with hatchery-produced Atlantic salmon,so the electrofishing data are less useful for acidification-related trend analysis.
TABLE III
Water chemistry means from nine Nova Scotian rivers sampled monthly from 1981–1996.
Sackville River pH: 4.85 (field), 4.93 (lab)..
Three of the river sites (Nine Mile, Sackville and Salmon) surround the city of Halifax, N.S. (Figure 1). These rivers can be used to assess the significant effects of local sulfur dioxide emissions (Watt et al., 1979). The Halifax influence is apparent from Figure 2, where the overall (1982–1996) mean sulfate levels for each river are depicted in a west-to-east
arrangement. 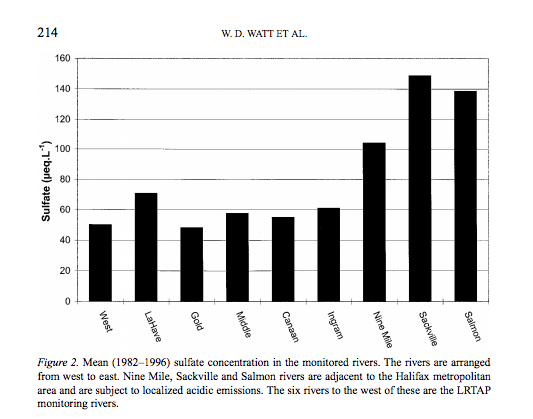 From A Brief Report on the condition of the principal rivers on the south coast of Nova Scotia
By Frederick H.D. Vieth. Halifax 1868. (Obtained from the Internet Archive, their copy from Canadian Institute for Historical Microreproductions)

From the River Fisheries of Nova Scotia
by Thomas F Knight, Halifax 1867

Freshwater acidification research in Atlantic Canada: a review of results and predictions for the future
TA CLAIR ET AL., 2007