Surfical Geology of Sandy Lake and Environs (Map)
Extracted from Digital Surficial Geological Data of the Halifax Metropolitan and Surrounding Areas, NS (2011) Map Map OFM ME 2011-009. These are Lidar based maps.

Physiography and Geology:
Jack Lake Land Assembly is situated within the Southern Upland physiographic region, (Goidthwaite, 1929), which is the southern extension of the much larger Atlantic Uplands, an erosional plain which once extended across the Atlantic provinces (Roland, 1982). This physiographic region underlies most of Southern Nova Scotia. 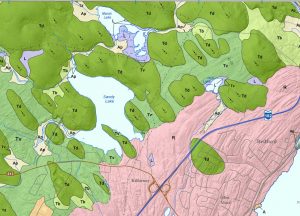 In the vicinity of Jack Lake, the area is characterized by a rolling topography with broad, smooth ridges and hollows generally following the northeast strike of the underlying bedrock. The substantial road cut by the Bicentennial Highway illustrates the structure of these parallel ridges. Field reconnaissance has shown that much of the southwestern portion of the land assembly is comprised of bedrock ridge outcrops with intervening boggy depressions. Rounded hills up to 30 m in height are developed on the bedrock surface on the eastern side of the site. These glacial till drumlins exhibit long axis orientation in a northwest to southeast direction, along the assumed direction of ice movement.The Bedford area of Nova Scotia is underlain by paieozoic-aged (Cambro‑Ordovician Era, 500 miilion years ago) metasediment of the Meguma Formation, which is locally comprised of graywacke and minor slate of the Goldenviiie formation. This is conformabiy overlain by slates and minor Nquartzites of the Halifax slate formation…Figure 4-2 shows the locations of bedrock, drumlins, till and organic soils. Surticial geology mapping indicates that the Jack Lake Land Assembly is covered with a thin (1-2m) veneer of loose to compact oligomictic sandy silt‐till. The sandy tills are developed over much of the resistate upland areas. Superimposed on the basal till sheet are a number of elongated northwest oriented drumlins ranging in thickness from 3 to 46 metres.It appears that most of the lake bottom sediments on Jack Lake and Sandy Lake have been eroded from the surrounding drumlin hills.

The drumlins that occur around Sandy lake and to the north and west are part of larger rich drumlin group called the Sackville Drumlins that are of significance provincially (NSE, Nov 26, 2019). “The Sackville Drumlins are classified as Landscape number 30 and 31 in the Natural Landscapes of Nova Scotia (pg. 34-35) by Protected Areas Branch, Nova Scotia Department of Environment and Labour, January 2002.” (view Sackville River Watershed)

From AECOM 2014 2.5 Surficial and Bedrock Geology

The bedrock beneath most of the watershed consists of metamorphosed sandstone called quartzite of the Goldenville Group (Figure 4). In contrast, the northwest portion of the watershed along the Lucasville Road is underlain by slate-rich Halifax Group bedrock. Sulphur bearing minerals such as pyrite are abundant in slate but are less common in quartzite. The sulphur bearing minerals in the Halifax Group can produce acid rock drainage when the pyrite-containing rocks are excavated and exposed to oxidizing conditions. This acidic drainage may in turn damage aquatic habitats. As a result of the bedrock geology, there is more acid generating potential in bedrock in the northwest portion of the watershed compared to the south/southeast area where the acid generating potential is low (Conrad et al. 2002). 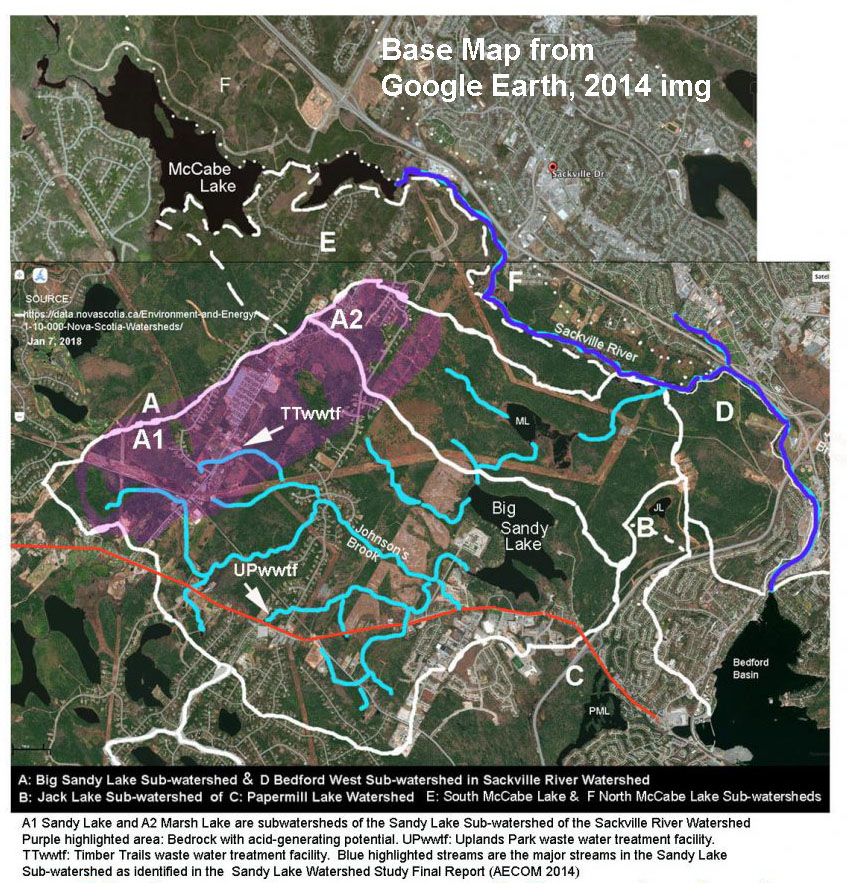