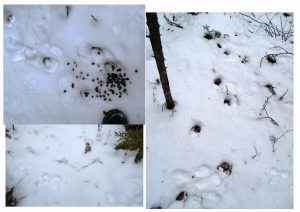 Hare and deer tracks together. Who was following who? Click on image for larger version

On a few-degrees-below-zero day in early February, I set out from Sandy Lake Beach Park  to go to  Marsh Lake. I especially  wanted to see the hemlock-lined Upper Peverill’s Brook in winter, where it flows into Marsh Lake.

Sandy Lake was frozen sufficiently that I could walk on it – but I stayed over shallow water just in case. I headed north and took a right turn at the point I figured was closest to Marsh Lake.  I headed up the drumlin; the ground was frozen with a few inches of snow on top, perfect for walking (I had cleats on) and for walking with minimal impact on the environment. Such days are my favourites for hiking into areas when you have to cross water and wetlands and the like to get to them.

As I crossed the peak of the drumlin and walked downward towards Marsh Lake I started to follow some deer tracks that seemed to be headed in that direction. I figured the deer would be taking the easiest route. There were hare (bunny) tracks as well.  I reached the power line and crossed it, still encountering  the combined hare and deer tracks well into the woods as I approached Upper Peverill’s Brook.

As I was following the deer and hare tracks I began to wonder, who was following who and why? I studied my photos when I got back for any clues. One photo, of hare tracks directly over deer scat triggered a thought – could the hares be eating the deer scat?  I knew that hares and rabbits ‘eat their own pooh’.

Hares and rabbits, the sewellel, or “mountain beaver” (Aplodontia rufa), and some insectivores exhibit a phenomenon of reingestion called coprophagy, in which at intervals specialized fecal pellets are produced. These pellets are eaten and passed through the alimentary canal a second time. Where known to be present, this pattern seems to be obligatory. Reingestion primarily occurs in members of the shrew, rodent, and rabbit groups; however, the behaviour has been observed to a lesser degree in other groups, including canines and pikas. The process appears to allow the animal to absorb in the upper gut vitamins produced by the microflora of the lower gut but not absorbable there. – Encyclopedia Brittanica

I posted my pictures and thought about them on a Facebook site for comment, and it generated quite a few, but it seemed that if hares eat deer pooh, it is not well known or documented. However one naturalist visitor posted this:

I just came across this — not exactly the same thing, but after reading this, I think Hares could be up to just about anything: 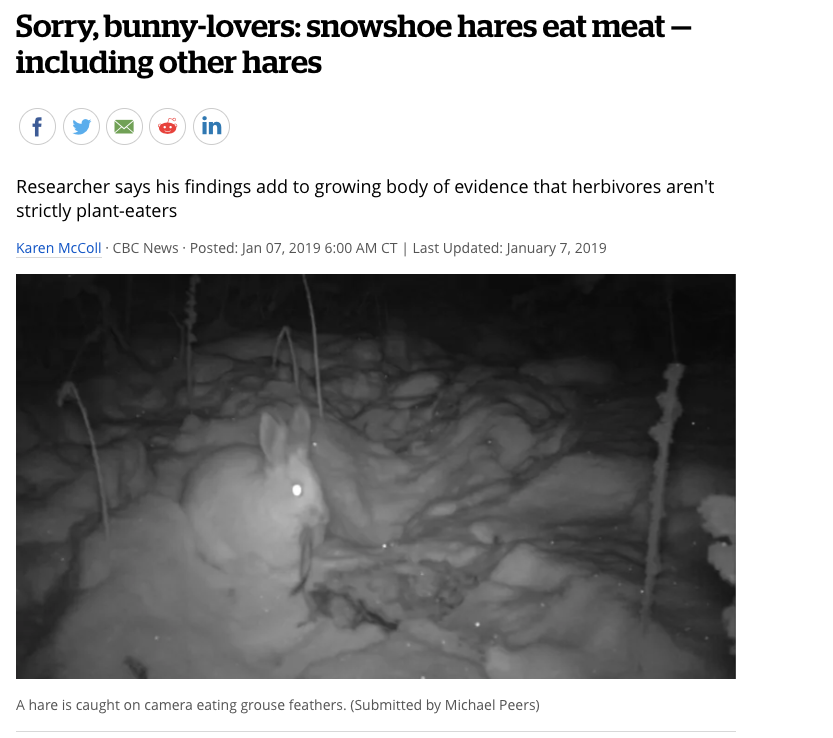 “Hares scavenged 20 of the 161 carcasses the researchers deployed for the study and some of the hares appeared to defend carcasses from other hares.

“There were two other discoveries that shocked Peers. He captured two different hares eating grouse feathers over a several-day period. He thinks his photos are the first documented occurrence of this behaviour.

“Peers found that hares primarily scavenge in the winter. His theory is hares are looking for more protein to add to their seasonal diet of willow and dwarf birch. He suspects the feather-eating also had something to do with protein, but he said it leaves questions about how a hare can digest the feathers.”

So the possibility of the hare following the deer for its pooh doesn’t seem so far fetched.

And Upper Peverill’s Brook was everything I had hoped for. 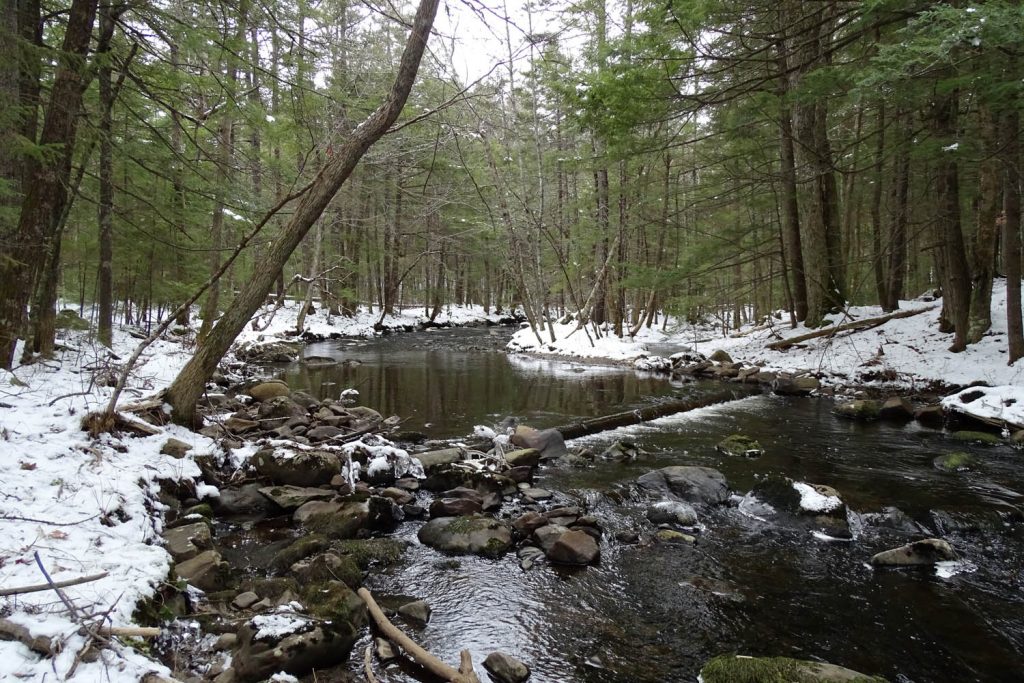