Today is National Parks Day, and we need some good news!

UPDATE JULY 22, 2020: We indeed got some Good News! HRM Council did NOT accept the recommendation of city staff and voted unanimously to approve the $750,000 contribution towards the NS Nature Trust purchase of Connector Lands (see below). I am told over 800 people and groups wrote to council in favour of HRM. That’s impressive. As well, this council has a good record in the relation to the Halifax Green Network Plan – voters will remember that when the fall elections come up.
———————– 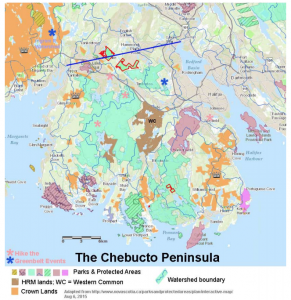 Today is our National and Nova Scotia Parks Day. It’s a day to celebrate and reflect on our Parks and Protected Areas (PPA).

CPAWS, the Canadian Parks and Wilderness Society, released its annual Parks Report Healthy Nature Healthy People, yesterday and appeals to Canadians to Take Action and encourage the federal government to “put parks and protected areas at the heart of recovery” from Covid19, noting:

In June the federal government reaffirmed its commitment to protecting 25% of land and ocean by 2025 and 30% by 2030, which is an important step. Now they need to invest in implementing this promise on the ground.

The recent global pandemic has forced us to consider the link between nature, human health, and economic health and to re-think our future. Investing in nature protection as part of recovery will help rebuild a healthier, more equitable and green society and economy.

Nova Scotia, meanwhile,  has come close to achieving protection of 13% of our land area for wildlife and related recreational activities, but has been hesitant about the last steps towards that goal, even delisting one candidate area. From Once a leader in conservation, N.S. now falls behind, report finds by Katie Hartai in Halifax Today July 16, 2020:

Nova Scotia was once considered to be a leader in Canada for the creation of new protected areas, but in a new report, the Canadian Parks and Wilderness Society (CPAWS) says that’s no longer the case.

Within HRM, it seems that one outcome of our Covid19 experience could be more excuse for HRM not to fund purchases of lands to meet our Green Network aspirations. Thus Staff have recommended against contributing to Nova Scotia Nature Trust’s campaign to purchase “a 560 acre parcel of land– Blue Mountain Wilderness Connector (map-yellow block below). 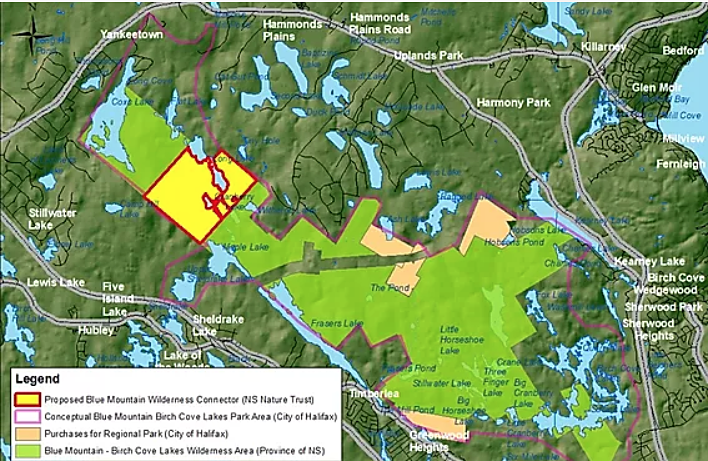 The Nova Scotia Nature Trust, a charity dedicated to the protection of Nova Scotia’s natural legacy through land conservation, signed a purchase and sale agreement in October, 2019 with the owners of a 560 acre parcel of land– Blue Mountain Wilderness Connector (map-yellow block). The block joins two disjunct sections of the Blue Mountain Birch Cove Lakes Wilderness Area.
This block represents a critically vulnerable gap where forestry operations and housing development would have significant negative impacts on the existing terrestrial and aquatic habitats. To acquire and save this block, the Nature Trust has launched its Save the Wild Blue campaign. SOURCE: Friends of Blue Mountain – Birch Cove Lakes

The financial situation as a result of Covid-19 means not only are this year’s revenues impacted, but the future is unknown. Until there is a better understanding of the municipality’s finances on a longer term, it is recommended that Regional Council not approve the request from the Nature Trust, regardless of the merits of the lands…

The topic comes up for discussion and likely a vote on Tuesday July 21, 2020 – View HRM Document

The Chebucto Peninsula has a  high proportion of Parks and Protected Areas and is potentially a highly significant conservation area within Nova Scotia. However without ensuring connectivity between Parks and Protected Areas ares within the peninsula, and across the peninsula to the mainland (e.g., as above and  via wildlife corridors in the Sandy Lake-Sackville River area), those areas will inevitably lose biodiversity and associated ecosystem services.

So we could use some good news on this one.  Letters to Mayor and Councillors re  Tuesday’s meeting and Item No. 11.1.11 about the need to protect an important corridor area will help!

There is a growing realization of the linkages between infectious diseases, habitat loss and climate warming.* Says the World Bank: “We need to treat the health of humans, animals, the economy and the planet as one.”

————————–
*Covidi19 emanated from Asia but we have our own zoonotic diseases (diseases that are carried by animals and have infected humans); one that affects us directly is Lyme. There is a lot of evidence that forest fragmentation has been a major factor contributing to the increase of Lyme disease in north-eastern North America:

Forest ecology shapes Lyme disease risk in the eastern US
Science Daily, July 9, 2018 “In the eastern US, risk of contracting Lyme disease is higher in fragmented forests with high rodent densities and low numbers of resident fox, opossum, and raccoons. These are among the findings from an analysis of 19 years of data on the ecology of tick-borne disease in a forested landscape.” The scientific paper cited: Richard S. Ostfeld et al. 2018 Tick-borne disease risk in a forest food web. Ecology 99(7), 2018, pp. 1562–1573.

Deer, predators, and the emergence of Lyme disease
Taal Levi et al., 2012 In PNAS 109 (27) 10942-10947 “The continuing and rapid increase in Lyme disease over the past two decades, long after the recolonization of deer, suggests that other factors, including changes in the ecology of small-mammal hosts may be responsible for the continuing emergence of Lyme disease… These results suggest that changes in predator communities may have cascading impacts that facilitate the emergence of zoonotic diseases, the vast majority of which rely on hosts that occupy low trophic levels.”