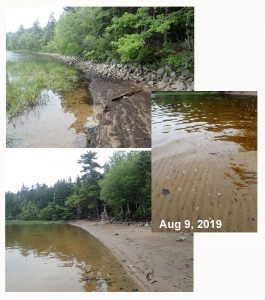 Whatever it was, “it” has largely subsided.

On Wed a.m., Aug 7, HRM took water samples and put up a No Swimming sign; a Risk Advisory was issued later in the day.

At 1:54 p.m.on Thursday Aug 8., the Risk advisory for Sandy Lake was lifted

I looked at the beach area this a.m. (Friday Aug 9, 2019), and indeed there was no longer the bubbly scum where the water meets the shore, and no wafts of suspended material drifting in as observed on Tuesday.

There was still some debris around and walking through the water still left a trail of bubbles, but not as pronounced as it had been on Wednesday. So “it” has subsided.

It’s still not completely clear what caused “it”, it being, apparently or possibly, a bloom of diatoms – that’s according to info forwarded by Councillor Tim Outhit, received from Cemeron Deacoff (Water Resources Specialist, Planning and Decelopment, HRM) on Thurs, Aug. 8:

‘Very grateful for HRM’s quick attention to “it”!