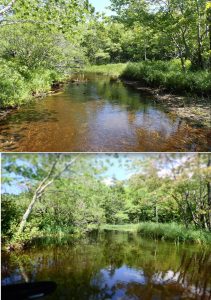 A week or so ago Bruce S. told me why it hasn’t dropped: beavers have been building dams on Upper Perverill’s Brook.

I couldn’t wait to have a look.

This entry was posted in Beavers, natural history. Bookmark the permalink.