These Items will be posted on other pages (eventually)

PHOSPHORUS: CANADIAN GUIDANCE FRAMEWORK FOR THE MANAGEMENT OF FRESHWATER SYSTEMS
Canadian Water Quality Guidelines for the Protection of Aquatic Life, Canadian Council of Ministers of the Environment, 2004

Schwarts, P. Y., Underwood, J. K. (1986). Lake classification in Nova Scotia from phosphorous loading, transparency and hypolimnetic oxygen consumption. Proceedings of the Nova Scotian Institute of Science, 36(1), 13-2 Three indices of eutrophication are used to compare effects of urbanization on seven headwater lakes near Halifax, Nova Scotia. Annual (1983) inputs of phosphorus were calculated and compared with lake Secchi transparencies and rates of consumption of hypolimnetic oxygen (Thienemann index). Results from transparency and oxygen deficits were similar but implied greater eutrophication than did the phosphorus index. Brief discussion of some inherent problems of each index is included.

Underwood, J. K., and P. Y. Schwartz. “Estimates of the numbers and areas of acidic lakes in Nova Scotia.” Proceedings of the Nova Scotian Institute of Science. 39.1 (1990): 11-18. There are 6674 lakes larger than 1 hectare in Nova Scotia covering an area of 2255 kml. Geological and pH isopleth maps were consulted to estimate acidified and acid sensitive lakes. Assuming that granitic or metamorphic bedrock only very slowly produce add neutralizing ions, we estimate that 78% of the lakes (65%of la ke area) would, in the absence of moderating influences of surficial geology and marine aerosols,be susceptible to acidifjcation. When all sources of acid neutralizing capacity are indirectly considered via examination of pH isopleths drawn from lake chemistry, we estimate that 16% of the lakes \26%01 lake area) have zero alkalinity. and that 69% of the lakes (80% of lake area) have < 50 J,teq l- alkalinity.

Factors influencing flux, mineralization and availability of phosphorus in clear and organic lakes in the Atlantic Region.Beauchamp, Stephen 1990 MSc thesis. The availability of phosphorus is especially important because of its role as the primary limiting nutrient controlling the epilimnetic productivity of many lakes. Grahn et al. (1974) were the first to suggest that the continuous input of acidifying substances into aquatic ecosystems might lead to reductions in lake productivity, and coined the phrase “oligotrophication”. Their conclusions were based, in part, on the loss of more alkiphilic plant species (i.e. Lobelia sp. and Isoetes sp.) from the benthic plant community and the subsequent expansion of Sphagnum sp.

Strong, K.W. (1987). The effect of lime on the zooplankton population of Sandy Lake, Halifax County, Nova Scotia. Proceedings of the Nova Scotian Institute of Science, 37(2), 63-70.
Hydrological and morphometric data for Sandy Lake are included in Table I. Prior
to liming, water chemistry of Sandy Lake was typical of lakes on metamorphic rocks in Halifax County (Watt et al. 1979; White et al. 1984). The watershed lies entirely on metamorphic rock of the Goldenville Formation. The lake is fed by two small brooks, and there was no evidence of organic pollution. Surface pH before the addition of lime varied from 4.1-5.1, varying little with depth. Gorham (1957) reported a pH of 5.02-5.18 for Sandy lake in December, 1955, and Watt et al. (1979) remeasured the pH in January, 1977, and reported values of 4.5&-4.58. 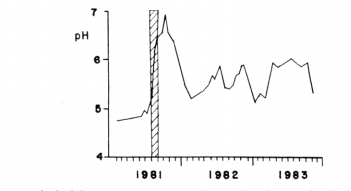 lake pH measurements (average of pH’s of all depths sampled—-depths usually included 0, 1,3,6, 12,16 and 18 m) are presented in Fig 1. The pH increased after the lime application from about 4.9 in August to 6.9 in October, 1981, followed by a decline to a post liming minimum of 5.2 in February of 1982. The pH varied thereafter from 5.4 to 5.8, declining to 5.1 by January, 1983. A similar pattern was repeated during the remainder of 1983. The pH did not return to the low values recorded during the pre-liming period. White et al. (1984) determined that pH increases in 1982 following the February1982 minimum were largely due to increased pH levels in oneof the two inlet streams (their Fig 5); I assume that the same factor contributed to increases during 1983.

Establishing realistic management objectives for urban lakes using paleolimnological techniques: an example from Halifax Region (Nova Scotia, Canada)
Ginn ey al., 2015 Lake and Reservoir Management Volume 31 Of our 51 lakes, 22 (including some experiencing pH, TP, or showing floristic changes linked to climate changes) had increases in measured conductivity (1980–2002) and, correspondingly, increased relative abundances of halophilic diatom taxa. These lakes, often with catchments containing high surface areas of impervious surfaces, are examples of a trend of increasing salinity in northeastern North American lakes likely related to winter application of deicing (road) salt. The application of this paleolimnological approach enabled us to identify which lakes have undergone significant changes in diatom assemblages, as well as which environmental stressor(s) were most probable. This information can help lake managers develop more targeted and effective management strategies.

www.lakes.chebucto.org/
A website developed by Shalom M. Mandaville who has been very active in relation to aquatic issues locally over many years; he led formation of the Soil & Water Conservation Society of Metro Halifax (SWCSMH) “founded on the express encouragement of the Hon. John Leefe and senior staff of the Nova Scotia Environment Department in 1989.” A lot of info on this site.