I found a new spot on the lake. Today in the rain fishing from shore I landed 3 bass and a speckled trout in about 45 minutes. Two bass on a blue fox spinner and the trout and another bass on a Rapala floaitng perch. The trout was about 7″ and the bass ranged from probably 7 to about 10″.

I was there last night a little ways from the same spot, and they were jumping all over the place but nothing would bite. I did pull a 50s era steering wheels out of the lake though!

I didn’t even know there were trout in Sandy lLke.

Memories. When i was a young guy we used to fish Sandy Lake Walked back to it from Bedford, when I lived in Bedford. Went up the Bedford Rifle Range Road (nspc) We as young guys, would walk it past Marsh lake, (which we also fished) down the River that ran from top part of Sandy to Marsh, and out to the top half of the lake. At this time very untouched. Had a great time. Trout were all that was there in them days. Thanks for sparking some memories, hope I took nothing away from your thread..

Never caught any trout there, but I’ve only fished it when it’s been warm enough for swimming. It’s one of my favourite spots to go swimming and fishing with my daughter. “Can you take me swimming, Dad? You can bring your fishing rod if you like. Maybe you should bring my fishing rod, too…”

Good news! I took the day off work today and me and my son (almost 5) went back to the same spot. I hooked another trout (of course I let him reel it in) Turns out they are brook trout (not speckled as mentioned above). I’d say there are lots of them in there.

Oh, and the hook came out without any issues. The blood wasn’t from a major wound. I let him go. 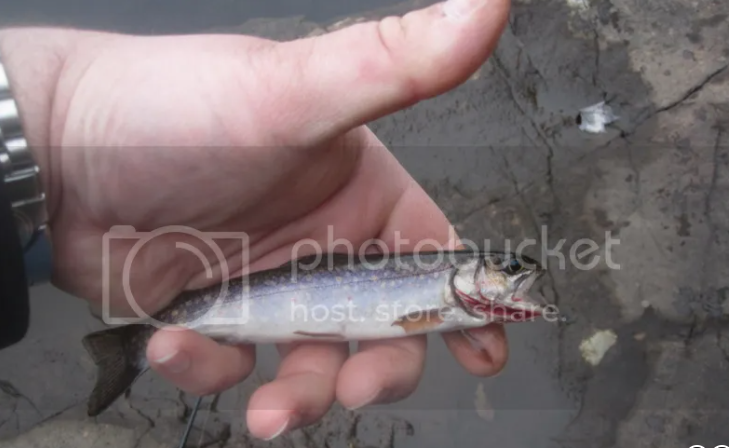 Brook trout and speckled trout are just different names for the same species: Salvelinus fontinalis. Glad to see that you and your son are having some success.

You had a great day King, nice that you and your son can get out. I believe you will find that Brook and Speckled are one of the same Trout, just some give them differencing names. I imagine most here never had the pleasure of Fishing Sandy and Marsh lake back in the early 70’s. Both lakes only had Trout, lots of them too. Then the introductions started. If you ever get a chance take a walk back to Marsh lake, if you go to the upper end of Sandy there is a run from it to Marsh. Not a far walk, maybe a KM. Marsh was beautiful spot. Maybe it is now developed, it has been along time since I was back there.Great fishing story, keep them coming. Edit..Paul beat me to it.

If you ever get a chance take a walk back to Marsh lake, if you go to the upper end of Sandy there is a run from it to Marsh. Not a far walk, maybe a KM. Marsh was beautiful spot. Maybe it is now developed, it has been along time since I was back there.

21 May 2013 Yes Marsh Lake is as its name suggests, however right were the run empties into it from Sandy was easy to fish. Remember as boys building a raft at that location. Cutting trees down with an Axe so as we could go out and fish. Some pretty good memories back there. Jacks Lake was just across from the Bi Hi were I lived, down on Center Street. Jacks had nothing in it. Maybe since then it has been stocked? The rivers back there that went into and out of Sandy and Marsh, the one by the Power station, were pretty good too. That was along time ago however. I remember the Gaspereau runs from Marsh to Sandy as well. The run was full of them, Salmon in those days as well. I think that would be right about now? If you actually go I would really appreciate what you saw back there. It was wonderful place when we were young, I spend so much time back in there, almost became my home.

Cool I never figured there were trout in Sandy. I do go there now and then in the summer for Bass. There are quite a few but there are soooooooooo many tiny ones. Seems I have to go through a ton of mini bass before landing a decent one

Took my two oldest (6 and 4) to Sandy lake last night. My son and I each caught 3 bass, with four of them being in the 12″ plus range in size. The fish were going for everything we threw out there. He caught his three on a berkley salamander. I kep getting hits, but figured my soft bait was too long, so cut it in two and split the end into two, and bam! Worke dlike a charm.

My daughter caught her first fish too. Nice bass, at least 10-12″. 7 fish in 90 minutes was pretty good, but I had probably 20 get off my line in that time too.

I hiked in to the Sandy end of the run today, but didn’t make it to Marsh. Lots of small SMB and a single brookie that you can see in the gallery. The trail in was a bit sloppy in spots and there were some downed trees, but it only took about half an hour. Looks like there’s access from another direction based on the OHV scars that I encountered on the far end of the trail (I entered from the beach). Here’s a picture that might bring back some memories:

How big is the stretch of water that runs between Sandy and Marsh lakes? I’ve never been 9on that side of the lake and I’d love to kayak up it as far as I can once I get my kayak, but you can’t really tell how big it is from maps.

really appreciate the photo and snap shot of what you encountered. I sure remember the beach. As you go further up the river it becomes less swampy and more wooded, less open meadowed areas as in your Pic and the water is a bit faster. Again this is what I remember from decades ago.That was so long ago too. I would not be surprised with the OHV trails though there either. Too bad about Bass in there, it was only Trout back in the earliy 70’s, as well as Salmon from the Sackville River and of course big runs of Gaspereau. Maybe one of these days I will hike back the Power line and go into Marsh where we did as kids. KOC, it would be around a KM from Sandy to Marsh, at least that is what I remember, Google Earth shows many bends and twists, we shortened that as I am sure you can imagine. We did not need trails or paths, we went straight through the woods. I guess I still do today too. LOL

That area was not populated much when we were kids, now Bedford/Hammond’s plains road is just another part of the city.

There is actually a new development shortly before the Kearney Lake/ Hammonds Plains intersection that they are calling Sandy Lake West or something like that. I hope it doesn’t involve lots on the actual lake

Posted 05 June 2013 Was fishing there all day today. One side of the lake was loaded with massive schools of Gaspereau so I moved to the other side. Was a weird day between 1pm-4pm landed about 15 fish between 6″ and 9″ (most of them closer to 6″ – really small). Then between 4PM and 5:30PM I landed 3 more and they were all about 12″ or a little bigger. Was just really weird they were so small til supper time then the last 3 were big (well atleast a decent size). Never changed lures the whole day — all fish were caught on a cheap 5$ walmart minnow (Blaze). I guess the big ones just didnt get hungry to supper time

We spent time on the lake in the early 1950s when I was about 7 and I was mad about fishing. In those days there were abundant resident populations of brook trout, yellow perch, eels, catfish and minnows. There were also migratory schools of suckers and gaspereaux but I never saw or caught par, smelt, girls or salmon in those days. As time went by it seemed that the perch, catfish and trout populations dropped off.

As I got older I started fishing all over the province and wasn’t as knowledgeable about this lake’s stocks.

Nowadays there seems to be no residents other than smallmouth bass—but I haven’t fished eels or catfish in ages and they are fished differently than other species—so there may still be some around. Those bass can be seen patrolling everywhere in the lake so I imagine they’ve made short work of most young fish of any species breeding here outs.

That said, several years ago I was casting a fly from the shore one evening and caught nine par. That was the first and only time I saw or caught them in Sandy Lake. I did see a grilse jump clear of the surface a year or so ago.