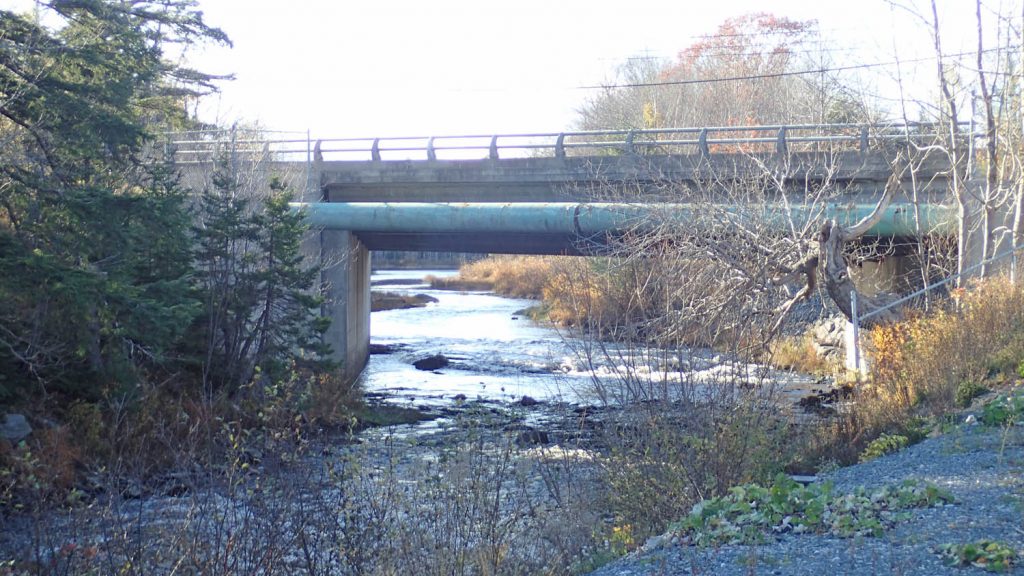 One such pinch point in the proposed Sandy Lake-Sackville River Regional Park lies at its NW corner where there is only a narrow band of undeveloped or minimally developed land bordering the Sackville River.

NW Pinch Point – the envelop
(area circled in the images).
Click on image for larger version

Specific Pinch Points are not shown in the the Halifax Green Network Plan (HGNP), rather Map 1 in the HGNP shows Ecological Open Space values which incorporate 23 or 24 “elements” of which “Connectivity Pinch Points” are one.

Without access to the original database, I don’t know if the “NW Pinch Point” – as roughly and somewhat arbitrarily defined in the maps above – was identified as a pinch point in the Green Network study. However it does lie within an area  of “important corridors” (Map 5, p 37 in the HGNP) so is clearly significant.  It is narrowest where the river flows under the bridge, with only a brush of land, but the land is also squeezed by existing or planned development for about 350 m upstream from the bridge, and a kilometer downstream. It is the downstream portion that is included in the proposed Sandy Lake-Sackville River Regional Park. 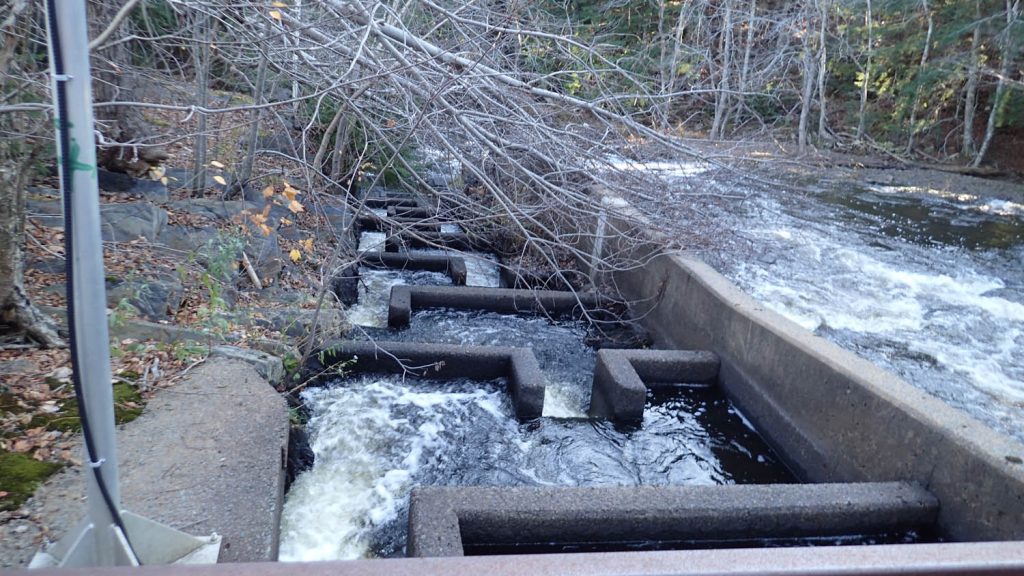 Fishway by Hefler Lumber, maintained by Sackville Rivers Association.
It’s open to visitors, just check in at the Hefler Office to sign in
and get safety gear required to walk through their property

The pinch point is significant for both aquatic and terrestrial flora and fauna. Over the section of the river included in the envelop above, the river is fast moving and drops circa 20m, in sections very sharply and over bedrock notably by the fishway; the fishway, installed by DFO and Sackville Rivers Association in 1990, dates back to the 1880s conceptually; today it is maintained by the Sackville Rivers Association and is the site of a fish counter.

Just downstream from the envelop is Walkers Pit, a once quarried area that has been renovated through the efforts of the Sackville Rivers Association and now is a significant spawning area for salmon. So maintaining integrity of forested land bordering the river in this area is especially relevant to ongoing efforts to improve habitat for salmonids and other river life. 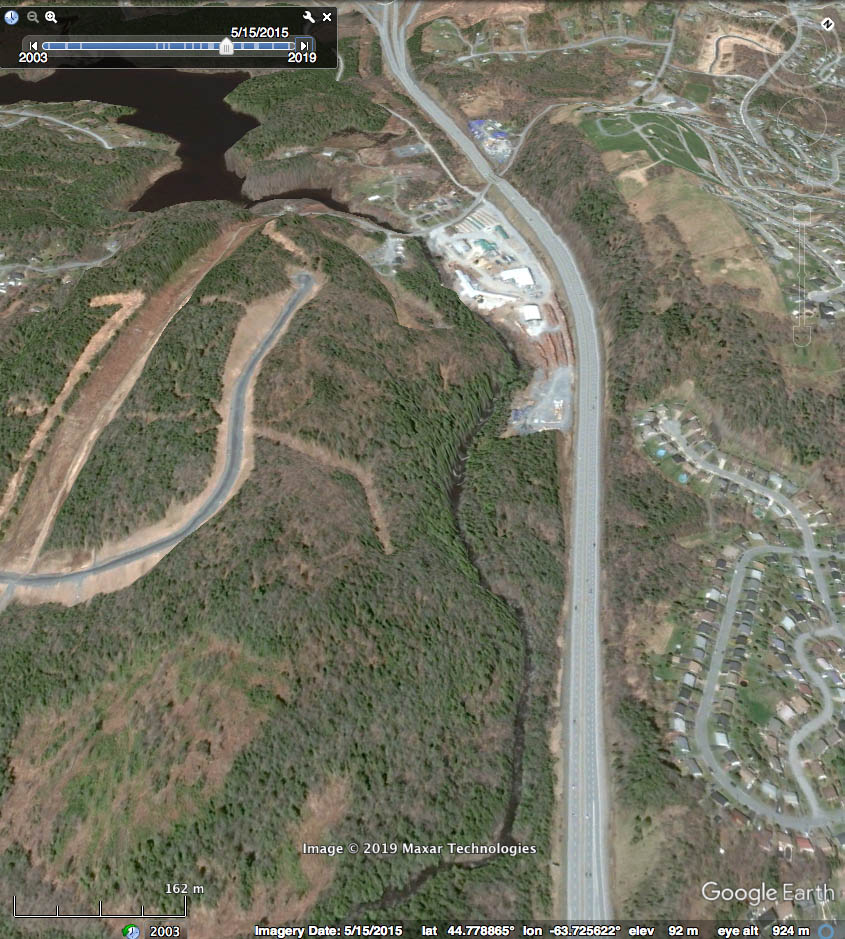 Perspective looking upstream from about 1 km downstream from the Lucasville Road bridge. The image was taken on May 15, 2015 when deciduous trees had not begun to leaf out; hardwood-dominated forest  towards the upper parts of the drumlin at left  and hardwood riparian forest by the river on its  N-NE margin (to the right in the image above) appear as grey/brown areas; lower down on the drumlin and close to the river  the forest is dominated by hemlock. Note the slope down towards the river on the drumlin side, and new development (roads) just above and on that slope.

The steeply sloping forested margin of the river on the south/southwest side at the bottom of the drumlin (at left in the image above) is mixed Acadian forest dominated by hemlock, but with significant yellow birch, red spruce, white ash, red maple and sugar maple; it is mostly mature forest with patches of large trees, snags and a pit and mound topography, i.e. features of Old growth. Forest on the north/northeast side (at right in the image above) is mostly hardwood and much of the area is  seasonally flooded, i.e. is riparian forest.

Mature-to-Multi-aged/Old Growth forest is now highly fragmented throughout NS, and most of our riparian forests were lost years ago to settlement and farming. Going upstream, the forested margin of the river narrows to next-to-nothing at the Lucasville Road bridge and then opens up again by Webbers Lake.  So clearly it is a pinch point for movement and genetic exchange of terrestrial flora and fauna of older forest and riparian forest, and a critical area of the river for aquatic life.

View Google Earth Images and Topographic and Property Maps and Photos to get more sense of the topography and “the squeeze”.

As throughout Sandy Lake and Environs, there has been a lot of forestry conducted in the area but not by clearcutting and the forest is still mostly a mature forest. Within approx. 50 m  of the river there are patches with “Big Trees” (trees over 2 ft or 1/2 m diameter at breast height), and features of Old Growth such as large snags and a pit and mound topography. A ‘walk by the river’ is a pleasant one. 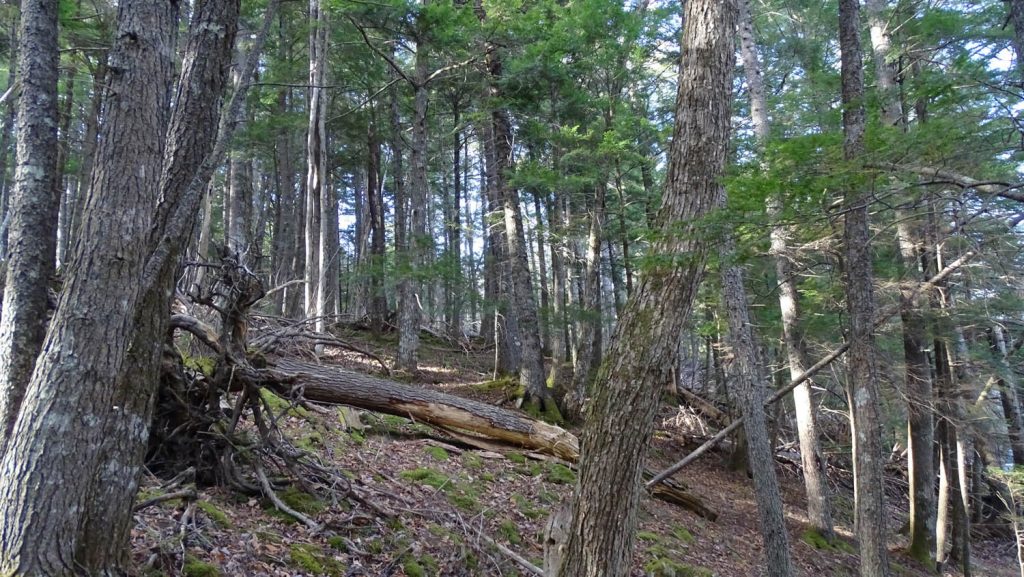 While this “pinch point” is a result of older and more recent development, including roads, that development occurred in its time without the flags that have been raised over the last few years in conjunction with the development of the HGNP.  Hefler  Lumber,  a business with entirely local roots dating back to 1866, was established in this area when there really wasn’t a significant pinch point. The more recently planned  developments, e.g. along Savoy Ave., were planned before the larger community had begun to consider “Green Network” issues.

Fortunately, these are low density residential developments and in general people choose to live is such areas because they appreciate the natural landscape around them.  Through the work of the Sackville Rivers Association in the area – at the Fishway and at Walker’s Pit only a little way downstream, the aquatic habitat has actually improved over the last 20+ years and there is high public appreciation of their efforts.

Hopefully future development in the area will give appropriate attention to connectivity re: the HGNP and the recently passed amendment to the Regional Plan. 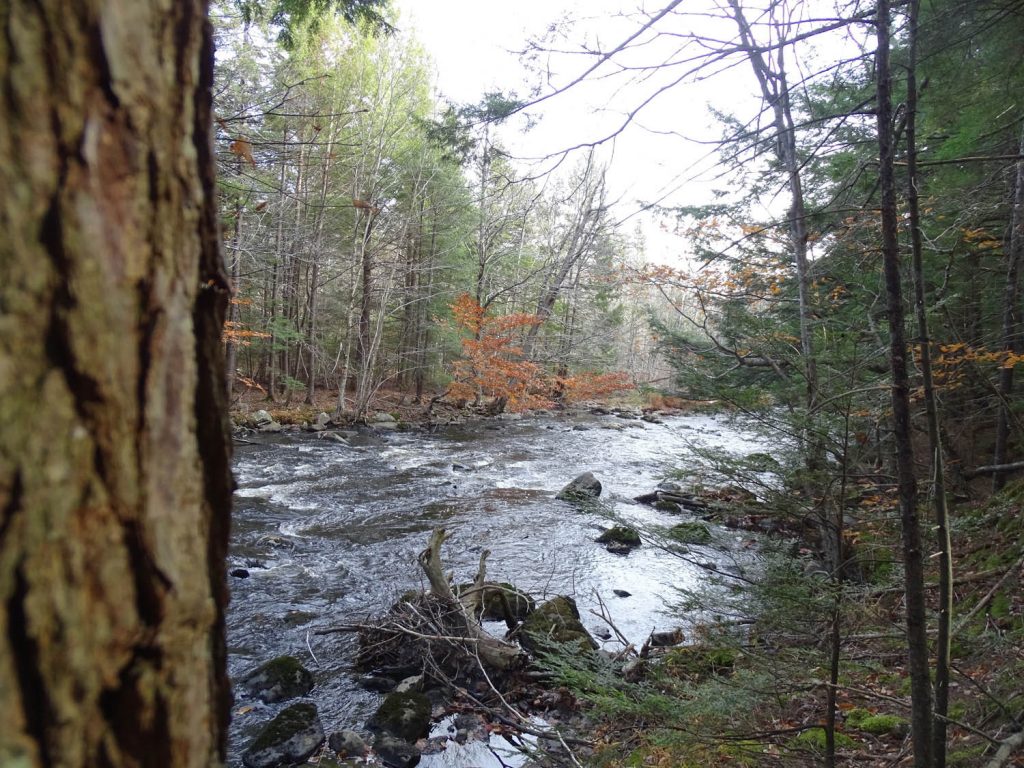