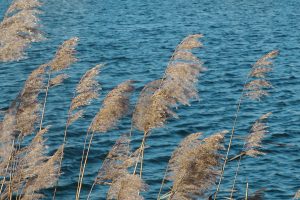 TOPIC: Catling & company on invasive Phragmites in the Maritimes
From posts of NatureNS Listserv, available publicly under Birding News

Listening to the discussion of the Tantramar marshes on the Sunday
Edition yesterday, and not hearing any discussion of invasive European
Phragmites there, I’m forwarding this warning from 2004, and from 2010 –
https://karstaddailypaintings.blogspot.com/2010/10/view-from-beausejour.html
– in the hopes that there’s some possibility of action.

from the 2010 report: “This is the one place in the Maritimes where the
invasive European Phragmites australis subspecies australis has been
reported, so we are interested in seeing how conditions here compare to
what we’d observed elsewhere in New Brunswick and Nova Scotia… we
drove the busy road across the marshes both ways, waypointing stands and
taking representative specimens…

“The first thing we noticed was that the stands were very distinctly
divided into native-like and invasive-like kinds: we counted 11 alien
and 7 native stands, and only 1 that we called ambiguous, though the
natives graded out into little whisps, and we doubtless missed some of
these which an observer on foot could have waypointed. The most striking
feature of this difference was the persistent green foliage of the
aliens, in contrast to the shriveled get-ready-for-winter brown of the
natives (one often sees that alien plants from NW Europe retain green
leaves far longer than native plants do).

“Those on NatureNS will remember that throughout Nova Scotia we were
perplexed by the intermediacy and confusing morphology of the majority
of the Phragmites stands we sampled there: at Tantramar there was no
ambiguity, and the natives didn’t look much different from the ones we
see in Ontario”.

Those of us in Ontario have seen how completely the invasive Phragmites
can take over wide areas, and really wish action could be taken in the
Maritimes before the task becomes impossible.

I urge you to read the appended article (which has just come out in
BEN), very carefully, and to take action to suppress stands of the alien
race. All you need to do is to drive along the eastern shore of NB, and
then drive along the shore roads of New Jersey (solid alien Phragmites
as far as the eye can see), to envisage just what you don’t want your
province to become. The Fundy shore is more different from New Jersey,
so the geomorphic comparison isn’t so close, but solid stands of
Phragmites would be equally undesireable there.

An alien race of Common Reed (presumably the European _Phrag-
mites australis_ (Cav.) Trin. ssp. _australis_) has been rapidly
spreading along roadsides and invading and dominating wetlands
in parts of southern Ontario and Quebec since the early 1990s
(Schueler 2000a, b, Robichaud & Catling 2003, Catling et al.
2003). The invasion and domination of native plant communities
led to a substantial reduction in native biodiversity (e.g.
Catling et al. 2003, Lavoie et al. 2003). Very recently the
status of the alien race has been clarified in other parts of
Canada (e.g. Martin 2003, Schueler et al. 2003). However, in the
Canadian maritime provinces its status has been unclear until
recently when both field study and a database of herbarium
records was completed. The herbarium records database includes
data from all major herbarium collections in Canada (including
those of particular importance with regard to the maritimes such
as ACAD, CAN, DAO, MT, MTMG, NFLD, NSPM, UNB). The value of
herbarium specimens in understanding status and spread was
increased when a method of distinguishing the races using the
floral character of lower glume length (Robichaud & Catling
2003) made it possible to identify many herbarium specimens
lacking the distinctive lower stem characters. The alien in-
vasive race was distinguished from the native race by having
first glumes 4.1 mm long or less and lower stem internodes
yellow or brownish instead of reddish-purple (Robichaud & Ca-
tling 2003). A chemical method for distinguishing the races has
also recently become available (Saltonstall 2003). The following
notes, arranged by province, are derived from response to
several questions regarding the status of the alien race in the
maritime region.

The only record is that of a specimen collected from Stephen-
ville Barachois by R. Day in 1991 (DAO). The native race has
apparently not been recorded in the province.

Of the locations mapped by Hinds (2000, p. 606), only that
collected from 2 km S of Beaver Dam in Sunbury County by H. R.
Hinds in 1981 (MTMG, UNB) was referable to the introduced race.
A depauperate specimen from the salt marsh at St. Louis Cape in
Kent County collected by P. R. Roberts and B. Pugh in 1965 (UNB)
has a lower glumes approx. 4.0 mm long but lacks stem and was
not assigned to race. In 2003 the alien race was collected by P.
M. Catling at two locations on the Trans Canada highway at
Sackville (DAO). Here it occurred within 20 m of the paved edge
of the highway. From here it may spread into the adjacent
Tantramar Marshes and displace the native race of _P.
australis_, (which is presumably referable to ssp.
_berlandieri_, see Fernald 1932). Schueler (2000b, 2002) found
_Phragmites australis_ absent from sides of major roads in New
Brunswick (and Prince Edward Island) so that the occurrence in
the Sackville area along the major highway is almost certainly a
recent phenomenon. This conclusion is supported by the small
size of the clones present, i.e. only several m2.

At the present time only the native race is known from Prince
Edward Island and it is considered rare in the province (Day &
Catling 1991). It was collected from the Dunk River estuary in
Bedeque by M. L. Fernald and H. St. John in 1914 (CAN, MT) and
later by D. Erskine and A. J. Smith in 1953 (DAO, MT). Plants
reported from Lennox Island (Day & Catling 1991) have not been
seen.

Most of the locations mapped for Nova Scotia (Roland & Smith
1969, Zinck 1998) represent the native race. The obvious excep-
tions are the specimens from Annapolis Royal and Bridgetown. The
alien race was first collected at Annapolis Royal in by J.
Macoun in 1910 (CAN), and subsequently by M. L. Fernald and B.
Long in 1921 (ACAD, CAN, MT), by H. E. Perry and M. V. Roscoe in
1928 (ACAD), by G. C. Warren in 1938 (ACAD), W. G. Dore in 1940
(DAO), F. Kinsman in 1949 (DAO), M. S. Brown in 1949 (NSPM), P.
Douglas in 1949 (NSPM), J. R. Jotchan in 1978 (ACAD), E. Specht
in 1979 (ACAD), P. M. Catling, S. Carbyn and J. Achenbach in
2003 (DAO). It is believed in Annapolis Royal that the alien
race was introduced with straw on trains carrying Elephants and
other circus animals in the early 1900s (J. Achenbach, pers.
comm.). It is locally called Elephant Grass. For many decades
the occurrence of this gigantic (to 4 m tall in one season)
grass in and around Annapolis Royal was recognized as a remark-
able occurrence. Interestingly the Common Reed growing around
Annapolis Royal was used to thatch a restored Acadian dwelling
in the same way that the Acadians used the native race. Prior to
the dyking which began around 1700, the native race may have
been much more abundant in the Fundy tidal marshes.

The alien race was also recorded relatively early at Bridgetown.
Here H. G. Perry and M. V. Roscoe made a collection in 1928
(ACAD, MTMG, NSPM). Despite the continuity of collections from
Annapolis Royal, there was a gap of 44 years until another
locality of the alien race was recorded, this being from South
Brookfield where it was collected by P. L. Comeau and J. M.
Stanley in 1972 (NSPM). There are several more recent collec-
tions; Big Pine Lake by M. Zinck and R. Ogilvie in 1992 (NSPM),
Sable River by R.E. and R.B. Newell in 1993 (ACAD), south side
of Annapolis River at Middleton by P.M. Catling in 2003 (DAO),
junction of Trans Canada Highway 104 at Highway 102 by P. M.
Catling (DAO), Highway 101 at Grand Pré by S. Carbyn in 2003
(DAO), 2 km W of Dodge Road overpass on Hwy 101 3 km W of exit
17 (Kingston/Greenwood) by S. Carbyn in 2003 (DAO),1 km W of
exit 16 Hwy 101(Aylesford exit) by S. Carbyn in 2003. All of
these are within 20 m of a paved road suggesting that vehicles
and roads are the means and pathway of invasion.

Although the alien race became established in the maritimes
almost 100 years ago, it appears to have spread only recently
and is apparently spreading by means of vehicle traffic on
roads. This parallels the situation elsewhere in eastern Canada
(Catling et al. 2003). Although the alien race is invading
agricultural land, including cornfields in southern Quebec, its
most serious impact to date has been the replacement of diverse
native vegetation in wetlands with significant loss of biodiver-
sity in general. Considering its impact on Atlantic coastal
marshes in the United States (e.g. Blossey 2002, Marks et al.
1994, Meyerson et al. 2000), marshes along the St. Lawrence
River (e.g. Lavoie et al. 2003) and wetlands in southern Ontario
(pers. ob.), it is considered a threat to the biodiversity of
the Bay of Fundy marshes. Since its spread into much of the
region is recent, there is an opportunity for regional control,
especially around major brackish marshes. For example, invasion
of the upper levels of the Tantramar Marshes, at the head of the
Bay of Fundy, may be prevented by eliminating patches invading
along the Trans Canada highway (hwy 104), and monitoring the
adjacent marshlands.

Jef Achenbach of Annapolis Royal assisted with field work in the
Annapolis valley region. The development of a database was
supported by the Federal Biodiversity Information Partnership.

Schueler, F. W. 2000b. GPS Surveys for _Phragmites_ and other
invasives. _SER Ontario News (Newsletter of the Ontario
Chapter of the Society for Ecological Restoration_) 6(1),
Spring 2000. 2pp. www.serontario.org/pdfs/may00.pdf

Phragmites australis ssp. australis occurs at various places on many of the 100 series highways (103, 101, 102 , 107 ). While it is good to eliminate the plant where feasible, there is a trade-off between the pain (e.g. the disturbance of herbiciding areas of the Tantramar) and the gain. From a terrestrial wetland point of view, I can’t vouch for the biodiversity value of the Tantramar–it seems an anthropogenically disturbed landscape, but correct me if mistaken. There are good reasons to eliminate Phragmites australis ssp. australis where it is scattered along these 100 series highways because they are small patches and conduits to high biodiversity wetlands throughout the province…e.g. the marshes of the Musquodoboit valley or riparian marshes of SW Nova that support the native subspecies americanus.

The native subspecies is more delicate, the culms are thinner– usually reddish (vs. green-yellow)–and in my experience, they are most common on wind-exposed, lakeshore fens. While ssp americanus has a S4 ranking, I would say it was rare.
Nick
————————————————————
COMMENT BY D, WEBSTER
* this reply doesn’t distinguish between the native and invasive forms
of Phragmites.

> Some decades ago the east coast had this “dire problem” of purple
> loosestrife. The seeds of this plant float in water so it spread down
> ditches rapidly and the ditches became full of this plant. This was
> perceived to be a problem ! When in fact free erosion control was really
> a blessing.
>
> Phragmites does very well in saline or fresh soils or swamps where
> nothing else can grow well. In the Netherlands it has been used for many
> generations to ripen polders recently partioned from the sea. Because
> the plants has much aerenchyma in the rhizomes it can prosper in
> anaerobic, structureless, undrainable soil. And decay of these rhizomes
> overtime gradually generates structured, fertile, drainable soil.
>
> In NS it has become far more widespread than it was 70 years ago
> due to mowing of 100 series ditches and I presume accidental spreading
> of rhizomes on machinery parts.
>
> No doubt the Tantramar marshes have a problem; an ocean which keeps
> rising.