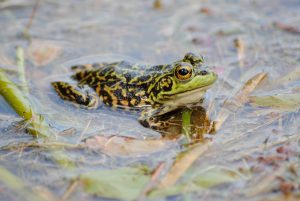 There has been an interesting discussion on the NatureNS listserv (reported publicly on Nova Scotia Bird News by Date) about Mink Frogs.

Heard a new (for me) sound at a marsh this morning in E Dalhousie, Kings. A wooden “cut, cut, cut” was sounding from the grassy edges all around the pond at intervals for the first time this year so I recorded it. Obviously, it was a frog and the call matches that of a Mink Frog perfectly. Wondering about their distribution in NS? I read they are much less common than other frogs. And they are often not covered in local guides such as Summer Nature Notes for Nova Scotians by Merritt Gibson (I have an old copy). Not finding much on the internet either. Info appreciate

Some of the follow-up comments:

…they’re very aquatic, and spend a lot of time on lilypads. The story is told that when Sherm Bleakney was doing the first survey of NS herps in the 1950s he missed Mink Frogs entirely in his first summer, because they jumped into the water immediately, and left only Green Frogs on the shore to be noticed. Also, they sometimes call during daylight, but usually they ramp up their calling around midnight, and come to full chorus around dawn, so, in addition to looking very much like Green Frogs, they’re generally situated out of the notice of human observers. – FS

Thanks for bringing this up I heard them at Wentzell Lake in Back Centre this morning (June 21) and it would not have occurred to me that they were Mink Frogs if not for this post. I first thought it was someone tapping with a hammer at the campground across the lake. It is certainly not a call that has peaked my interest in the past. I did manage to get some audio but they are quite difficult to pick out among the Blackbirds and other noises. – JH

They are at Angevine Lake, Cumberland County on the Northeast side mainly – MM

It’s not a frog I am familiar with, but given the presence and  generally   high numbers of several species of frogs and of lots of suitable habitat at Sandy lake & Environs, I will be looking and listening for it.

Another species not yet recorded for Sandy Lake is Pickerel Frog which “are often found associated with Mink Frogs in vegetated water habitats and with Northern Leopard Frogs in land habitats.” So we should be on the lookout for that one too. (There has not been a formal survey of amphibians at Sandy Lake & Environs.)

View this NS Museum website for more about frogs in our area.

UPDATE: just after I made this post, I thought I better check the iNaturalist project for Sandy Lake & Environs and see if either Mink Frog or Pickerel Frog have been reported there; sure enough Ben Armstrong caught a pic of Mink Frog by Sandy Lake on Aug 13, 2018. Interestingly, he posted it originally as a pic of Green Frog, but following discussion on iNaturalist identified it as Mink Frog based on some pretty subtle features; that ID seems to have stood up so far as the correct ID – some more observations of Mink Frog at Sandy Lake & Environs would help!