There is a  well documented example of  spring turnover being impaired at chloride levels below 120 mg/L* and when summer profiles of temperature, oxygen and EC are similar to profiles for Sandy Lake; it is for Mirror Lake,  (5o ha, 18 m maximum depth) at Lake Placid, N.Y. in the Adirondack Mountains:
______________
*The CCME guideline for chloride ion for the protection of aquatic life for long term exposure; 120 mg/L is equivalent to EC of 470 uS/cm using the AECOM (2020) conversion equation.

Improved monitoring in this oligotrophic lake, initiated in 2014,  revealed that the deepest area of the lake was sometimes anoxic during the summer, also observers  had noted that  chloride and EC had increased substantially over historic levels. They were concerned that salts could be causing some impairment of the seasonal turnover expected for this typically dimictic lake. Biweekly sampling was conducted though all of 2016 and 2017, allowing detailed charts to be drawn up showing the changes in temperature, chloride (calculated from EC values), oxygen and calculated density over the entire water column through those two  years.

The lake exhibited  normal spring turnover in 2016, but in 2017, when the difference between surface and deep water chloride in the January to April period increased   by approx. 1.75 fold compared to 2016, there was no spring turnover.

From the paper (literature citations and references to tables and figures are omitted):

Lake trout are the only native cold-water lake- dwelling top predatory fish in the Adirondack Park… Narrow habitat requirements (cold, well-oxygenated water), slow growth, and late sexual maturity make lake trout particularly vulnerable to climate change, eutrophication, and other stressors. In small upland lakes, like Mirror Lake, lake trout habitat is likely to decline with increasing temperatures. Mirror Lake has demonstrated a significant increase in the ice-free period over the past 114years, with the lake currently experiencing an average of 24 more days being ice-free than in the early 1900s… Climate-driven effects on the lake trout population in Mirror Lake will be further exacerbated by the lack of complete mixing in the spring.

The small amount of historical data for Mirror Lake suggests that incomplete mixing is not a natural occurrence for the lake… Other historical data suggest that incomplete mixing is a more recent phenomenon for the lake. Surveys of the lake in August 1971 and August 1974 generally found hypolimnetic dissolved oxygen concentrations and specific conductance consistent with greater mixing… Despite the low dissolved oxygen in 1974, specific conductance measurements from that day show a 16 uS/cm difference from the surface to the bottom, indicating that there was little or no chemical stratification. A survey on 10 August 2001 found 0 mg/L of dissolved oxygen at 15 m and a difference in specific conductance from surface to bottom of 150.5 uS/cm, consistent with a lack of spring mixing.

We believe that restoration of the lake to dimictic conditions would occur during the spring following a substantial reduction in salt load. The lake has demonstrated an ability to overcome the salt-induced density gradient during fall mixing, and without the establishment of a new gradient the following winter, the lake would mix in the spring. The winter of 2015–2016 offers a glimpse at the restoration potential for the lake. Following a winter with less snowfall and a lower salt load, the lake completely mixed in the spring. Substantial reductions in the application of road salt within the watershed, coupled with stormwater improvements to retain stormwater runoff before entering the lake, would provide marked improvements in the water quality of Mirror Lake.

To facilitate some comparison with the more limited data we have on Sandy Lake, the following stats on chloride were extracted from the Mirror Lake paper; values are approximate as they were interpolated from  charts; chloride values were converted to EC values using the conversion formula for Halifax area lakes given in AECOM (2020). 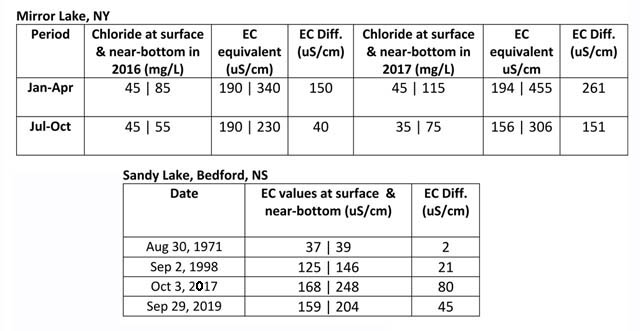 The recent (2017 and 2019) EC values for Sandy Lake in summer are similar to those for Mirror Lake in 2016; while the maximum deep water value for Mirror Lake in 2017  is only 23% higher than the highest deep water value for the two Sandy lake profiles in 2017 and 2019. (That particular profile was obtained when the stratification was breaking down and it’s possible that an earlier sampling would have revealed higher EC in the hypolimnion.)

If seasonal stratification and turnover at Sandy Lake behave similarly to Mirror Lake, it seems  possible that spring turnover in Sandy Lake is likewise being impaired in some years. Clearly, we should monitor the lake profile in the spring when the lake would be expected to be fully mixed,  and in the late summer/early fall to get some assessment of whether spring turnover is being impaired, and of the effects on hypolimnion oxygen during the summer/fall stratification.

Even if such impairment has not occurred to date, it seems clear that that Sandy Lake is on track for some impairment of spring turnover, and very possibly even before salt levels exceed 120 mg/L Chloride/EC 470 uS/cm (the CCME guideline for chloride ion for the protection of aquatic life for long term exposure).

The 2019 report for Mirror Lake provides some detail on Total P status of Mirror Lake: 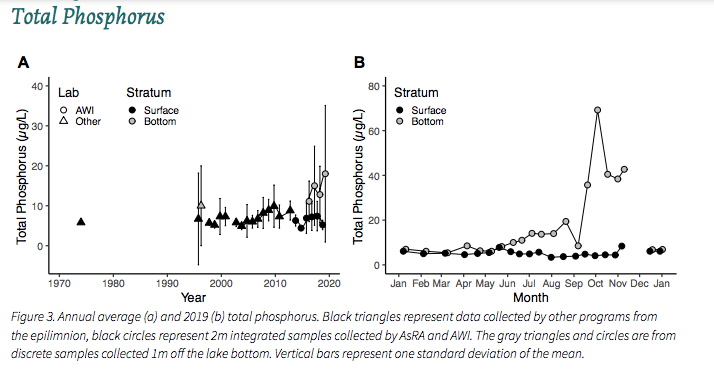 In 2019, total phosphorus concentrations at the surface were generally low and consistent with an oligotrophic lake. Hypolimnion total phosphorus concentrations increased through the summer stratified period. When phosphorus rich organic sediments are exposed to anoxic conditions for prolonged periods of time, phosphorus is released from sediments and moves back into the water column (Wetzel 2001). This results in internal phosphorus loading in the lake. As long as this phosphorus remains trapped in the cold, dark hypolimnion it will not result in increased primary production. However, if the lake were to partially mix during a period when hypolimnion phosphorus concentrations are high, this could trigger an algal bloom. The small surface area and orientation of the long axis of the lake perpendicular to the predominant wind direction, reduces the likelihood of mixing during the summer stratified period. If a strong southerly wind were to create a seiche in the lake it is possible that a portion of the phosphorus rich bottom water could be mixed to the surface and trigger an algal bloom.

How comparable are the two lakes?

Like Sandy Lake historically,  Mirror Lake  is still oligotrophic by the Total P criterion. Nevertheless, in recent years, deep waters in Mirror Lake had elevated levels of Total P due to hypoxia or anoxia   during summer stratification.   Wiltse et al. (2020)  commented that “that incomplete mixing is not a natural occurrence for the lake” and attributed the incomplete mixing to salt stratification during the period of the normal spring turnover.

We have very limited data on deep water Total P in Sandy Lake, but what is available is suggestive of similar patterns in Sandy Lake: for two out of three years in the interval 2008 to 2011 when water samples were taken during the summer from the surface and near the bottom, Total P was highly elevated in the deep water samples (AECOM 2014).

On the other hand, it is equally plausible that the reduced hypolimnion oxygen in late summer/early fall is associated with increased input of organic and nutrients to the lake with increasing urbanization in the watershed; in this context, the “salt signal” is an “urbanization signal” more broadly.   Both phenomena could have been involved in the past. A program of spring and late summer monitoring as suggested by AECOM (2020) should help to sort it all out.

(View From the Air for equivalent views of Sandy Lake.)

Road salt pollutes lake in one of the largest US protected areas, new study shows
www.eurekalert.org NEWS RELEASE 9-DEC-2019 “Mirror Lake is the first in the Adirondack Park to show an interruption in lake turnover due to road salt”, says Dr. Brendan Wiltse from Ausable River Association, who led the study. Mirror Lake, located in the Village of Lake Placid, is the most developed lake within the Adirondack Park – a publicly protected area greater than Yellowstone, Yosemite, Glacier, and Grand Canyon National Parks combined. Like many northern temperate lakes, Mirror Lake experiences ‘dimictic’ turnover – a natural process where wind and less stratified water conditions (layers of different temperature and density) of spring and fall allows mixing of the water column that redistributes oxygen and nutrients throughout the lake. High levels of surface-water chloride were first noticed in Mirror Lake in 2014 when it was surveyed as part of the Adirondack Lake Assessment Program, and so the following year, Wiltse and colleagues began monitoring Mirror Lake more intensely….”