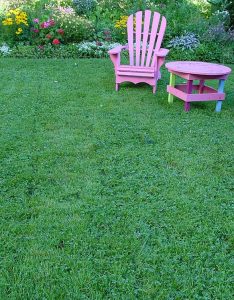 Before herbicides came into common use in the 1950s, white clover was a common, natural and desired component of temperate region lawns.

” The thought of White Dutch Clover as a lawn weed will come as a distinct shock to old-time gardeners. I can remember the day when lawn mixtures were judged for quality by the percentage of clover seed they contained. the higher this figure, the better the mixture…I can remember the loving care which old-time gardeners gave their clover lawns. The smug look on the face of the proud homeowner whose stand was the best in the neighbourhood was really something to behold… ” – In New Way to Kill Weeds by R. Milton Carelton, 1957

Clover quickly disappeared from chemically managed lawns. When it reinvades such lawns naturally, it develops in patches which can look unsightly. So it became known as a weed rather than a desirable component of lawns.

However, there is another approach: overseed and manage the sward so that clover is regularly distributed through the sward. Then the clover forms a pleasing blend with the grass.

Clover can be overseeded into a lawn where it is not present or is present only in isolated patches.

What about the white flowers?

Some people don’t like the white flowers of clover.

Flowering is most intense from late June through to the end of July, then drops off rapidly. Hence, through most of the season, they are not present; also they can be  removed by mowing.

On the benefit side the flowers provide nectar for insects which contributes to biodiversity, and the seeds maintain the clover and allow natural selection for locally adapted types to occur.

Also, clover flowers during the period when Kentucky bluegrass-dominated lawns tend to go into dormancy and look baked out unless well watered.

So one way to think about the flowers is that they are a small price to pay for the benefits.