What’s ripping up the lawns? 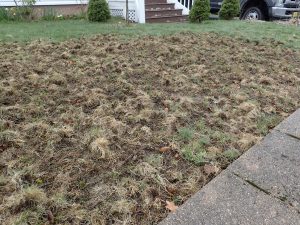 Crows are said to be the culprits. Well really it’s the grubs they are after that are the problem.

I have noticed a lot more crows on peninsular Halifax this spring and am wondering if disruption of the roost at Mt. St Vincent last fall has anything to do with it.

Racoons are also reported to do it as well (at night), and we have lots of those.

One solution – let ’em do it, re-seed it when they are through, and then you shouldn’t have them the next year.

Here are some comments from Y Gardener that might explain some of it:

Soil Conditions That Encourage Grub Problems
Other than proximity there are no particular reasons why grubs attack some plants rather than others. However, the condition of the soil in your yard greatly influences the size of their population and the severity of their damage. First, soil that is thin and infertile because it lacks organic matter has large populations of grubs because there are no naturally occurring beneficial insects in it. Ground spiders and ants that live in the soil and prey on pest eggs and larvae need soil, rich in air and organic matter to survive.

Second, soil that is compacted, as is typical under most lawns, exacerbates grub damage because grass roots are unable to penetrate deeply into the soil deeper than 2 or 3 inches. Grubs which feed on them are concentrated in this shallow zone, so the damage from their intensive feeding is much more obvious.

Other Conditions That Encourage Grub Problems
Grub populations are also normally controlled by various kinds of birds living in or near home landscapes where there is a diversity of plants and wildlife to support them. Yards that are not visited regularly by songbirds have more grubs and plants suffer greater damage than yards where various kinds of birds systematically inspect the soil for grubs and attack adult beetles before they can lay more eggs in the soil.

Also, grubs are more prevalent in yards where there has been frequent routine or preventative use of broad-spectrum insecticides. These products kill bad and good insects indiscriminately, so nature’s first line of defense–the beneficial insects–is eliminated along with the pest insects. Because pest populations rebound faster than those of their natural enemies, the beetles can reestablish themselves unmolested and begin to lay more eggs unchecked.

I need to look at some more lawns. ‘Lawn Ecology’ is fun!

This entry was posted in lawn. Bookmark the permalink.