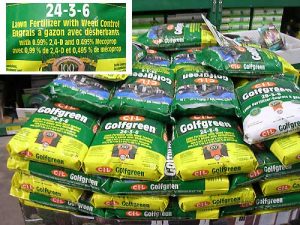 In “Let’s stop being such environmental dunces” (Chronicle Herald, Oct 2, 2018), columnist Ralph Surette cited bottled water and our use of lawn chemicals as prime examples of “low-hanging toxic fruit that is environmentally, economically and logically idiotic — and that must be picked if we are going to make sense of anything.”

About the lawn chemicals he writes:

Recently, I bought a bag of 6-12-12 fertilizer for my garden. In big letters, it read: “lawn fertilizer.”

I was shocked into remembering that this was an issue back in the 1970s when it was pointed out that more fertilizer is used on North American lawns (and golf courses) than the entire Third World uses for farming.

This lawn fetishism has been juiced by the big outfits that sell not just fertilizer but lawn chemicals. This was another slick job done on you, way back when they convinced you that dandelions are evil weeds that have to be zapped with their stuff.

So it’s not just fertilizer. Medical researchers are checking into why golfers have a higher incidence of certain types of cancers than others (and maybe lawn fetishists, too).

Meanwhile, lawnmowers produce some five per cent of American pollution. (If you’re a hopeless fertilizer and pesticide addict, you can always Google the Lawn Care Centre at Purdue University in the U.S. — meant to wean extreme lawnies off the habit while still maintaining a nice lawn.)

“The point is”, says Surette, “that with the world’s climate on the brink, it’s not only time to think about our destructive habits — many of them instilled into us by advertising — but to start doing something about them. We could start with the ones that are economically nonsensical as well as environmentally destructive.”

This entry was posted in Alternatives, lawn. Bookmark the permalink.